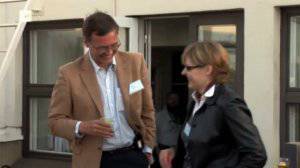 For some time, Scandinavian and Baltic countries began to resemble harbors for terrorists. History this has been going on since the first Chechen campaign, when the Caucasian bandit underground found help and support in these countries. Then the leader of the Chechen separatists, Dzhokhar Dudayev, was turned into a hero of the “struggle for national liberation”, and his death caused furious attacks by the Scandinavian and Baltic democrats on Russia. Today, the memory of the first president of "Ichkeria" is perpetuated in all Baltic capitals. In Riga there is an avenue named after Dzhokhar Dudayev, in Vilnius - a square, in Estonian Tartu - a memorial plaque.


It is known that the countries of the post-Soviet Baltic states, which were quickly adopted by NATO, in their geopolitical confrontation with Russia are oriented towards Scandinavia and Poland. The most active role in the dialogue between the Baltic States and Scandinavia is played by Estonia, which has established close military-political relations with Finland and Sweden. Lithuania focuses more on Poland, but always agrees to support the union of Tallinn and Riga with Stockholm and Helsinki. Poland is also open to a military-political dialogue with the Balts and Scandinavians. It is symbolic in this respect to rename in 2005 one of the streets of Warsaw to Dzhokhar Dudayev street. As a result, a block of states formed near the north-western borders of Russia, where terrorism with North Caucasian roots, squeezed out of Russia, found a suitable refuge.

The extremist Internet resource Kavkaz Center, which was once again being talked about in connection with the terrorist attacks in Boston, once worked from the territory of Sweden, was located in Estonia and Lithuania at one time, but really became the mouthpiece of Chechen extremists since moved to Finland. Here he is looked after by a certain Mikael Sturshe, at whose activity the Finnish authorities look quite favorably. Operating from the territory of Finland, Kavkaz Center successfully plays the role of an “information window” to the outside world for the Emirate of the Caucasus, an organization classified as terrorist in Russia. Characteristically, the US authorities also included the "Emirate of the Caucasus" in the list of terrorist organizations, but do not do anything to neutralize it ...

Rare understanding has developed between the Chechen separatists and the Finnish authorities. Kavkaz Center has repeatedly attacked Russia for its demands on Helsinki to stop even indirectly supporting the propaganda of terrorism. In turn, from the lips of the Minister for Foreign Affairs of Finland Erkki Tuomioja, one can hear the reasoning that the “work of protecting democratic freedoms” knows no state borders, and the protection of human rights cannot be an internal matter of any one country. Understand that by covering the activities of Kavkaz Center, the Finnish authorities are upholding democratic freedoms and protecting human rights. A similar interpretation of rights and freedoms has already come back in Boston and not only there.

Chechen emigrants who fled from Russia, including many former militants, are used by Western countries as a tool of foreign policy. The number of Chechen diasporas in France is reached by 30 000 people, in Austria - 25 000, in Belgium - 17 000, in Germany - 12 000. Many Chechens in Norway and Finland. The Baltic states, like Poland, serve for them, as a rule, as a transit corridor to Western Europe.

In the US, Boston is considered the place of compact residence for Chechens. In 1990, Islamist cells in the United States supported the militants in Chechnya, and the local branch of the Islamist organization Al-Qifah was located directly in Boston. Later, "Alkifakhivtsi" were seen in the preparation of a number of terrorist attacks in the United States, including the World Trade Center in 1993, and most of their cells were defeated. Most, but not all. The Boston cell continued to work, assisting Islamic extremists in Bosnia and Chechnya. The FBI did not touch her.

The Chechen diaspora in Europe, in fact, is assigned the role of an information ram. It does not matter what the foreign Chechens themselves will say, but the Western media will quote only their attacks on Russia and the Russian authorities. Often, even without the knowledge of foreign Chechens themselves, Western “political makeup artists” give them the appearance of anti-Russian power, digging a deep ditch between Chechens in Russia and Chechens in the West, when all Chechens are divided into “good” who emigrated or run through the mountains and forests some in Dagestan, fighting with the federal authorities, and the "bad" who participate on an equal basis with others in the all-Russian social and political life.

Such "quiet" countries like Finland are not always visible in the shadow of the more powerful Western powers. Therefore, many are aware of the support of terrorist networks in Washington and London, but few are aware of Finland’s contribution to this matter. I wonder how long Helsinki will manage to pretend that there is nothing in common between democratic Finland and the support of international terrorism?

Ctrl Enter
Noticed oshЫbku Highlight text and press. Ctrl + Enter
We are
"Bomb Russia at X-hour"Independent Baltic. 1920-1940 Addition to "Were there colonies in Russia?"
Military Reviewin Yandex News
Military Reviewin Google News
23 comments
Information
Dear reader, to leave comments on the publication, you must to register.