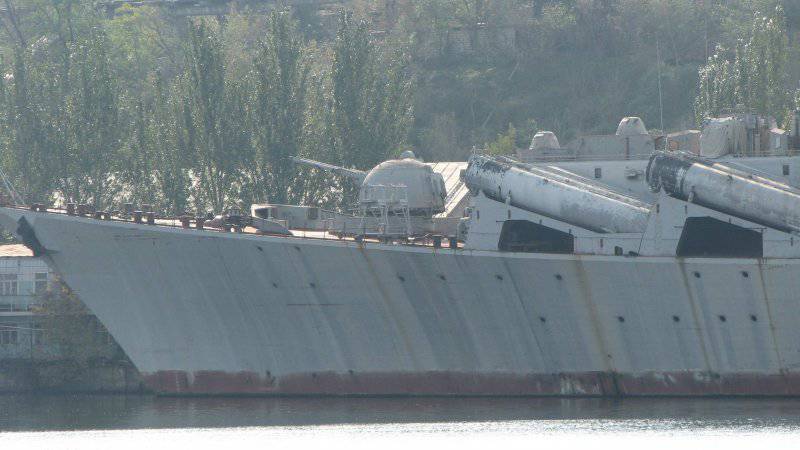 Rocket cruiser "Ukraine" at the wall of the plant "Name of the Communist 61" in Nikolaev. 2008 year

In the Russian and Ukrainian press, materials have repeatedly appeared that improve between then and then deteriorate relations. Similarly, the state of joint projects is changing. Sometimes a very paradoxical picture of potential areas of cooperation between Russia and Ukraine can be observed in the media. In particular, we are talking about cooperation in the construction and modernization of naval equipment. We bring to your attention some projects that, according to print publications, are currently the most promising in this area.

One of the most famous joint projects is, perhaps, the transfer to Russia of the Ukraine 11641 missile cruiser, project 2013. Negotiations on the possibility of transferring the vessel have been ongoing for quite some time, and only in April of this year the parties managed to reach framework agreements. According to information received by the press, the final agreement is expected to be signed in the summer of XNUMX, during the official visit of the Russian Minister of War S. Shoigu to Ukraine. Preliminary negotiations were held between representatives of the naval fleet Russia, USC, the naval forces of Ukraine, as well as the leadership of the state enterprise Shipbuilding Plant named after 61 Kommunar at the end of March this year. The main achievement of the negotiations can be considered an agreement on the cost of the cruiser - it was estimated at an amount equal to 25 million dollars. However, no objections have been received from the Russian side. An agreement was also reached regarding payments: they will be carried out by the supply of spare parts for Soviet-era equipment, which is still in service with the Ukrainian army.

In addition, Russia has undertaken to make orders for Ukrainian enterprises to carry out part of the work to complete the construction of the vessel. This, in particular, is the state enterprise Zorya Mashproekt, which must supply a spare parts kit for turbines of the main course.

Not without misunderstandings. Despite the fact that the Ukrainian side tried to fix the ship’s readiness at the 90 percent level, the Russian specialists who inspected the cruiser (these are representatives of the Zvezdochka CS and Severnaya Verf OJSC) concluded that in reality the ship’s readiness rate was not more than 67 percent. And it is this figure that was recorded in the final documents.

At the moment, it is planned to tow the cruiser to Severodvinsk for troubleshooting (that is, to identify possible ship defects and assess its suitability). According to the results of this analysis, a decision will be made on the possibility of its completion or conversion into a special purpose ship.

The necessary draft agreement is expected to be ready by the end of this year. Moreover, the navy has even proposed names for the cruiser, under which they will become part of the Russian fleet, Izmail and Poltava. However, it is not excluded that Ukraine can become the main source of spare parts for those cruisers of the same type currently operating as part of the fleet.

Recall, the missile cruiser under the name "Ukraine" was laid in 1984 year. True, then he had a different name - “Admiral of the Navy Lobov”. In 1996, its construction was discontinued due to lack of funding. Later, attempts were made to resume construction, but in 2001, they were completely abandoned. And only a few years ago, the completion of the vessel was resumed.

There is no certainty in the negotiations about the possibility of completing the construction of the floating technical base of the 2020 project at the Black Sea Shipyard for the Russian Navy. According to Ukrainian sources, the Russian side considers it possible to complete the construction of the base in the Ukrainian enterprise. It is known that in the near future a large number of old technical bases are planned to be written off and disposed of in the Russian army, therefore the introduction of a new floating base will make it possible to significantly increase the capabilities of the Russian fleet.

Recall that the floating technical base of the 2020 project at the Black Sea Shipyard began to be built in 1990 year. Its main purpose was to recharge nuclear reactors of nuclear submarines. When the base was launched, all work at the facility was stopped due to lack of funding, and later it was decided to freeze it.

About the possible resumption of construction of bases was discussed a few years ago. According to the existing information, the state of the floating base was checked by representatives of a special commission, which included employees of the design bureau - the designer. Then the state of the base was found to be quite satisfactory.

In addition to this project, the Ukrainian side hopes that the Russian fleet will show interest in ordering a modernized Corvette of the 58250 project from Ukrainian shipbuilding enterprises. It is noteworthy that an indirect confirmation of this interest is the working visit of representatives of the Russian industrial and trade department to the Black Sea Shipyard in the current year in order to familiarize with the production capacity of the enterprise. In the framework of the visit, the flow line-point line of the enterprise, outbuilding embankments, inclined slipways and floating dock were provided for familiarization. In addition, information was provided on current ship repair and shipbuilding projects at the plant. Currently, the enterprise, according to the director of the ChSZ V. Kalashnikov, is engaged in repairing the ships of the Ukrainian naval forces. In addition, it is ready to consider proposals on the possibility of cooperation on the modernization of the Russian fleet.

Recall that the corvettes of the 58250 project were designed by Ukrainian designers for the needs of the Ukrainian fleet. Initially it was planned to build 10 vessels of this class, but the lack of funding was the reason that the management was limited to only four corvettes. Previously, the cost of one such vessel will be about 250 million euros, which is lower than the cost of similar European-made vessels. At the same time, there is a possibility that Russia may opt for corvettes of the same class, but with a much lower cost. In particular, we are talking about the British project “Carif” (approximate cost - 252 million dollars), Turkish corvette “MILGEM” (cost - 260 million dollars), German “MEKO A-100” (300 million dollars). In addition, Russia has its own frigates, the cost of which is much lower, but at the same time they are in no way inferior to the Ukrainian ships in terms of their technical characteristics. It is not only about the frigates of the project 20380 (export version - "Tiger"), but also the project 1135.6, whose ships are going for the naval forces of India.

Despite this, the Ukrainian side does not lose hope for a positive result. And in connection with the construction of the corvette, as well as the fact that the question regarding the composition of its weapons is still open, Ukrainians hoped to co-produce with the Russian enterprises an analogue of the anti-ship missile X-35, but the proposal did not interest the Russian side.

By the way, история The creation of the submarines of the 877 project began as early as the 70s of the last century, when the development of a new generation of diesel-electric submarines began, which were designed to conduct operations against submarines and surface ships, conduct reconnaissance operations and minefields. Under this project, the order was built 50 submarines, given the experimental and export options. As for the Alrosa boat itself, it was laid in May 1988 of the year at the Krasnoye Sormovo enterprise in Nizhny Novgorod. It was launched in the 1989 year, and got its name only in 2004 year in honor of the joint stock company that took patronage over it.

And, finally, cooperation in the field of the modernization of torpedoes SET-65, known as the “260 product”, is not excluded. A large number of them are in the warehouses of the Ukrainian Navy. The history of their creation began in the 1960 year, they are in service with the 1965 year.

It should be noted that Ukrainian enterprises also carry out repairs, upgrades and life extension systems and mine-torpedo devices weapons in the interests of the Russian fleet. In particular, we are talking about the enterprise of JSC Petrovsky KZA JSC, which for the period of 2012-2013 from Russian customers received about 80 percent of the total financing of contracts at the enterprise. This company has now finished exploring possible areas of modernization of the control systems for torpedoes SET-65, in particular, homing systems, gyro trim-roll sensors, the introduction of a shallow-water pressure sensor and outboard pressure switch from a deep-water sensor to a shallow-water sensor.

How successful the cooperation on these projects will be depends equally on both the Ukrainian and the Russian side. There is nothing wrong with the joint implementation of these projects, but there is a threat that this cooperation may once again become one of the main tools in the development of political relations between Ukraine and Russia ...

Ctrl Enter
Noticed a mistake Highlight text and press. Ctrl + Enter
We are
An-124 - the resumption of Ukrainian-Russian cooperation !?10 rating of the most significant supply programs and export contracts of Russia according to the 2011 results of the year in the BMT segment
96 comments
Information
Dear reader, to leave comments on the publication, you must to register.