What do young people know about the Great Patriotic War

6 May 2013
105
Modern youth confuses Zhukov with Suvorov, they stopped teaching in schools history, in the head of students of porridge from dates, gleaned on Wikipedia - such is the common opinion about the cultural level of graduates of schools and universities. Is it so? Have new generations really lost touch with their great-grandfathers and do not want to know the history of their country?


On the eve of another anniversary of Victory in World War II, PRAVMIR conducted a survey among students at four Moscow universities: the Financial University under the Government of the Russian Federation, the Moscow Road Transport Institute (STU), the Moscow State University named after MV Lomonosov and the Orthodox St. Tikhon University.

Has anyone in your family fought? Are there any awards? What did the relatives in the family say about the war?
Do you remember the dates of the beginning and end of the Second World War?
What are the main battles?
How would you describe Hitler's ideology? What motivated them, why did he start a war, why did people get exterminated? How would you characterize the Soviet Stalinist ideology of that period?
Do you know military poems and songs?
Your favorite movie or book about war?
Students were in a hurry for couples, they were afraid of the camera, they simply weren't ready to talk. He agreed to answer, well, if every tenth.

Those who responded, sometimes confused World War II and Great Patriotic War, did not name the USSR among the allies - the USA, and Germany - Japan, often could not remember poems and songs about the war, and sometimes even used the word "Entente". 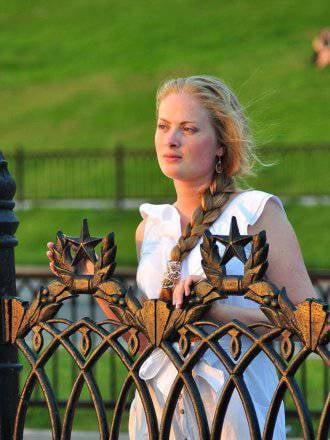 At this point, you can fall into a cultural and humanitarian depression and grieve about historical unconsciousness. But I will not.

... A student at the Financial University under the Government of the Russian Federation. On the blouse pinned St. George ribbon - is to congratulate the veterans. He reads an excerpt from "Vasily Terkin" on camera.

... Undergraduates MADI - in detail and thoughtfully talk about the ideology of fascism.

... A girl from Svyato-Tikhonovsky - shining with joy, speaks about military songs, comparing them with a prayer.

... Near the 1 of the MSU Humanities Corps, students discuss the last concert in honor of Victory Day. No, no, someone goes to the monument to the dead students and employees of Moscow State University who died during the war.

Economists, techies, theologians and humanists. We specifically chose four different universities, so that the students' answers turned out to be more diverse.

Something in which they coincided absolutely.

In their words and voices poorly concealed pride in the feats of great-grandfathers sounds. They are embarrassed if they cannot remember something: “What a horror! I forgot all the war songs "," Here is a shame! I don’t remember a single battle! ”,“ When did Germany invade Poland? Oh, how embarrassing! They are trying to analyze the fascist and Soviet ideology, compare, avoid unfounded estimates.

Today's student is watching “Only old people go to battle”, reads “And the Dawns Here are Quiet”, listens and sings “Katyusha”. Today's student goes to congratulate veterans. Today's student, to the question: “Did your relatives participate in the Great Patriotic War?” He raised his eyebrows in surprise and answered with an unlearned voice: “There is no family in our country that the war would not affect.”

Today's students are farther from the war, if only because their great-grandfathers and great-grandmothers who had fought talked about it, more often than not, for too long, but their grandparents did not find it.

But what can be called "historical unconsciousness", today's young people do not have.

Ctrl Enter
Noticed oshЫbku Highlight text and press. Ctrl + Enter
We are
What you didn't want to know about EnglandWhy Mikhail Lomonosov was sentenced to death?
105 comments
Information
Dear reader, to leave comments on the publication, you must to register.