The secret of the collapse of An-2: the pilot could become bad 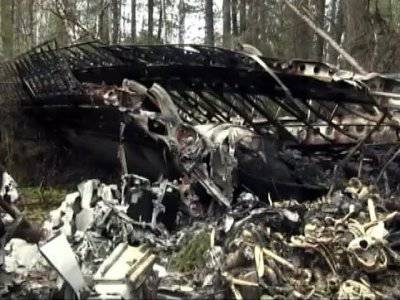 The An-2 passenger plane, which mysteriously disappeared a year ago in the Urals, crashed while landing. The aircraft and the remains of the victims of the tragedy found in the swamps.


The fact that dozens of search engines failed, quite accidentally happened with two hunters from Serov. In search of the grouse, they wandered into the swamps, where the locals do not risk going. You can go deep into the taiga only when the snow has already melted, but the swamps are still frostbitten. “We saw something similar to a fallen power line and, knowing that there could be an airplane, we decided to check it out,” said search engine Sergey Scriabin.

A terrible find from afar and really resembles a fallen power line pylon. An-2 literally sticks out of the ground, the screw, the engine and almost all the nose went into a viscous muck. It is impossible to immediately identify the "corncob" - neither the tail number, nor the name of the airline has been preserved on the skin. Inside are human remains, bones and skulls. Some are almost intact, others are badly burned.

The special correspondent of Izvestia, Yury Matsarsky, said that in the vicinity of the place of emergency there are scattered debris and parts of the aircraft, which went into the water on the dashboard so that neither the engine nor the screw could be seen. An-2 collapsed to the very center of the swamp. In winter, it is impossible to go there because of the huge and impassable drifts, and in the summer - it does not let the swamp. During the search on Saturday, one of the participants of the operation failed to the waist.

An-2 flew from Serov 11 June last year. Where the board was heading is unknown. There were versions that the passengers went fishing or even to the bathhouse in the neighboring area. The commander Hatip Kashapov never received permission to take off. A few minutes after being taken off the ground, the plane disappeared from the radar. In the 11 months, the missing corncob has turned into a real Flying Dutchman. His fragments several times seemed to be found, and then lost. Radio amateurs caught some signals, allegedly from An-2. Search engines combed the miles of taiga.
The version that An-2 fell in the area was one of the first. This area was combed by foot troops and checked from the air, but they could not find the car before.

Journalists have already dubbed this catastrophe "the secret death of An-2". Why did the propeller plane fall down almost vertically? When did the fire start on board: still in the air or after a collision with the ground? There are a lot of questions.

According to the pilot of the first class, Alexander Kovalev, who flew in the same car for quite a few hours, something extraordinary was to happen. Perhaps something happened to the pilot.

These questions must now be answered by investigators. The criminal case on the crash of An-2, which was suspended, resumed.

Ctrl Enter
Noticed a mistake Highlight text and press. Ctrl + Enter
We are
In search of a national idea: a project for choosing the main symbols of Russia
27 comments
Information
Dear reader, to leave comments on the publication, you must to register.