Syria has accused Israel of attacking a military science center 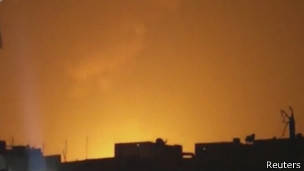 State television Syria said that Israel launched a missile attack on a military research center in the suburbs of Damascus. Israel has not yet commented on the incident.


Powerful explosions were heard on Sunday night in the area of ​​Mount Kasyun. An amateur video posted on the Internet captured a huge dome of fire in the night sky over the city.

The video claimed that the explosion occurred near the military complex in Jamaray, according to which Israel launched an air strike in January.

“Israel’s new attack is an attempt to raise the morale of terrorist groups that cannot recover from the attacks of our valiant army,” said Syrian television, referring to the recent offensive operations by Bashar Assad’s forces against the rebels.

If the messages are confirmed, Sunday shelling will be the third in a row since January. Israel has not yet commented on the incident.

"We do not respond to such reports," a representative of the Israeli armed forces told Reuters.

The two bombings over the course of two days indicate that Israel is gradually being drawn into the internal conflict in Syria, although according to official statements by the Israeli authorities, they tried with all their might to avoid such a turn of events. Especially if we are talking about obvious raids on military installations on the outskirts of Damascus.

In terms of political alignment, such attacks strengthen the position of the Syrian regime, both at the regional level and within the country itself. They are also putting the Syrian rebels in an unenviable position, in which case the role of minor players is prepared in a conspiracy dictated by the West, whose main goal is to undermine resistance to Israel.

As Israel stated, all that it cares for is to prevent the transfer of high-tech weapons to the hands of Hezbollah. If you look at the situation in the region with the eyes of an objective observer, Israel is hardly interested in the complete collapse of the regime in Syria, which could bring various rebel groups to power, including radical Islamist groups.

However, Israeli air strikes against targets in Syria for two days in a row say that the Israeli authorities will find it harder to achieve their stated goals, remaining just an outsider in the Syrian conflict.

Earlier it was reported that on Thursday or Friday, Israeli aircraft inflicted an airstrike on Syrian territory. Israeli authorities, on condition of anonymity, said that the goal was the party weaponsdestined for the Lebanese Shiite Hezbollah group.

Israel has repeatedly stated that it will take decisive measures if it receives information that Syria is transferring to the Lebanese militants weapons, including chemical ones. Israel is particularly concerned about the possibility of transferring such weapons to Hezbollah, the BBC correspondent in Jerusalem, Vira Davis, notes.

This week, Israeli Defense Minister Moshe Ya'alon admitted that Israel launched an air strike on a facility in Syria in January.

According to the minister, the transfer of high-tech weapons to radical armed groups such as Hezbollah is a “red line” for Israel, and when this line was passed, Israel had to act.

As a result of the January air strike, two employees of the center in Jamaray died, and the premises were seriously damaged.

Syrian troops and rebels have been fighting around Damascus for many months now, but neither side has succeeded.

According to the UN, over two years of conflict in Syria killed more than seventy thousand people.

The Syrian state national news agency SANA responded to the bombings with this quote: “The new Israeli aggression demonstrates the direct involvement of the Zionists in the conspiracy against Syria, as well as the connection of the armed terrorist groups with the hostile intrigues of Israel, which are supported by the West, as well as some states of the region and the countries of the Persian Gulf.

Iranian news agency Fars leads the Iranian Defense Minister Ahmad Vahidi’s reaction to the air strike on Friday: "Ruthless acts and adventurism of the Zionist entity will only strengthen the anti-Zionist sentiment in the region and reduce the life of this false regime."

One of the authors of the Israeli website Valla writes that strikes against Syrian targets seem to be dictated by "common sense." At the same time, he notes that the recognition of the very fact of the attacks by the Syrian official media and the radical Lebanese grouping should strengthen fears about the possibility of a retaliatory strike.