To win not by number, but by skill. Abramov Shetiel Semenovich 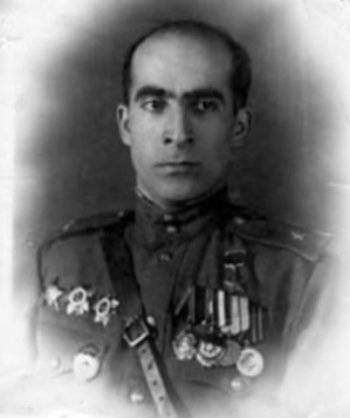 On the eve of 9, May I would like to tell about many millions of people who forged the Great Victory. I first learned about it from my grandfather, who fought under his command and remembered him with warmth.


A graduate of Makhachkala secondary school No. 1, a student of the Grozny Oil Institute, a Komsomol member. Shetiel Abramov voluntarily went to the front in June 1941 of the year. He graduated from the military infantry school.

... It was May May 1942. 242-Infantry Division led fierce battles with the enemy. In the spring flood, Seversky Donets spread its waters widely. The river was seething with tears of shells and mines. On the other side of it, on the left, the company of the infantry regiment needed to be replenished with forces and ammunition. To help came the platoon of Abramov. Under continuous shelling, a platoon crossed the river. Spun a chain. The commander led him lowlands, beams. On the way there was a field. Crawled on. But no matter how hard the fighters tried to go unnoticed to the rifle company, they did not succeed: the enemy found a recruitment suitable for the company. Shells began to tear along, bullets whistled overhead. But the enemy’s fire did not stop the warriors. They joined the company and immediately entered the battle. Abramov rose to his full height, rushed forward with the call: “Attack!” But then he fell down, thrown down. Blood was trickling from a bullet-pierced boot, but the commander continued to lead the battle until the forces left him. With difficulty he crawled away from the scene of the shelling. I was glad of one thing - the first combat mission was completed. After the hospital, he was transferred to another part, which defended Stalingrad from the north-west. The enemy rushed to the city. The division held back the onslaught of the invaders. Led and offensive battles to stop the enemy, do not give him to force the Don.

... In the large offensive battles of our troops, Lieutenant Abramov commanded a rifle company, which went on to break through the defenses of the enemy. Over 19 November 1942, the company passed 35 kilometers. Victory in the battles over the enemy is always joy. But on that memorable day, surrounded by a group of German troops near the village of Peskovatka, Abramov was wounded for the third time. The bullet pierced his right arm, smashing the bone. Once again, the hospital. After treatment, Abramov was enlisted as commander of the 9 th rifle company in the 246 th Guards Rifle Regiment of the 82 th Guards Rifle Division of the 8 th Guards Army. He was awarded the title - Senior Lieutenant. A great event happened in the life of the young Officer: he was accepted into the party. Shetiel Abramov also considers July 17 of the year as a memorable day of his frontline biography.

“Since morning dawn,” he recalls, “our artillery has launched a powerful fire on the defense of the Nazi troops, on the right bank of the Seversky Donets near the city of Izium. Shooting units crossed the river and stormed the first line of defense of the Germans. The path to the attackers was blocked by the height that dominates the terrain. Fighters called it "Chalk". Here the Germans had an observation point, from which both banks of the Seversky Donets River were clearly visible and for several kilometers - a steppe. The Germans turned the altitude into a strongly fortified strong point, built bunkers with rolls in several rows on it, created minefields, machine-gun nests, dug it in trenches, with message moves. Solid avalanche of fire prevented the advancement of our units. ” Rote Abramova, together with the 8-th company, was ordered to take the height. Rifle companies twice went to her assault. For the first time, Abramov’s machine-gunners caught on the bottom of the altitude, but the forces were unequal — they had to withdraw. Started a firefight. The Germans went to the counter. Two hours this fight lasted. Meter by meter guardsmen won the dominant height. A thick chalk curtain rose around. Dust blinded eyes, irritated the throat, stuffed into the muzzles of machine guns, and they refused to serve the soldiers. “Grenades for battle!” - then the command of Abramov was distributed. Three days were fighting for Cretaceous. When the shooting subsided, the explosions stopped, the chalk dust settled, the soldiers following Abramov's company saw a red flag at the height. For this feat the whole company of Abramov was awarded. The commander received his first award - the Order of the Red Star. In the battles for the height of the guard, Senior Lieutenant Abramov was again wounded. The command offered him a rest. But he asked permission to stay on the front lines.

His company took part in the liberation of Barvenkovo, Zaporozhye, liberated Odessa. In Zaporozhye, he was wounded for the fifth time. In April, 1944 was one of the first companies of Abramov who crossed the Southern Bug and approached the Dniester. All the ferries on the river the enemy kept under fire. 12 days in the water, wet to the bone, almost without food, exhausted by heavy multi-day offensive battles, fighters of the Abramov company kept the conquered bridgehead from here to ensure the deployed offensive of our troops. The task, according to the command, was solved perfectly. Shetiel Abramov, among other distinguished in battles, was awarded the Order of the Patriotic War, I degree.

In the offensive battles to break through the enemy’s defense on the Vistula River, the battalion again distinguished itself, in which the guards Captain Abramov was the deputy commander for combatant units, successfully crossed the river, captured a bridgehead on the west bank, and held it. For participating in the battles, he was awarded the Order of the Red Banner. In the battles for Warsaw, Abramov repeatedly led the battalion through minefields to break through long-term fortifications, skillfully organized a reflection of attacks tanks and self-propelled guns of the enemy, by personal example, raised fighters to attack. He deftly made his way to the front line of the enemy’s defense and bombarded the enemy with seemingly invulnerable dugouts.

Many obstacles were overcome by our soldiers on the way to victory: numerous reinforced concrete structures, steel caps, houses turned into pillboxes. “But the most difficult obstacle was, perhaps, the fortress city of Poznan,” said Shetiel Abramov. “He seemed to be impregnable.” The enemy built a multi-tiered engineering structure here. It had the shape of a polygon, on the tops of which there were firing points - forts and ravelins. The walls of the fortress were surrounded by a moat, the depth of which reached eight, and the width - ten meters. The bottom of the ditch littered with sheets of torn iron, barbed wire. The Nazis were sure that the infantry could not take the citadel, and the tanks could not get through here. Abramov's battalion was ordered to seize the first fort. February 19 1945, the assault units occupied the leading edge of the trenches, drove the enemy into the fortress, came close to the ditch. The battalion of Shetiel Abramov went to the first fort. On the night of February 20, the battalion launched an assault on the fortress: along the ladder the soldiers broke down to the bottom of the moat, using the same ladder tried to break into the fortress - once, twice, third. The enemy fired extremely dense fire. Lead-mowed soldiers fell, the attackers did not succeed in any sector. For two nights, the soldiers of Abramov stormed the fort, but all attempts remained unsuccessful. It was necessary to think of something. And Abramov decided: "It is necessary to storm the fortress during the day." He ordered the allocation of two assault groups of six each and a support group. Early in the morning, the sappers threw a moat with smoke bombs and grenades. The enemy brought heavy fire to the ditch. Bill of all kinds weapons. A firestorm raged over the moat. The battalion was silent, only occasionally smoke bombs flew into the ditch. This went on for two hours. The Nazis began to calm down, their fire weakened, and soon ceased altogether. At this time, at the command of Abramov, the assault groups, which had by then concentrated in the ditch, began to rise up the stairs in smoke into the fortress. One was caught, the second, the third soldier followed him: both groups broke into the enemy's disposition, the bayonets went into action. The enemy was stunned, but after a while, seeing that storming a handful, rushed to the counterattack. But storming, receiving help, pressed the enemy farther and farther. Abramov's battalion captured a significant springboard. By evening, in one of the embrasures of the first fort, a white flag appeared - the flag of surrender. Shetiel knew how insidious the fascists were. And the number of the garrison of the fort was unknown. A quarter of an hour later a German officer with two soldiers came out of the fort. Enemy truce said that the garrison of the fort numbering more than a hundred people surrenders. Abramov on the phone reported this to the regimental commander, asked to send machine gunners to take prisoners to the ditch. He couldn’t do this on his own: only fifteen men remained with the battalion commander in the line ... A few hours later, the remaining divisions of the division advanced into the fortress at the Abramov battalion site. And in the evening our artillery entered the fortress led by sappers across the moat bridge. On the morning of February 23, the soldiers of Abramov and other units, with strong artillery support, resumed the attacks. The enemy forts surrendered one by one. By two o'clock the citadel was completely cleared of the Nazis. 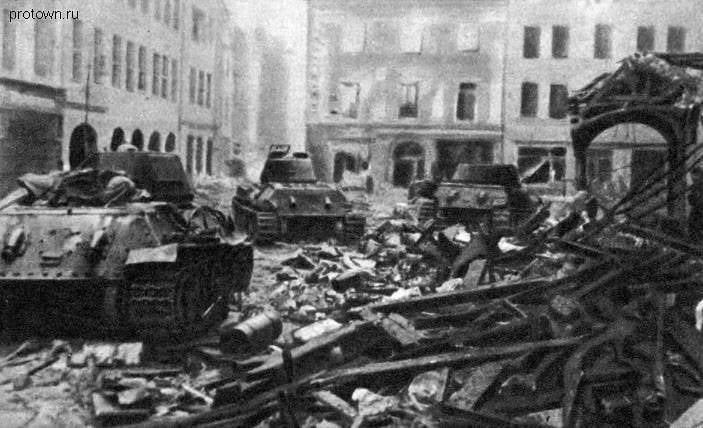 Here is what the commander of the 246 Guards Rifle Regiment, Hero of the Soviet Union, Major A. V Plyakin, wrote, introducing Shetiel Abramov to the title of Hero: an initiative officer. 7 February 1945, he was injured, but refused to leave the battlefield, continued to lead the battle. February 19 and fierce battles for the approaches to the Poznan Citadel, the battalion commander was killed. Abramov, without hesitating for a minute, assumed command of the battalion. The enemy was outnumbered by far superior to the Abramov battalion, but could not resist and was destroyed.

Storming the ramparts, the soldiers of Abramov, seeing their commander in the front ranks of the attackers, first broke into the rampart and, hoisting the Red flag on it, entrenched themselves. Developing the achieved success, guard Captain Abramov captured the grove with radio masts - the main stronghold of 3 and 4 ravels, using tanks that fought off the rifle units they supported and were located at the Abramov battalion. Abramov's battalion was the first to wedge in enemy defenses between 3 and 4 rales, and, preventing the enemy from coming to their senses, he quickly captured the rallion No. 4 from various sides, thereby cutting the group into two parts. Abramov, having broken into one pillbox, fell into a difficult situation. Six fascists attacked him. In a fierce battle, acting with a blade, a grenade, he destroyed five Nazis and one captured. In the course of these battles, Abramov’s battalion destroyed the Nazis to 400 and, over 1500, captured and captured large trophies. ”

After the war he returned to his institute, graduated from it. Soon, at the Leningrad Research Geological Institute, he defended his thesis on the topic: “Oil-bearing capacity of Mesozoic sediments of Northern Dagestan”. Until 1992, he worked at the Grozny Oil Institute, successively occupying the following positions: laboratory assistant, assistant, senior lecturer, associate professor, head of the department of general geology, dean of the geological exploration faculty. From 1993, he lived in Moscow, where 14 died on May 2004. He was buried at the Domodedovo cemetery in Moscow.