7 May 2013
6
Earlier, a series of articles on anti-tank guns was launched; PTR Boys, anti-tank guns Mauser T-Gewehr M1918 и Panzerbuchse 38. In continuation of these articles I would like to consider the models with which the Soviet Union was armed. And I propose to start with weapons, which was designed by one of the most famous designers Semen Vladimirovich Vladimirov.

In the middle of the 30-ies of the last century, work began on the creation of anti-tank guns, the designer Vladimir Vladimirov offered his projects. Realizing that the design of the weapon is only half the task and in many respects success will depend on what kind of ammunition will be used in the weapon, Vladimirov developed three samples at once, similar to each other, but in three calibers: 12,5, 14,5 and 20 millimeters. According to the test results, the 20 millimeter sample, despite its caliber, showed the worst results in armor-piercing, although hitting the target of such a bullet looked very impressive. In addition, the weapon under this ammunition had a weight of more than 40 kilogram, which made it difficult to transport. The sample caliber 12,7 millimeters did not impress anyone, because the characteristics of the ammunition did not allow to achieve the desired results, but the weapon chambered for 14,5 millimeters showed the best performance, although it had many problems. The main problem of the proposed sample was the very low survivability of the barrel, all 150-200 shots, in addition to the weight of the sample, its dimensions were far from ideal. 22,3 kilograms, the total length of more than 2 meters did not mean that you could quickly change position with a weapon, and it was just that wearing such a fool of pleasure. Taking into account the fact that, according to its armor-piercing characteristics, the cartridge satisfied the commission, and the weapon itself was fairly trouble-free in operation, the weak point was only the barrel, Vladimirov's anti-tank gun for cartridges of 14,5 caliber of millimeters was sent for further refinement. 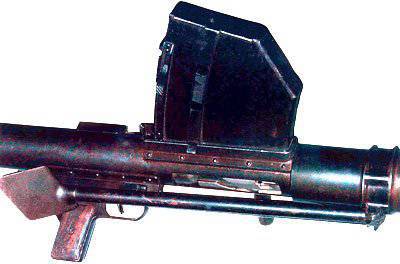 By itself, the sample developed by Vladimirov had several rather interesting solutions at once, but first we will get to know how it all worked. The basis for the self-loading anti-tank gun was automatics with a long barrel stroke, when locking the barrel bore by turning the bolt. When fired, the powder gases expand and not only push the bullet forward along the barrel, but also tend to push the cartridge case out of the chamber. Since the sleeves are securely fixed in the chamber by a bolt that is connected to the barrel, it is impossible to do this for powder gases, but the barrel and the bolt of the weapon are set in motion. Moving at a much lower speed than the speed of the bullet, because of its mass, the barrel and bolt move back. When moving, the bolt turns and opens the barrel bore, but at the same time there is no separation from the barrel of the weapon before they reach the extreme rear point. At the end of its backward movement, the bolt stops on the sear, and the barrel of the weapon begins to move forward under the action of its own return spring. When this occurs, the extraction of spent cartridges, which is thrown down. Having reached its normal position, the barrel stops, and after pressing the trigger, the shutter of the weapon begins to move, which pulls out a new cartridge from the weapon shop, sends it to the chamber, locks the barrel when turning and breaks the cartridge capsule in the final, which leads to a shot . 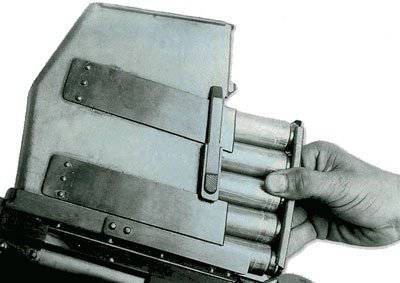 The advantage of such an automation system was that the weapon without any additional devices began to have quite tolerable returns when shooting. The heavy weight of the moving parts did not allow them to develop greater speed when moving, and part of the energy received from the powder gases was extinguished by a rather rigid barrel return spring, however, the recoil from the anti-tank rifle still remained quite noticeable. The main drawback in this case can be called what is inherent in all systems with a moving barrel - reduced accuracy of weapons in comparison with systems with a fixed barrel. And although this is not about a sniper rifle at all, but about an anti-tank rifle, this can be considered a significant minus, since it was not just necessary to get to tank, and get into the most vulnerable place, which would lead to at least a partial loss of performance of individual components of the tank. Such a task requires the maximum concentration and experience of calculating an anti-tank rifle in a real battle, which is a rather rare phenomenon, so that subject to mass and fast production, qualities such as very high accuracy can be sacrificed. In addition, the ammunition itself was effective at very short distances, which, on the other hand, eliminates the need to make a high-precision large-caliber sniper rifle out of the PTR. Nevertheless, everyone understood how important it was to precisely hit the target, for this reason the weapon had an optical sight, albeit the simplest.

One of the most original solutions in Vladimirov’s anti-tank rifle, in my opinion, was a weapon shop. The store itself was located on top, at an angle, so as not to interfere with the use of sights. At the same time the shop was fixed, with a capacity of five rounds. To charge the weapon, it was necessary to compress the spring of the magazine feeder and insert a clip with cartridges through its back wall, which, being fixed, closed the magazine from dirt and other unpleasant moments of the weapon being in field conditions. As soon as the last cartridge was in the chamber, the holder was thrown away, and a new one could be put in its place, while the return spring was pre-compressed. For what it was all so perverted. First of all, a fixed shop provides a more reliable supply of ammunition, while detachable shops could bend or pollute during transportation. Just do not forget about such a moment that the five rounds in the holder is much easier than the five rounds in the store, and the gear holder faster than the store equipment. Although not everything is so smooth with the clips, we will not spoil the big picture.

In the process of finalizing weapons, Vladimirov did not abandon the general principle of operation of the PTR and, at the same time, solved the problems that were identified during the testing of weapons. In particular, the resource of the anti-tank rifle was able to increase to 600 shots, although how remains unknown. With the weight and dimensions of the weapon, the designer acted much easier. Since the reduction of weight and dimensions was simply impossible with the used ammunition without reducing the characteristics of the weapon and ease of use, the designer made the weapon quick-dismountable into two parts. Thus, the calculation of the anti-tank gun could carry two pieces of weapons and ammunition without any special problems over fairly long distances on their own.
Unfortunately, despite the rather interesting decisions and the efforts that were used by the designer to bring the weapon to acceptable performance, Vladimirov’s anti-tank gun remained only as a prototype. The winner of this struggle was the work of Rukavishnikov, but this sample is already in another article.

Ctrl Enter
Noticed a mistake Highlight text and press. Ctrl + Enter
We are
The first anti-tank gun Mauser T-Gewehr M1918Domestic anti-tank guns
6 comments
Information
Dear reader, to leave comments on the publication, you must to register.