5 May 2013
70
By the decision of the Minister of Defense of Russia, Tamanskaya and Kantemirovskaya, previously disbanded, were recreated tank division, the press service and information department of the Ministry of Defense reported on Saturday. 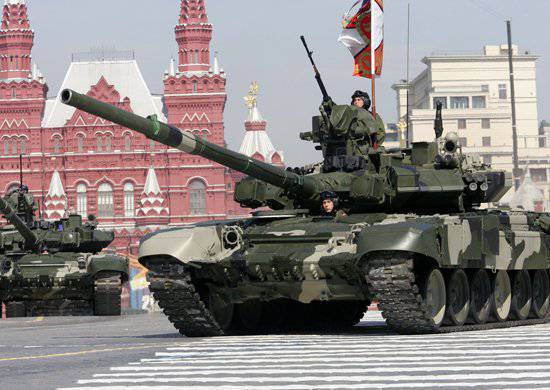 “The basis for their formation was, respectively, the 5th separate motorized rifle and 4th separate tank brigade, which will include a number of other military units. Divisions returned to them historical names, and parade formations of compounds will take part in the upcoming Victory Day parade on Red Square already under new combat banners, ”the message posted on the agency’s website says.

At present, the personnel of these compounds are actively engaged in receiving new types of weapons and military equipment arriving in their armaments, the ministry said.

The Taman Division was formed in July 1940. In the Great Patriotic War, she participated in the famous Smolensk battle of the year 1941. Then she took part in the Oryol-Bryansk defensive operation, defensive battles under Kursk and Tim in the battle for the Caucasus, the Novorossiysk-Taman, the Kerch-Eltigens airborne, the Crimean, Belorussian, Baltic and East Prussian operations. The combat path of the division completed 17 on April 1945 of the year on the Zemland Peninsula.

In 1999, units of the division participated in the counter-terrorist operation in the Chechen Republic as part of the United group of federal forces in the North Caucasus.

In the course of military reform in May 2009, the division was reorganized into the 5 th motorized rifle brigade of the Moscow Military District.

The Kantemirov Division was formed in June 1942 of the year in Stalingrad. The first baptism of fire received during the liberation of the village of Kantemirovka, in honor of which it received its name, participated in the battles in the Middle Don region, in the Belgorod-Kharkov direction of the Kursk Arc, in the liberation of a number of cities in right-bank Ukraine. Its units were among the first to reach the Elbe, took part in the capture of Dresden, made a swift raid into Czechoslovakia, and ended their combat path on the outskirts of Prague.

The military personnel of the compound took part in peacekeeping operations in South Ossetia, in Kosovo, in the counter-terrorist operation in the Chechen Republic.

In the course of the military reform, 2008 — 2009 was reorganized into the 4-th Separate Tank Brigade.

As specified in the Ministry of Defense, in the framework of the implementation of the instructions of the President of Russia, contained in the annual message to the Federal Assembly, the military department is currently working on the revival of names and other most famous regiments, military units, formations of previous eras, specified in the ministry.

Recall that in December last year, Russian President Vladimir Putin announced that Russia needed to revive the names of famous regiments of the past, including Preobrazhensky and Semenovsky, and requested the Minister of Defense to submit relevant proposals.

At the end of March, the Ministry of Defense reported on the decision taken to give the two military units the honorary names of famous regiments of the past. "In the Russian army, two military units - the 154-th separate commandant regiment and the 130-th separate motorized rifle brigade - will be assigned honorary names - Preobrazhensky and Semenovsky regiments, respectively," the military department said.

Ctrl Enter
Noticed oshЫbku Highlight text and press. Ctrl + Enter
We are
Why scare us with a tank army?Veterans of the Victory Parade: we saw the military power of Russia
Military Reviewin Yandex News
Military Reviewin Google News
70 comments
Information
Dear reader, to leave comments on the publication, you must to register.