8 May 2013
17
Fundamentally new model of anti-personnel / anti-vehicle guided mine. Due to the fact that this mine is not in service with the Russian Army, its name is given according to the factory nomenclature.


At its core, this is both an anti-personnel and anti-vehicle guided mine. This is largely anti-tank mine, because the defeat by a cumulative blast jet is applied to the roof of the car, and the armor penetration rate is 30mm.

The use of mines is advisable for group targets (infantry coming with the support of armored vehicles, artillery units on the march and when deployed in positions, infantry columns and vehicles on the march, in places of halts).

The mine is set manually with the use of mechanization under the ground to a depth of 60, see the mine cover. The mines are controlled by the operator from the wired control panel PU-404P or the radio control PU-404Р. One remote control can operate up to 100 min. The control range of the radio remote control is up to 10 km, wired to 4 km. 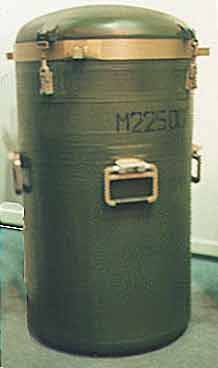 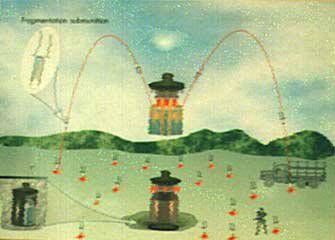 The control panel processes the incoming signals and issues recommendations to the operator about the advisability of mines, which mines from the combat duty watch should be exploded, how many and which mines that are in the passive mode, it is advisable to transfer to the combat duty mode. If the targets are at the same time in the affected areas of several mines, then recommendations are issued on which of the mines to be optimally exploded.

When issuing a command from the control panel to an explosion, first the trigger is triggered, dropping the cover of the mine and the masking layer of the soil. Then the rocket engine of the cluster warhead is launched, which takes off to the height of 45-60 meters. Upon reaching this height, the cassette scatters striking elements in the 85-95 radius of meters, which are in the 40 cassette.

The picture on the left of the cluster warhead in the section. In the upper part, a block of target sensors is highlighted in red, striking elements are visible inside, one of which lies near the cassette, in the upper part the nozzles of the cassette rocket engine are clearly visible. 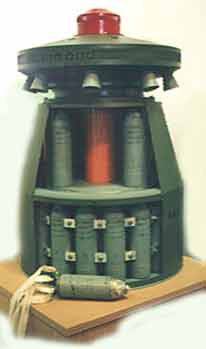 Striking elements have the form of metal cylinders. The length of the element is 16cm, the diameter of 6.5 cm. In the tail section there are four fabric stabilizing tapes, which ensure that the striking element is dropped head down. When the fuse touches the surface of the earth or the car an explosion occurs. Damage to people is inflicted by shrapnel from the damaging element (17 damage radius). Damage to cars is applied in a cumulative jet, since The front part of the warhead has a cumulative funnel with penetration up to 30 mm. armor. The plant may customize the nature of the damaging elements. By thinning the hull and increasing the depth of the funnel, armor penetration can be increased to 60-80 mm., And if the cumulative funnel is removed and the attack element is filled with a large amount of explosives placed on the walls of steel balls, then the radius of damage to people can be brought to 20-30 meters.

Tactical and technical characteristics of mines:

The mine is transferred to the modes of combat duty or passive waiting from the control panel. From him the command is issued for self-destruction immediately or after the expiration of the established period of combat work. When attempting to remove a mine, if the integrity of the wired control line is violated or the radio line interferes, the console informs the operator that the mine cannot be controlled. At the same time, depending on the preliminary settings, the mine can go into safe mode or self-destruct. Lack of communication with the control panel for a predetermined period of time leads to self-destruction of the mine.

It is possible to equip mines with devices that suppress the work of metal detectors (mine detectors), radio frequency mine detectors, and odorant mine detectors. It is possible to produce a simplified version of a mine without target sensors. In this case, the operator observes the battlefield and visually determines the presence of targets in the affected area, and then issues a command to blow up the mines. The cost of the simplified version is three times lower.

To install mines on the ground, the plant has developed a mine installer, which is a ZIL-131 or KAMAZ-4310 vehicle. Possible conversion to the miner installer of any other truck or tracked vehicle. The installer houses drilling equipment that allows drilling wells for mines in soils of categories I-IV, crane equipment for setting mines and equipment for testing mines, as well as a wired remote control and radio control. The installer ZIL-131 carries up to 12 min.

Although in essence this ammunition is an anti-personnel / anti-vehicle mine, it does not fall under the jurisdiction of either the Ottawa Convention (see the article “Ottawa Convention”) or the Protocol of the Second Geneva Convention, since firstly, it is not called "mine", but "engineering ammunition", secondly, in the Ottawa Convention is specified in Art.2: "1." Anti-personnel mine "means a mine that is intended to explode from the presence, proximity or direct impact a person and at the same time incapacitates, cripples or kills one or several people.Mines intended for detonation from the presence, proximity or direct impact of a moving vehicle, not a person, and equipped with an element of non-recoverability cannot be classified as and anti-personnel mines only on the grounds that they are so equipped. 2. “Mina” means ammunition intended to be installed underground, on the ground or near the surface of the ground or other surface and to explode from the presence, proximity or direct impact of a person or vehicle. ., but this mine does not explode from presence, or from proximity, or from direct impact, but explodes from the operator’s command, i.e. it can be considered an artillery gun. 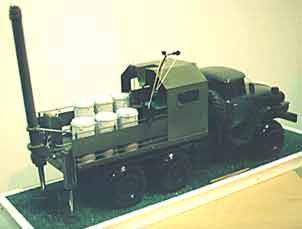 Here the military, technical and legal illiteracy of those who composed the text of the Ottawa Convention is very clearly traced. After all, a mine, unprecedented in its destructive possibilities, has been created, and no convention concerns it. And this is just the beginning.

By the way, this mine is very easy and simple to make uncontrollable, i.e. abandon the control panel, the operator. It is enough to attach the “Hunting” anti-personnel mine control unit to it or even the simplest fuse MUV with tension wire, and have a bite to eat a couple of wires in the sensor unit. And any sapper sergeant can handle it.

Ctrl Enter
Noticed a mistake Highlight text and press. Ctrl + Enter
We are
Perspective anti-personnel mine POM-3 "Medallion"PMD-7 anti-personnel mine
17 comments
Information
Dear reader, to leave comments on the publication, you must to register.