6 May 2013
184
As is known, in late April, an extended Japanese delegation headed by Prime Minister of the Land of the Rising Sun, Shinzo Abe, visited Russia. For more than ten years, the official Japanese authorities, let's say, did not please us with their visits, and this was perceived by a certain circle of people almost as a Russian diplomatic failure. They say that it was necessary to bring the relationship with a neighbor to such a state that the delegations from Tokyo did not want to fly for 10 years to us. And we, the Russians, from such words, apparently, had to beat our heads against the wall and sprinkle ashes on the same head, cursing ourselves for the “great Russian-Japanese friendship” experiencing difficult times. And in the intervals between the sprinkling of the head and the blows of vertically standing concrete structures with it, most likely, they had to think about how to cajole the Japanese partners so that their friendship towards us began to shine and sparkle. 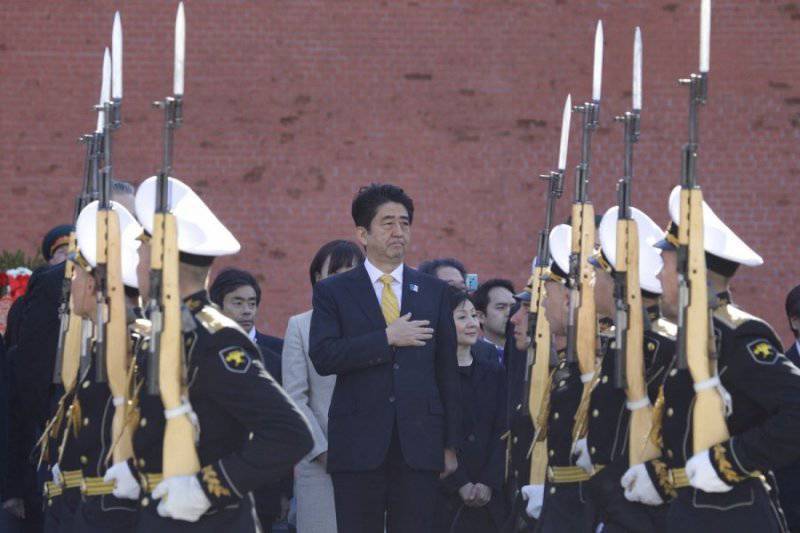 But the majority of Russian residents did not even think about it. And the long absence of official visits to our country by the Japanese delegations for the overwhelming majority of Russians stood and rode, like, in principle, the Japanese delegates themselves. But Mr. Abe was unable to put up with this state of affairs, who in the territory of Japan itself is determined to be the leader of the right-wing movement. And the status of a right-wing politician, by definition, forces him to move and demonstrate his desire to raise the level of national identity in the Japanese islands. The right political status of Shinzo Abe is like crumbs in bed: they just won't give you peace. So Mr. Abe decided to demonstrate to his people that he is the politician who is not afraid to speak to Russia in a hard language, raising the question of the need to conclude a peace treaty. I gathered my delegation, handed to the journalists accompanying it, leaflets with the necessary questions, plunged into the plane and went to talk to talk with the Russian president.

The visit itself was presented as mainly economic: a reduction in gas prices, the construction of an LNG complex in Japan, an increase in commodity turnover; but everyone understood that behind the economic screen lies the main question. This question is about what will happen with the four islands of the South Kuriles, because of the territorial affiliation of which the peace treaty between Russia (at one time the USSR) and Japan no longer exists for 67 years. And this question, I must admit, made a lot of noise both in Russia and in the country where Shinzo Abe came to us with his retinue.

Vladimir Putin's words about the need to resume negotiations on a peace treaty between Japan and Russia, caused a heated debate in society and in the press. Persons for whom the word “Putin” itself is the most irritating factor in their lives immediately declared that the Russian president “wants to surrender” the Kurils to the Japanese, presenting them to Tokyo on a silver platter. Like, if Vladimir Putin mentioned the need to return to the Kuril negotiation process, it means that you don’t go to a fortune teller, he will give the island to “Japanese” partners ... Someone remembered the term “hikivak” (a draw in judo) that was once used by Putin, who expressed position on the islands, to which you want to strive. Political analysts immediately counted that in this case the hikivake could mean the following: if four islands demand, then Putin allegedly would give two ... The position is certainly entertaining, but why not assume such an option as the same hikivake: Japan transfers Hokkaido to Russia or Okinawa, and Russia is still making concessions and giving it the Southern Kuriles. What is no outcome? .. Concessions should be mutual and equal. Peace treaty, as in any way.

Speaking of Okinawa. Russian political scientist and philosopher Alexander Dugin also attended to a visit of the delegation in Russia and said that it would be better if Putin did give the Japanese four South Kuril islands to the Japanese, instead demanding that the Japanese withdraw the Americans from the Okinawa base. Allegedly, after that, the Americans will lose their influence on Tokyo, and Russian-Japanese relations will certainly normalize, because, in Dugin's opinion, the Japanese without a US military base on their territory are entirely peace-loving people who are prone to good-neighborly relations. They say that if they show military aggression, then it is strictly against their will. That, you understand, Hitlerite Germany was pushing them, but now the Americans are going astray. And they themselves are so innocent and prone to good-neighborliness, what about it except that songs need to be composed ...

The opinion is, of course, not without interest, but why did political scientist Dugin believe that a certain hypothetical withdrawal of American troops from the base in Okinawa is essentially equivalent to the transfer of Japan to the South Kuriles from Russia? What connection can there be between the transfer of lands transferred to Russia as a result of the Second World War and the withdrawal of a certain military contingent on the territory of a foreign state? Yes, under such a bench you can give a good half of the territory of Russia to everyone, demanding, for example, that NATO troops leave the Vistula, and the ODIHR recognizes the elections in Russia as democratic. The exchange ... You can’t say anything ... paraphrasing the words of a famous sports commentator, you can say: we don’t need this exchange. Let us deal with our Okinawa ourselves, and we ourselves will also deal with our Kuriles. 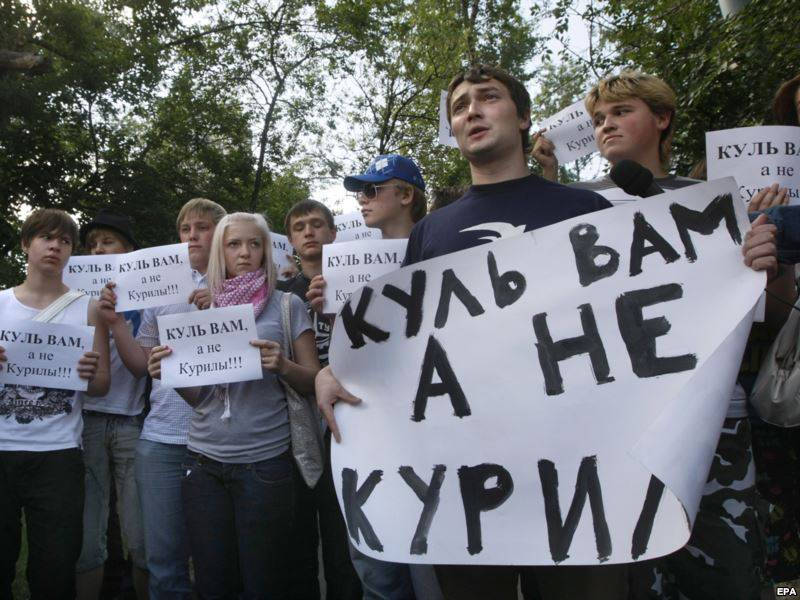 Apparently, such proposals as “it is necessary to transfer the islands of Japan” and “predictions” in the style of “Putin will give the Kurils of Tokyo” will continue until the end of this issue in Russia itself. And to put this point is very easy. If we position ourselves as a democratic power, then this status needs to be once met. And the main expression of democracy is always and everywhere a plebiscite. In other words, the point in disputes over the status of the South Kuriles, and, consequently, about the peace treaty with the Land of the Rising Sun, is a referendum in Russia. Whether this option is like Japan or not - we should not be interested at all.

The question in the bulletin should be clear and unambiguous, as well as the presentation of the results of this referendum. Now, after the Russians expressed their point of view on whether they want the South Kuril Islands to remain in the Russian Federation or not, and there should be a dialogue on a peace treaty with Japan. If the majority suddenly expresses the opinion that Shikotan, Kunashir, Habomai and Iturup are better to be handed over to “fraternal” Japan (which is unlikely), then the Japanese will be handed the cards. And since the Russian people (as it should be noted, the main source of democracy in the country) draws figs to Japan, then the same President Putin will have a far better opportunity for a productive conversation with Japanese partners: they say, the people decided, and I only the president, elected by this very people - nothing, you know, I can't help it, I have a duty to fulfill the will of the majority of Russians. So let someone then decide to accuse Russia of being undemocratic. Of course, there will be any, but the number of them can be seen from the results of the same referendum ...

Ctrl Enter
Noticed a mistake Highlight text and press. Ctrl + Enter
We are
Eastern turn: what is he carrying to us?Japanese Shinzo Abe decided to make friends with Korean Kim Jong-un
184 comments
Information
Dear reader, to leave comments on the publication, you must to register.