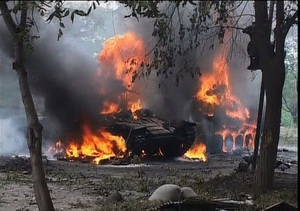 On the night of 8 August 2008, the Georgian army entered the territory of South Ossetia and partially destroyed its capital, the city of Tskhinval. The Russian Federation, protecting the residents of South Ossetia, most of them have Russian citizenship, brought its troops into the region and, during the 5 days of the fighting, ousted the Georgians from the conflict zone. Later in late August, Russia recognized the independence of Abkhazia and South Ossetia, in response to this, Georgia named these two republics as occupied territories. Let's see what the losses in people and technology suffered by the parties during this fleeting conflict.

According to the Center for Analysis of Strategy and Technology during the conflict, the Russian army lost 67 people dead. It is this figure that the Investigation Committee at the Prosecutor’s Office of the Russian Federation called, analyzing the past hostilities. This figure includes the dead and after a period of active hostilities, that is, until the withdrawal of troops. The situation is somewhat lubricated by the fact that neither the UPC nor the Ministry of Defense of the Russian Federation published the official list by name of the dead servicemen, which causes some confusion in this question and the appearance of different numbers of victims in the interval from 48 to 74.

Of the 67 dead soldiers, 48 people died directly from the enemy’s fire, the rest of the 19 were victims of road accidents, “friendly fire” and careless handling of weapons. They attributed CAST to the “non-combat losses” of the Russian army in this conflict. Particularly great was the role of the accident, they accounted for 9 dead. Such high losses are due to the objective difficulty of transferring a large group of troops carried out at high speed along a narrow mountain serpentine, in some cases at night. So from 30 injured 429 of the motorized rifle regiment, only two were injured from enemy fire, the rest were injured on the march (severe bruises, fractures, head injuries). Of the 9 injured 292-th mixed artillery regiment 8 were injured in an accident. At the same time, the motorized rifle regiments, well prepared for action in the highlands of 70, 71, 135 and 693, took the position without incurring significant non-combat losses. The total number of wounded as a result of the conflict soldiers of the Russian army ranges from 170 to 340 people, it is difficult to determine them more accurately.

According to the head of the Center for the Unification of Russia-Ruslan Pukhov, in contrast to us, the Georgian Defense Ministry published a surname list of the dead and missing in less than a month after the conflict. Subsequently, it was regularly updated and clarified, as the fate of the missing people was found out and the identification of the remains went on. This list in addition to the names and surnames contains military ranks and belonging to military units. According to the director of CAST, the data presented in it are quite complete and accurate. 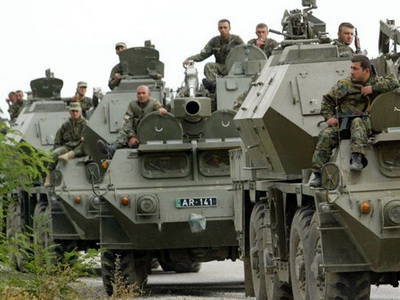 The Georgian military during the conflict lost 170 people killed and missing, and 14 Georgian policemen were also killed. The number of wounded reached 1964 people, including reservists and police. Such a large ratio of the wounded to the dead more than 10 to 1 is due to the widespread use of modern protective equipment (helmets, body armor) in the Georgian army. Most of the wounded received shrapnel wounds from the actions of the Russian aviation and artillery fire. Under these conditions, personal protective equipment proved to be quite effective. According to the information of the Georgians, the sanitary evacuation services worked well, and in the immediate vicinity of the conflict zone there were stationary well-trained hospitals and hospitals, which allowed to reduce the mortality rate among the delivered wounded to 2%.

The most comprehensive list of Russian equipment losses is also provided by the Center for Analysis of Strategies and Technologies. From August 8 to 12, our units in South Ossetia lost 3 tank, up to 20 light armored vehicles and 6 aircraft, these data are based on the study of photos and videos of materials from the conflict zone, media materials, memories of combatants.

So during the conflict, Russia lost three tanks: T72B (M), T-72B and one T-62. All of them were destroyed by enemy fire. Lightweight tracked and wheeled armored vehicles suffered more tangible losses - around 20 units. Among them, nine BMP-1, three BMP-2, two BTR-80, one BMD-2, three BRDM-2 and one tractor MT-LB6. Artillery, MLRS and air defense systems were not lost. 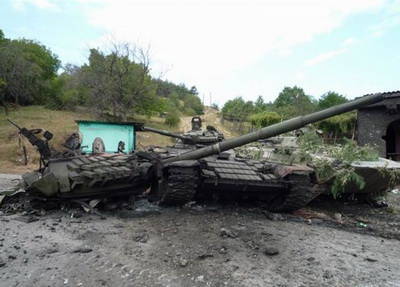 There were high losses in the vehicles. Only in the camp of the peacekeepers as a result of the shelling and the fire of the tanks, all the equipment located there was destroyed, which is about 20 units. The 10 trucks of the GAZ-66 mortar batteries of the 693 and 135 regiments were destroyed by enemy artillery fire. Two Ural-4320 trucks were destroyed on August 11 during the daytime as a result of the attack of the Georgian Mi-24 helicopter. A number of other trucks were lost as a result of serious accidents.

During the fighting, three Su-25 were lost, two Su-24 and one Tu-22М3, after the conflict ended, two Mi-24 and Mi-8 MTKO helicopters crashed as a result of the accident. Of these 2 planes were reliably shot down by enemy air defenses, 3 became victims of “friendly fire”, and it was not possible to determine who shot down the last one. In addition, another 4 Russian attack aircraft Su-25 received serious damage, but could return to the base.

During the active phase of the fighting, the combat fleet of Georgia was completely destroyed, the losses were 2 missile boats, 5 patrol boats and a number of smaller ships. Aviation lost three An-2 transport vehicles, three Mi-24 helicopters and one Mi-14 helicopter, while the Mi-24 helicopters were occasionally used by the Georgian army until the very end of the conflict. Georgia has not lost a single combat or training aircraft, and this has its explanation. Georgian aviation appeared above the battlefield only once in the morning of August 8, after that the planes did not rise into the air and were dispersed and disguised at the airfields.

In the battles, 15 destroyed Georgian tanks, another 20 was burned after the capture at the place of hostilities, the Russian army kept the 30 tanks as trophies, most of the T-72. In addition to the tanks, the Georgians lost four BMP-2, four Turkish-made Cobra armored vehicles and three BTR-80. As trophies, Russia captured fifteen BMP-1 and two BMP-2. Georgian artillery lost four self-propelled 203 mm. howitzers "Peony" and two "Dana" of Czech production. One “Peony”, two “Dans” and around 20 non-self-propelled guns of various calibers were captured by the Russian army as trophies.