How a simple village grandfather taught the mind to the mind ... 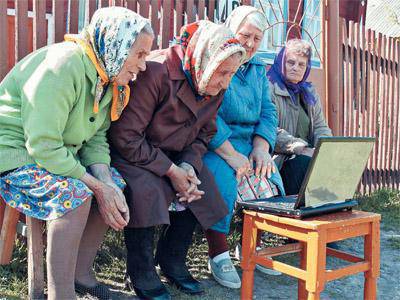 Here I listen to you, urban, and amazed. This is how much to learn to know so much? And the words are tricky to say and swear somehow somehow, but there is no concept of life. As in the bank, where my grandmother cucumbers salt. You live not only behind the glass, but also in the cellar. You say that life will improve, there will be some reforms there, something else. And how will it improve? In order for the owner to be on the ground, at the plant, here on this lake. Not the owner, from whom you bought vouchers for hunting, but the one who also takes care of the ducks, will disperse the raven so that the nests will not drown, will bring fodder if necessary.


Here before the collective farm was the chairman. Boss, I will tell you. Climbed into all holes, into every nook and cranny. Who has a wedding there or a birth is planned, who, God forbid. Commemoration. He knew everything and remembered everything. Just ran to the chairman-solve the question. And decided. Therefore honor and respect were to him. First place at any table.

And now what? Like, the farmer should be instead of the chairman. What is he? And the reaper, and the Swiss, and the dude igrets ... Everything, like, in the case, but to no avail. We take loans all the time. Why take? - Yes, because somehow it turned out, we do not earn for feed.

Or here are the choices. Previously, elections in the village were a holiday. In the morning everyone gathered, music played in school, the men at the table already in the 6 hours ranked whom they would choose. And everyone knew it would be necessary, the deputy will accept and if he can, he will help. And now you know who your deputies are? Here we still know our village, and then ... We don’t even know the names. And then these same deputies of their own and the bosses will be convicted. And you look, everything, sort of like, friends, girlfriends. Some mean laws are passed, others are executed, and no one is responsible for anything.

The main thing is that people complain about the head of our settlement (ugh, what the village was turned into), and the deputies again approve it. Because a friend and comrade. And I will tell you, men, there will be no order among us until there is no owner, and while some friends pull the deputies behind the ears of others ...

This is about a monologue I heard. And I thought, and after all, Dedok is right. With his peasant mind, he reached what we could not yet reach. He simply, with a swearing word (of course, I can’t literally copy a speech) explained to us what and how. The troubles of our country are immensely embedded in the electoral system. After all, we really do not know our deputies. Moreover, we laugh when we read in which districts our actors, players, and others were elected ... Whom they represent in the State Duma. We vote for one candidate, but a completely unfamiliar person turns out to be in the State Duma ... According to the party list. And this person has already been obliged by his deputy status not to us, the voters, but to his party boss. And he wanted to spit on us. The main thing to please the faction, the main thing is to be at the top of the list, the main thing is to be with the ministerial salary in Moscow.

Maybe that's why they removed the voter turnout threshold, because they understood the presence of such grandfathers in Russian villages and cities. How much has come, so much is good. You can not vote against all. To spoil the bulletin? - Yes please.

The people are not going to the polls, and the bureaucratic and deputy caste, periodically changing places, lives in clover. So, we need to change the electoral system, remove the caste-bureaucracy and nepotism (this is how it can be during the election of normal) deputies. We need to deploy the servants of the people facing the people. Enough already to look at the asses of permanent meetings. We are not sheep, we are a people who want to respect themselves and their state. We now have a strange division-the state is disgusting, and the Great Motherland ...

Ctrl Enter
Noticed oshЫbku Highlight text and press. Ctrl + Enter
We are
About Stalin and KhrushchevWhat you didn't want to know about England
Military Reviewin Yandex News
Military Reviewin Google News
91 comment
Information
Dear reader, to leave comments on the publication, you must to register.