Russia's nuclear sword in the 21 century 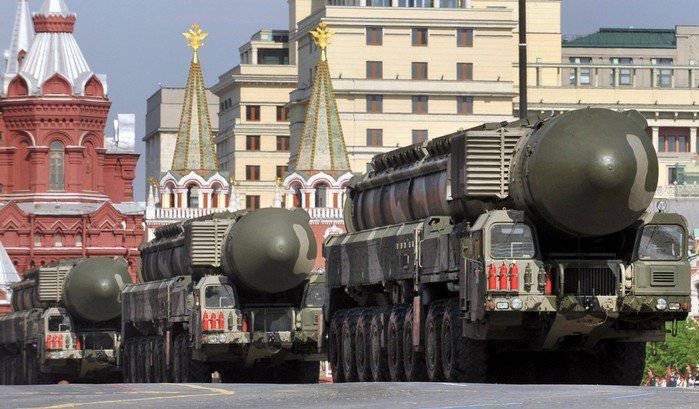 The basis of the strategic nuclear forces of Russia in the future up to 2045-2050. the Topol-M, Yars, and Bulava complexes will be developed by the Moscow Institute of Heating Engineering and their further modifications. Due to the fact that in recent years there has been a lot of speculation in the media about the combat capabilities of these complexes, as well as the adequacy or inadequacy of replacing the old rocket systems with them, I would like to get a little closer understanding of some technical aspects of the case. I am not a rocket specialist. My article is based on information from open sources and on the fact that Yury Solomonov, the general designer of these systems, and also some officials of the Ministry of Defense spoke about this at various times.

The Yars and Bulava complexes belong to the new, fifth generation of strategic missile systems. The Yars complex with a PC-24 solid-fuel three-stage rocket was commissioned in 2009 and is a further development of the Topol-M complex. Compared to Topol-M, up to 50% of new elements are used in the Yars design. The missile is equipped with a separable warhead with the number of warheads, judging by photos from the Votkinsk plant, to 9-ti. The maximum range of the PC-24 is 10000-11000 km. Drop weight 1200-1500 kg. Thanks to the use of new fuel mixtures, the rocket has a much higher speed compared to the complexes of the previous generation. This allows it to gain altitude much faster before the enemy’s space reconnaissance satellites detect the start. The complex of means for overcoming the missile defense system of the RS-24 rocket includes false targets and other technical means. There is no more accurate data about it. There is evidence of means for overcoming missile defense systems of the Topol-M missile system. In particular, spurious targets are indistinguishable from warheads in all electromagnetic radiation ranges (optical, laser, infrared, radar), allow to simulate the characteristics of warheads in almost all selective features on the extra-atmospheric, transitional and significant part of the atmospheric section of the descending branch of the trajectory of the missile warheads are resistant to the damaging factors of a nuclear explosion and to the radiation of a super-power nuclear-pumped laser, etc. For the first time, false targets have been designed, capable of e resist radar with superresolution. The means of distorting the characteristics of the head part consist of radio-absorbing (combined with heat-shielding) coating of the MS, generators of active radio interference, aerosols-sources of infrared radiation, etc. The PCB PRO is designed to significantly increase the time required for a prospective enemy's probable enemy to detect warheads among a variety of false targets and interference, thus significantly reducing the likelihood of warhead interception. Probably, the complex of means for overcoming the PC-24 ABM system is even more perfect. Yury Solomonov said that on the Yars every combat unit has an individual guidance system, and its flight path is constantly changing. And the American “Patriots” and their European counterparts cannot bring down such ammunition. 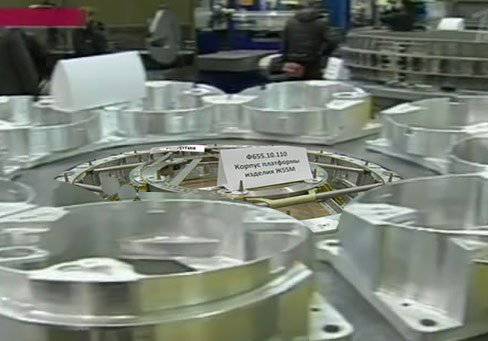 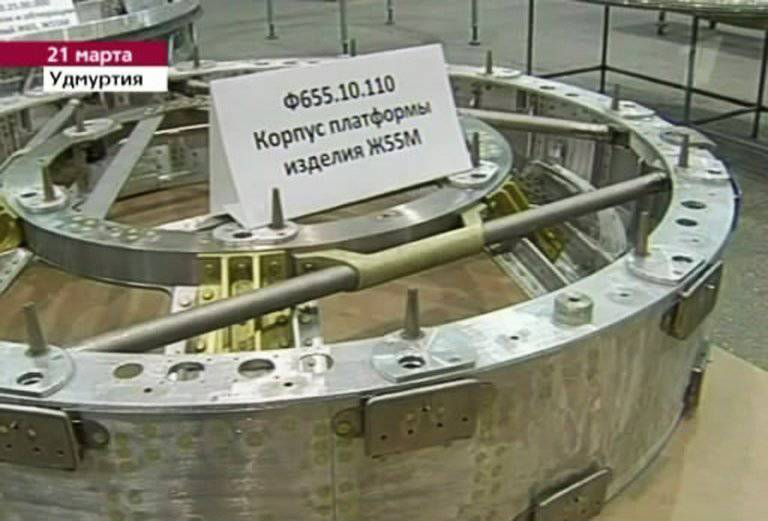 After the Security-2004 exercises, President Vladimir Putin said that the RVSN will be equipped with "the latest technical complexes that are able to hit targets at intercontinental depth with hypersonic speed, high accuracy and the possibility of deep maneuver in height and course." Further, Putin stressed that there are no random words in his message, each of them has a meaning. Perhaps this statement concerned the Yars complex. Most likely, after the completion of the PC-24 third stage, warheads are separated from it, which continue to fly in a cloud of false targets, and already in a descending atmospheric part of the trajectory, false targets are lagging behind and in the counter-flow of air, the scramblers begin to work on the warheads, allowing them to actively maneuver on hypersonic speed. All this makes the interception of such ammunition today and in the future is hardly possible. 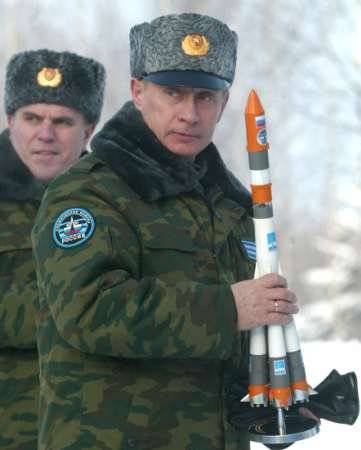 A three-stage solid propellant intercontinental sea-based Bulava rocket, the development of which was launched in the 1998 year, is now on experimental combat duty. The maximum range is 8000-9300 km. Maximum throw weight - 1150 kg. The rocket carries up to 6-ti individual targeting warheads with a power of 100-150 CT. Regarding the numerous speculations about the Bulava maneuvering warheads, Solomonov said in an interview with the National Defense magazine: “There is no secret here. When we talk about maneuvering warheads, all these things are recorded with telemetry information and are subject to accessibility by the observing party in if it monitors these launches. The rocket uses conventional ballistic type warheads, which, after separation from the carrier rocket, fly in the field of the earth as free the bottom of the falling body. With peculiar geometric shape, they have a certain aerodynamic resistance, which leads to various kinds of dynamic perturbations, and these dynamic disturbances lead to fluctuations in the combat unit around its center of mass, but in fact the center of mass combat unit moves along a ballistic trajectory. " Solomonov also said: "In 2010, we had a unique job that allowed us to make a fundamentally new step in creating a new type of combat equipment, which is the result of integrating ballistic-type combat equipment with individual means of breeding it instead of the so-called" bus "on combat missiles. This development will put an end to all the talk about our struggle with the non-existent missile defense system of the alleged enemy. " Solomonov added: "almost 30 years ago, we talked about the possibility of implementing such a combat equipment scheme as science fiction." "And last year we first put this science fiction into practice with a positive result." He explained that now "the rocket, as a whole, practically ceases to exist at the completion of the last march stage." "As is known, the existing rocket has a huge breeding ground for warheads in order to have certain defeat possibilities in the case of using multiple heads of a single rocket using multiple targets that are remote from each other."

Now the stage of breeding is not used, which alternately directs each combat unit to the flight path to the target. Apparently, now there is a simultaneous separation of all warheads from the platform. Each of them is induced by its own guidance system and engines, and then flies along a ballistic trajectory. Moreover, breeding becomes possible at a much greater distance than when using the "bus". This principle makes it possible to significantly increase the effectiveness of the complex in the conditions of overcoming the missile defense system. 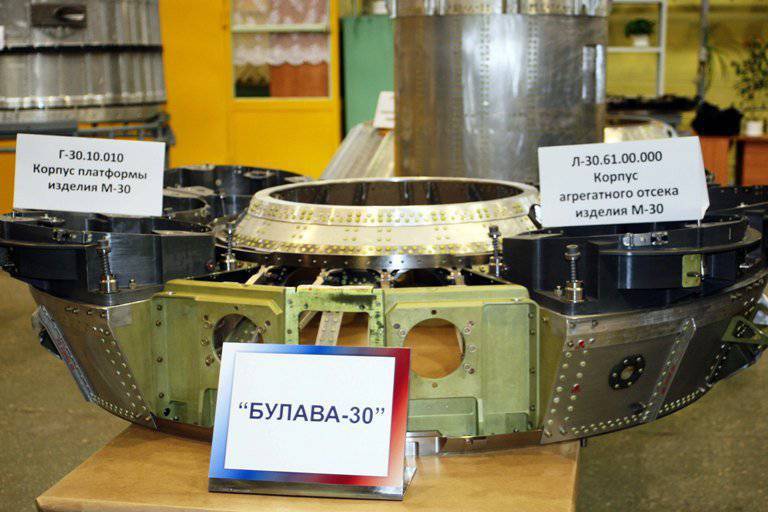 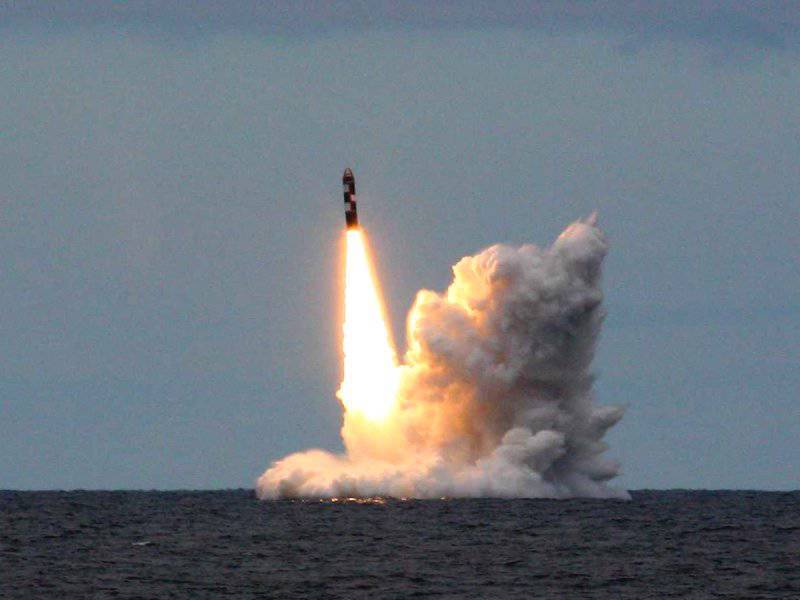 The criticism of the Bulava project was that it has a range and a drop weight less than that of the American Trident-2 and the Russian Sinev liquid-sea missiles. True, with the maximum payload, these missiles fly to the same range as the Bulava. According to Yuri Solomonov, the reduction of the payload of the rocket is associated with its higher survivability: resistance to the damaging factors of a nuclear explosion and laser arms, low active site and its short duration. According to his statement, “Topol-M, and Bulava, the active site is smaller than 3-4 times in comparison with domestic missiles, and compared to American, French, Chinese - 1,5-2 times.” The 8000 km distance is sufficient to hit almost any point in the United States (with the exception of Florida and southern California) or any point in China even when launched from the pier. From combat patrol areas, a rocket can hit any point on the territory of these states. In addition, the Bulava should have a noticeably higher pointing accuracy (lower QUO) than previous generation missiles, which reduces the power requirements (and, therefore, the total drop weight) of the missile warheads, while simultaneously maintaining and fulfilling the probability requirements goals

Often, the Bulava and its developers were unjustly criticized in the media for a high percentage of failures at trial, but, for some reason, it was silent that there was approximately the same ratio of unsuccessful launches during the tests of many Soviet missiles. And subsequently these missiles were put into service and they flew without complaints. And the fact that the rocket at least once successfully passed the tests, says about the correctness of its design. And the very first launches of the Bulava were successful. As it turned out later, the problems of unsuccessful launches were related to the quality of components and assembly. In general, they are tested to understand what is wrong and correct if necessary. Another thing is when they begin to fail already adopted missiles.

Regarding the purchase of Topol-M complexes up to the 2012 year, despite the development of the multiply charged Yars, Yuri Solomonov said the following: "It was necessary to introduce complexes with a monoblock type missile into the mobile grouping, since the mobile-based grouping is faced with the task of defeating highly protected targets , including". According to various sources, the Topol-M uses a monoblock with a capacity of 0,55-1 Mt, while at Yars, warheads with a capacity of 150-300 CT are used.

In recent years, there has been a lot of talk about the need to create a new heavy-duty ICBM to replace the old Voyevoda and Stilet missiles. But, apparently, after the change of leadership of the Ministry of Defense, these plans changed. And in a recent interview on the channel "Rain", speaking of promising developments, Deputy Prime Minister Dmitry Rogozin said that "he does not know about the new rocket." Perhaps the decision to abandon the development of a new heavy rocket was influenced by the understanding that it was not sensible to focus on providing strategic deterrence to the mining complexes. Especially in light of the intensive development of long-range precision weapons in the United States. Perhaps the decision to develop a new liquid rocket was made in favor of the personal interests of some managers.

As for the promising development systems of MITA, which will be put into service after 2016, the work will be aimed at further improving the existing complexes, and will mainly concern the development of their combat equipment. Also, KAMAZ is carrying out OCR "Platform" to create a new ground chassis for the PGRK. Compared to the old chassis produced by MWTP in KAMAZ, many operational characteristics will be improved, a number of new technologies will be used, in particular, related to secrecy, etc. 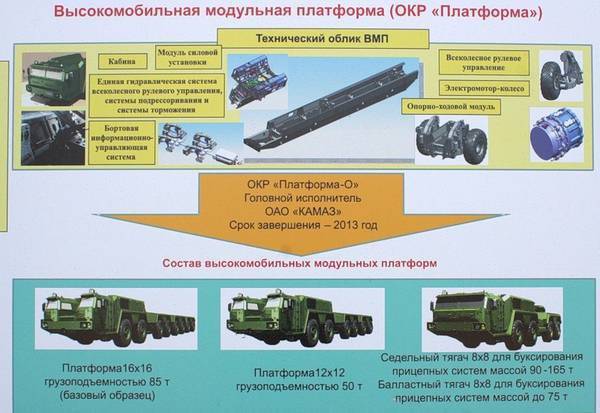 It can be added that the measures taken in the field of developing strategic weapons allow us to look to the future with confidence. These measures allow our missiles to overcome any missile defense system, including only planned to build. And the fact that the structure of the promising grouping of the Strategic Missile Forces will comprise a significant part of the mobile-based complexes, will not give the likely adversary a second to doubt that it will be destroyed in response.

Ctrl Enter
Noticed a mistake Highlight text and press. Ctrl + Enter
We are
List of destroyed the largest and most high-tech enterprisesNuclear triangle
72 comments
Information
Dear reader, to leave comments on the publication, you must to register.