New information about the project LRS-B

7 May 2013
29
Currently, the leadership of the US military is doing everything possible to reduce their costs. To fulfill the conditions set by the Congress, it is necessary to abandon some promising projects and reduce others. In addition, savings are achieved at the expense of military units, including the famous aerobatic teams, the schedule of performances which has undergone major changes. Simultaneously with the reduction of expenses, the Pentagon has to optimize its spending on the development of promising areas. Despite the difficult financial situation, the armed forces need to create new types of weapons and military equipment.


One of these types should be a promising strategic bomber, which in the future will partially or completely replace the honored aircraft Boeing B-52 Stratofortress, Rockwell B-1B Lancer and Northrop Grumman B-2 Spirit. For a number of reasons, at present no one is talking about the complete replacement of these aircraft. The new program LRS-B (Long Range Strike - Bomber, which translates as “Long-range strike bomber”) is primarily intended to replace only part of the existing bombers, which, despite their characteristics, do not meet the large number of requirements set by modern conditions.

The project of a promising long-range bomber was launched several years ago, but for economic and political reasons it underwent changes, and then it was completely closed for a while. In the course of all these events, the project changed several names: Bomber 2017 (“2017 Bomber of the Year” - it was precisely at this time that they originally planned to start delivering aircraft to the troops), NGB (Next-Generation Bomber - “Next Generation Bomber”) Lrs-b. The renewal of the project with the new name LRS-B was announced at the end of winter 2012. At the same time, the leadership of the US Air Force spoke about the timing of the start of mass construction of these aircraft.

Over the past 14 months, these plans have not been revised and now the beginning of the supply of LRS-B serial bomber dates back to the mid-twenties. Technical details of the project or even the technical specifications have not yet become public. Due to the fact that the creation of a bomber began recently, until even the exact list of participants was announced. Previously, during the Bomber 2018 program, Lockheed Martin, Boeing and Northrop Grumman participated in the creation of a promising bomber. In addition, several dozen other firms claimed the role of subcontractors supplying certain items of equipment for new aircraft.

At the end of last April, new official data appeared regarding some conceptual points of the project. Thus, the situation with the unmanned version of the promising bomber, which was previously considered one of the main priorities of the entire program, became clearer. According to US Air Force Secretary M. Donley, the first aircraft created under the LRS-B program will be manned. The unmanned version of the aircraft is still in question, but the command of the US air force, given the service life of the new aircraft, hopes to defend it. If this part of the development program is not closed for financial reasons, then the first unmanned LRS-B will go to the troops no earlier than the mid-thirties. It is too early to make serious statements about the appearance of the war of that time and the role of long-range bombers. Probably, long-range drone UAV, unified with a manned bomber, may be useful in performing a number of tasks typical of future wars. 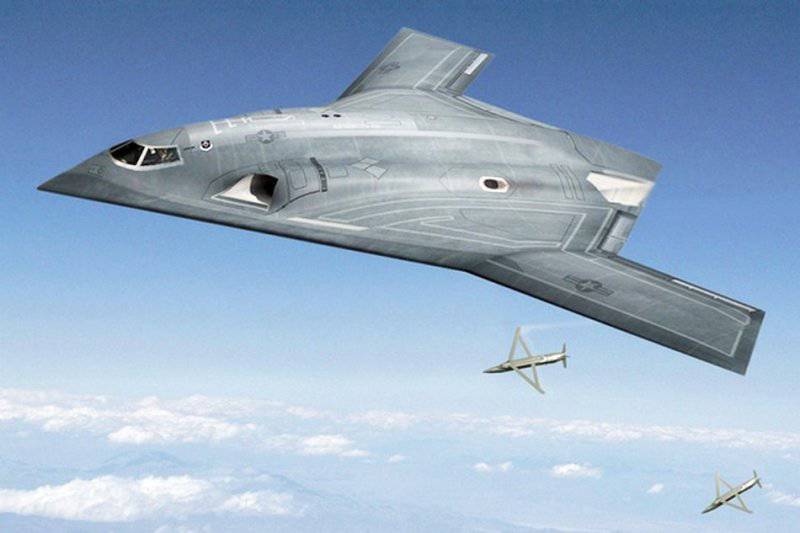 In the light of recent events, the financial side of the LRS-B project is considered as one of its most important parameters. Previously it was assumed that the NGB aircraft will cost no more than 450-500 million dollars per unit. The economic details of the new LRS-B have not yet been announced, but Donly has promised that his department will regularly report on project spending. For example, next year the Air Force intends to spend at least 350-370 million dollars on preliminary research and design work. However, the publication of detailed information on the implementation of the program will affect only finance. Technical details until a certain time remain secret.

In the future, technical information will also be disclosed, but it seems that this will not happen today or tomorrow. At the same time, the leaders of the US Air Force are already talking about the numerical aspects of the program. According to M. Donley, it is necessary to build at least 80 or even hundreds of promising LRS-B bombers. Thus, by replacing in a one-to-one proportion, the LRS-B will be able to oust from the air force either all B-52 or a fleet of exploited B-1B and B-2. However, it is too early to say which aircraft will have to give up their place. Probably the exact answer to this question is still not even the Pentagon.

A similar situation, obviously, exists in the field of appearance of a promising aircraft. To date, there are only fragmentary data on the approximate views of the US command on the new aircraft. According to reports, the promising LRS-B bomber will be barely visible to enemy air defense assets, will be able to carry a wide range of guided and conventional weapons, and will also be able to perform not only strikes on ground targets, but also reconnaissance, electronic warfare, etc.

Taking into account the expected dates for the start of deliveries of mass-produced aircraft to the troops, M. Donley said that active work on the development of the LRS-B bomber would begin no earlier than a couple of years. It is not difficult to guess that during this period the customer, represented by the US Air Force, can repeatedly change the specific requirements for the aircraft, and the United States Congress will also repeatedly protest against the cost of the program and demand savings.

Regardless of the timing and financial disputes, the people responsible for the LRS-B project will have serious and difficult work to do. They will have to formulate the exact requirements and appearance for the aircraft, which will begin its service only after more than ten years, after which it will be operational for several decades. Thus, Pentagon analysts and companies applying for a contract will have to analyze not only technical capabilities, but also trends in the development of air defense and the armed forces as a whole. If they fail to predict the appearance of the aircraft, whose capabilities will allow it to fully fulfill the tasks assigned to it in the middle of the 1st century, the LRS-B project risks repeating the fate of the B-2B and B-XNUMX aircraft. These bombers, despite the mass of innovations and advantages over the old technology, still have not been able to displace from the strategic aviation USA old B-52.