7 May 2013
18
Among the variety of firearms weapons very rarely someone pays attention to those patterns that are created by small countries. However, such weapons are sometimes quite interesting, and the solutions that are used in it are very unusual and not very common. One of the clearest examples of this is the Croatian VHS machine gun, which, although it has lost most of its unique features during mass production, was initially not a normal weapon.

At the beginning of the 2000's, the Croatian army was in dire need of replacing the machine gun that was in service at the time. The reason for this was that Zastava M70, which was one of the many AKM clones, was very outdated, moreover, it did not fit the requirements of weapons of NATO countries, primarily because of the ammunition. Instead of doing “little blood” and creating weapons based on AKs chambered for 5,56х45, as others did, it was decided to start work on creating their own sample of weapons, namely the VHS machine gun. The work on the project of the new machine gun was headed by Marko Vukovich, famous for the HS 2000 pistol.

Already in 2005, the first result of the work that could shoot was presented. The weapon was made in a bullpup layout with extensive use of plastic and light alloys. The appearance of the machine was similar to the Israeli machine gun Tavor, although this resemblance consisted, in fact, only in the layout of the weapon and the safety bracket, which completely covered all the fingers of the shooter and could act as an additional handle when held. Inside the weapon was quite an interesting recoil damping system when firing, which worked on powder gases discharged from the barrel. So when fired, in addition to the fact that the powder gases were pushing the bolt, they were also diverted to the gas buffer behind the bolt group, which allowed smoothly stopping the bolt and bolt, reducing recoil when firing. As it turned out later, such a recoil damping system, although it was quite effective, reduced the number of gun shots without cleaning, and also had a negative effect on the reliability of the machine gun. It should be noted that when using high-quality ammunition, such a system worked like a clock.

Since high-quality ammunition costs money, it was decided to greatly simplify and redesign the weapon design. From the layout of the bullpup, of course, no one refused, but the braking of the bolt group with the help of powder gases disappeared, and the appearance of the weapon has undergone some changes. The updated sample was demonstrated in the 2008 year, however, and the demonstrated sample was different from the production samples. 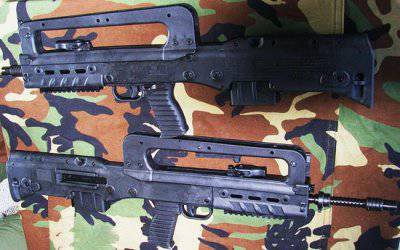 Based on this sample, two weapon versions were created: VHS-D and VHS-K with a millimeter 500 barrel and a millimeter 400 barrel, respectively. The body of the weapon is made of impact-resistant plastic, for convenience of aiming, the sights are placed high up on the handle for carrying the weapon, which reduced the length of the line of sight, and, accordingly, complicated shooting at the limits for the weapon. This disadvantage is compensated by the fact that the picatinny-type fastening straps can be additionally fastened to the weapon carrying handle and additional sighting devices can be mounted. Under the handle for transportation there is a folding shutter handle, which remains stationary when fired and can be bent to the left or right. Quite interestingly made translator fire modes and switch fuse, which is located in front of the trigger. It is difficult to judge how convenient it is, but the fact that with such an arrangement of this element a maximum switching speed is achieved is indisputable. Below the weapon on the forearm, there is a mounting plate for a grenade launcher.

The automatics of the Croatian automaton is built according to a scheme with removal of powder gases from the barrel bore, the barrel bore is locked by turning the shutter. Ejection of spent cartridges is carried out only to the right side, which causes certain inconveniences when shooting from the left shoulder. The weight of the weapon in the compact version is 2,8 kilogram, the standard version weighs 3 kilogram. The total length is respectively 660 millimeters and 760 millimeters. The machine feeds from detachable box stores with a capacity of 30 cartridges. The rate of fire is equal to 750 shots per minute.

In 2009, the weapon successfully passed all the tests and was purchased to arm the army of Croatia. However, as time has shown, the weapon meets the requirements for it, far from fully. This was the reason for the further rapid development of the machine and the emergence of VHS2 and VHS DO2, which were presented very recently.

The main distinctive feature of the new weapons is the increase in ergonomics. So, the butt of the machine became adjustable in length, which is a very infrequent phenomenon for the bull-pap layout, in addition to this, a cheek stop appeared on the butt. The handle for carrying the weapon was changed and began to be a rather long seat in the form of a Picatinny-type plank, while the aiming devices became removable, and the distance between them increased significantly. The translator of fire modes and fuse switch was also changed and began to be a turning element located above the handle of the weapon on both sides. The handle itself also changed its shape, as well as the safety bracket. Changes of these elements are aimed at making the weapon more comfortable when using warm thick gloves, but at the same time so that in the warm season the machine does not lose its convenience. But the main difference from the previous models is that the ejection of the spent cartridge case can be carried out both on the left and on the right side, which significantly increased the usability of the weapon.