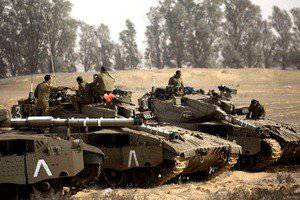 Hundreds of reservists were mobilized on April 29 during the sudden exercises of the Israel Defense Forces, which began along the border with Syria and Lebanon.


The exercise, which began on Monday, will last until the end of the week. The command emphasizes that the training activities are in no way connected with the changing situation in the region.

Speaking on the radio station "Gali TSAHAL", General Mordechai said that the exercises check the mobilization of the division and are designed to track the entire procedure for calling reservists in case of urgent need - from home to the military base.

Nevertheless, the exercises take place against the backdrop of fighting between the militants and the Syrian army in the immediate vicinity of the border with Israel. Also last week, the Israeli Air Force shot down a drone that invaded Lebanese airspace in the country, which gave journalists and politicians a reason to talk about the threat of war with Iran.

Note, the exercises are held against the backdrop of the ongoing fighting in Syria, the invasion of Lebanon unmanned aerial vehicle, which was shot down last week by the Israeli Air Force, the arguments of politicians and journalists about the threat of conflict with Iran and its allies, as well as the need for a military operation in Syria to ensure chemical preservation weapons.

Local media claim that the agenda was received by two thousand reservists. The Times of Israel newspaper estimates the total number of troops involved in the exercise in 10-20 thousand people. "These are the first exercises of such magnitude in a few years," the Jerusalem Post writes, in turn.

According to the "Debka" version, sudden exercises will increase military tensions on the Israeli, Jordanian, Syrian and Lebanese borders. Tehran, Damascus, and Hezbollah headquarters have suggested that Israel is working out options before US military intervention in Syria. The exercises also relate to the speech that Hezbollah leader Hassan Nasrallah will give on Tuesday night, if Israel attacks, Hezbollah will be on the side of Syria.

1. Aerial bombardment of Syrian military bases and infrastructures, which are a stronghold, and help to keep Bashar Assad in power;

2. A missile strike against the deployment of chemical weapons from the sea and from bases based in Europe and the Middle East;

3. Deploying 20,000 US troops at the Jordanian-Syrian border.

Also, Obama can combine elements of all three options and hold them simultaneously.

Unexpected Israeli military exercises and the concentration of reservists along the borders of Syria and Lebanon. Israel is checking ground, air and naval units for readiness in a potential US military operation against Syria.

Sources:
http://www.regnum.ru/
http://lastbesthope.sayanythingblog.com
http://www.debka.com
http://newsru.co.il
Ctrl Enter
Noticed oshЫbku Highlight text and press. Ctrl + Enter
We are
Results of the week. "Either true or all is well"
Military Reviewin Yandex News
Military Reviewin Google News
40 comments
Information
Dear reader, to leave comments on the publication, you must to register.