Central Asia in the US strategy after 2014 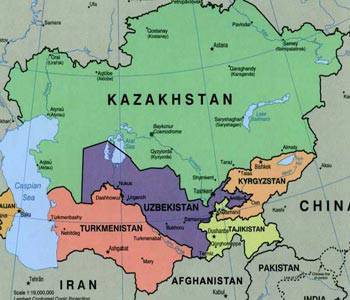 The calculations of the US think tanks, discussions in Congress’s subcommittees and in the press suggest that the United States is looking for a new model of presence in Central Asia after 2014. Some directions for the evolution of Washington’s strategy in the region can already be traced, which are likely to remain relevant in throughout the second term of office of the B. Obama administration.


The shift in foreign policy priorities in the APR and budgetary problems are pushing the United States to curtail its programs in Central Asia. For the first time, the State Department and the United States Agency for International Development (USAID) sharply reduced funding for Central Asian projects in 2011, reducing allocations from 436 to 126 million dollars. In the future, the gradual reduction of expenses, which in 2013, according to the budget request of the State Department to Congress, should amount to 118 million dollars, continued. (reduction by 12% to the level of 2012). Since under the sequestration there were mainly programs of a political, socio-economic and humanitarian nature, we can expect a decrease in the American influence on the internal political processes in the Central Asian republics. It appears, however, that such a decline will occur smoothly. On the one hand, the US Department of Foreign Affairs is taking steps to optimize narrowing budgets, for example, through the extensive use of Internet technologies in diplomatic practice, a less costly but promising tool for mobilizing protest and opposition sentiments. On the other hand, comparable injections into NGOs, the media and other public institutions of Central Asia are carried out by private American foundations and allied European structures, whose grants soften the effect of the falling capabilities of US government agencies.

According to an alternative scenario, the security situation is developing, where Washington, on the contrary, is increasing spending on all sorts of trainings, equipment supplies, information sharing and other interaction with the security and special services of the countries of the region. Only in 2012

The United States (through the Department of State, the Pentagon and the Department of Energy) increased the cost of cooperation with the Central Asian republics in this area immediately by 40% or 60 million dollars. At the end of the year, they amounted to 215 million dollars, which is almost twice the allocations for political and humanitarian initiatives. Interestingly, the increased interest in security issues is also shown by the European Union and personally by the EU Special Representative for Central Asia Patricia Flor, who are developing a new Framework Strategy for the region, replacing the old document expiring in 2013.

Another distinctive feature of the updated US approach to Central Asia is the intensification of military technical contacts. It is through the Department of Defense of the United States today that the main resources are allocated and, presumably, the key decisions are made in the region.

Few people doubt the fact that the Americans will take steps to preserve in Central Asia a large military facility necessary to accompany the Afghan operations, which today is the Transit Transportation Center at the Kyrgyz airport Manas. The base of this class for the United States is not only the most important infrastructure hub through which most of the rank-and-file and especially valuable cargoes are transferred to the Afghan theater of war, but also the closest of the three hop airports producing refueling in the airspace of Afghanistan, and a convenient base for placement of electronic surveillance equipment.

2005’s “tulip revolution” experience shows that in order to preserve Manas, American diplomacy can go for the most serious measures, up to interference in the internal affairs of Kyrgyzstan, where an impressive part of the political establishment is still focused on Washington. In American expert circles, the need to organize the first in stories the visit of the US President to Central Asia with a stop in Bishkek with a view to solving the tasks facing the United States, including the extension of the Manas agreement expiring in July 2014. In this situation, the option of relocating the US military base to previously prepared sites in other republics, one of which, in particular, was established at the Uzbek Navoi airport, reconstructed with the help of South Korean contractors and is currently idle, cannot be ruled out.

There is a high probability that the network of smaller US military facilities will grow: training camps for special forces; multimodal transshipment points for the diversification of transit routes for NATO cargo; warehouses for storing equipment and weapons near the borders of Afghanistan, which can be re-deployed and transferred to the conflict zone in case of aggravation of the situation there (the practice of creating such warehouses was used by the American command in Kuwait during the withdrawal of troops from Iraq to 2011).

At the same time, Tashkent increasingly claims to be the priority military-technical partner of the United States in Central Asia. The main channel of the Northern Supply Network, which supplies the NATO grouping in Afghanistan, passes through the territory of Uzbekistan. The authorities of the republic are negotiating with Washington about the transfer of military equipment withdrawn from the IRA to the Uzbek army, including reconnaissance drones, helicopters and wheeled armored vehicles with enhanced mine protection.

Additionally, Central Asia is increasingly viewed by Americans as an important rear support area. In 2012, Washington immediately increased its supply purchases in the Central Asian republics by increasing the volume to 7 billion dollars, where the main share (1,3 million) fell on the purchase of fuel from Turkmenistan. A similar amount in 820 billion dollars. allocated to 1,3. If, after 2013, the White House does not give up promises to support the current leadership of the IRA, it will only need an average of $ 2014 million each year to provide fuel and lubricants to the Afghan National Army. or 555 billion dollars. during 2,8-2014 Given the shortage of petroleum products in Afghanistan and problems with their imports from neighboring countries, the Turkmenbashi refinery in Turkmenistan will probably remain a significant source of fuel for Americans in the near future.

In general, the current surge of military-technical cooperation between America and the Central Asian countries is associated with the intensification of actions in Afghanistan, so its prospects will largely depend on the development of the situation south of the Amu Darya, including the success of the Pashtun insurgency and the retention of power in Kabul by the government loyal to the West.

As for the US economic policy in Central Asia, most likely, it will, as before, be aimed at solving three main tasks - gaining access to Caspian hydrocarbons, weakening strategic rivals represented by Moscow and Beijing, economic stabilization of Afghanistan and reducing its dependence from external grants.

The current commercial interests of US companies are focused on Central Asia's oil resources, whose proven reserves range from 2,5-3% of the world total. Accordingly, the situation will remain when investments in the oil sector of Kazakhstan (29 billion dollars over 1993-2009) will significantly exceed US investments in all other countries and sectors of the region combined (the next Uzbekistan on the list for 2009) 500 million dollars.). At the same time, according to forecasts, Astana’s desire to revise oil concessions of 1990-s under pressure from fiscal and environmental claims, as well as the geographical isolation of the region, the raw materials from which have to be delivered to Western markets through the Russian pipeline system, will be a serious problem.

On this basis, the United States will continue lobbying the so-called. "Southern energy corridor" bypassing the territory of Russia. But opposition to the construction of pipelines under the Caspian will push them to concentrate mainly on creating the western section of this corridor between Azerbaijan and Turkey, which in June 2012, mediated by Washington, signed an agreement on laying the Trans-Anatolian gas pipeline to 2017.

The economic program of the New Silk Road, announced by the State Department in the summer of 2011 and designed to create infrastructure between Central and South Asia and Afghanistan, as well as to liberalize trade between them, is designed for the long term. Although within the framework of the New Silk Road, the United States has been successful in implementing a number of local projects (several highways, bridges, power lines and railway lines from Uzbekistan to Mazar-i-Sharif), the prospects for large-scale interregional communications, such as the TAPI gas pipeline and CASA-1000, are foggy. Their “incarnation in the metal” is hampered by the unsafe route through Afghanistan, the high cost, the uncertainty around the raw material base, the tensions of potential buyers and transit countries for raw materials, as well as the alternative offers of Iran and China. Nevertheless, the White House will probably not abandon projects whose promotion promises a decline in Russian and Chinese influence in Central Asia, a further isolation of Iran, and opening of access to the gas resources of the Caspian region.

The new Silk Road is also still ephemeral, but still a potential competitor of the Eurasian Union. The latter in Washington is increasingly seen as a mechanism for strengthening the position of the Kremlin in the post-Soviet space. From here, he will be subject to increasing discredit from the West. It is expected that, as a counterweight, the Americans are forcing the process of accession of the countries of the region to the WTO under conditions that complicate their subsequent accession to the legal framework of the CU and CES.

In conclusion, it should be noted that forecasting the future strategy of the United States in Central Asia is greatly complicated by the presence of many uncertainties, including the development of the situation in Afghanistan, a possible attempt to forcefully shift the Iranian government, a new phase of the global financial and economic crisis, a change of heads of state in Uzbekistan and Kazakhstan and etc. Obviously one thing - the region will remain the scene of a clash of interests of the leading world powers - Russia, the United States and China.