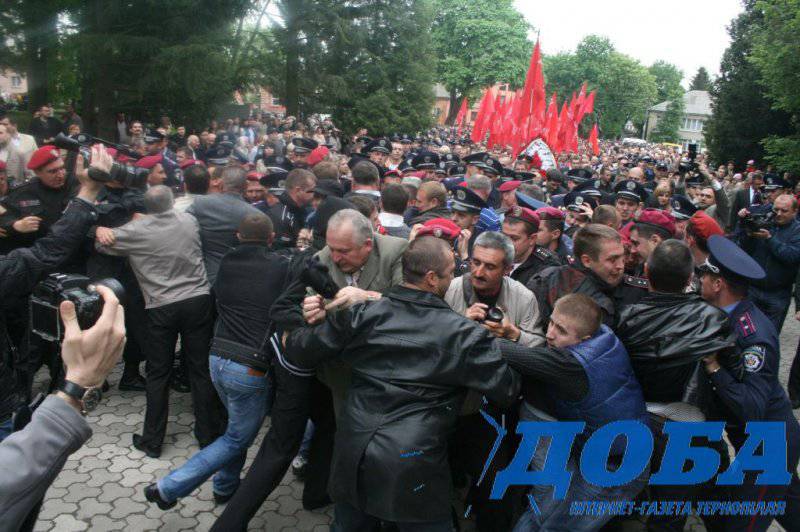 Western regions of Ukraine seriously intend to declare the day of 9 in May as a day of mourning. Moreover, the relevant bills have already been adopted by Lviv and Ivano-Frankivsk city councils. According to these documents, on Victory Day festive processions are prohibited, as well as the use of symbols of Soviet times, including the red flag and veterans' military orders. Such a decision of local authorities (which, by the way, are mostly represented by “Svoboda”), causes confusion and bewilderment, because, according to Ukrainian legislation, the holiday 9 is recognized as an official public holiday in May. Obviously, Ukrainian laws mean nothing to neo-fascists.

In accordance with the words of one of the initiators of the decision, the city council deputy from the Freedom party, Lyubomir Melnychuk, all the statements of the Ukrainian government about the celebration of 9 on May and the use of one of the main symbols of communist terror - the red flag - is another provocation, which In some cases, it should not be allowed in Lviv. Also, the same deputy called on Ukrainians to spend the day in prayer for those who died in the war.

At the same time, the logic of decisions made by regional authorities is rather difficult to understand. Indeed, according to the same Melnichuk, Lviv, as a European city, must adhere to the European practice of honoring those who died in World War II. But at the same time, it is he who proposes to declare not only 9, but also 8 on May, that is, the day when all of Europe celebrates victory over Nazi Germany ...

In fact, to understand the true reason for the decisions made is very simple: Ukrainian neo-fascists by any means necessary to replace the bright holiday of Victory with its full opposite - the day of sorrow. Thus, according to the "independent", they will be able to erase from the memory of the people historical the truth, which was common to Ukraine and Russia, replacing it with its version. At the same time, the main blow is aimed not only at the common Soviet past, but also at its carriers - veterans who still remained in the western regions. It turns out that all the most valuable and important that has been preserved since Soviet times, with the abolition of Victory Day, is subject to destruction and eradication. And the veterans, thanks to whom this victory was won, and which are becoming less and less every year, no longer have the right to come together to remember past times and celebrate a bright holiday ...

But that's not all. The decision to eradicate the Soviet legacy of "Svobodovtsy" not limited. In addition to the decision to recognize 8-9 in May as days of mourning, the bill of the Lviv City Council also says that these days are recognized as days of grief for the victims of all totalitarian regimes, including Hitler’s. It turns out that the representatives of the Svoboda party, who currently occupy leadership positions, are inherently anti-fascists, and Shukhevych together with Bandera are not really Hitler's henchmen, but the real heroes of Ukraine. So it turns out that the decision taken by the Lvov and Ivano-Frankivsk authorities is not only to erase the entire Soviet legacy from people's memory, but also to cleanse their heroes from the Nazi mud.

It is clear that such illegal decisions could not go unnoticed by the government. So, in particular, Prime Minister N. Azarov during a briefing held on April 30, stated that the decision taken in the western regions is illegal, because it contradicts the Basic Law of the country. The Prime Minister stated that the decision was beyond the competence of local authorities, and there was no point in talking about any European integration, since the local authorities themselves violated the Constitution. According to Azarov, the recognition of the 9 of May as a day of mourning is immoral, but for sorrow there is another day - this is the 22 of June, the day the war started. At the end of his speech, the Prime Minister said that everyone who is trying to change history should remember what happened in this case (referring to Nazism), and also assured that the government will do everything possible so that neo-Nazism in Ukraine has no chance to development.

Representatives of the Party of Regions and the Communist Party did not stand aside either. Regionals are confident that the decision taken in Galicia is primarily a betrayal of their own people, because 9 of May was always considered a Victory Day and to prohibit it is to betray the memory of their ancestors, who at the cost of their own lives defended the future generations . At the same time, the regionals are confident that the scandalous solution is a rough provocation, which aims at destabilizing the situation in society and provoking the popular opposition. A vivid proof of this is the statement of the Lviv communists about their intention to celebrate the Victory Day with flags and processions. Thus, it is quite possible that the history of a year ago can be repeated, when in Lviv the neo-fascists actually persecuted the veterans ...

According to representatives of the ruling party, all attempts by neo-Nazis to defile the memory of the people's feat or the Victory symbols will be harshly suppressed and suppressed. But if you think well, behind these words is not quite what I would like. So, Lviv police received an order to protect military monuments in the region from vandals from 7 on May, but at the same time there is no mention of the need to ensure protection to veterans during demonstrations. Moreover, around 150 law enforcement officers are allocated to everything, and this is to the thousands of neo-Nazis who live and are active in Lviv ...

If you go a little further, it becomes quite obvious that such a decisive “anti-Freedom” position of the regionals is not really so anti-fascist. More recently, one event occurred which is proof of this: the Poles accused the Ukrainian Freedom Party of neo-Nazism, but the Ministry of Foreign Affairs, which is under the control of the government and, accordingly, of the Party of Regions, came to their defense. Recall that in early April, the Polish government adopted a resolution recognizing the OUN-UPA, SS “Galichina”, as well as the Ukrainian police, which served the fascists as criminal organizations that committed genocide against the Poles in 1939-1947. In response, the Ukrainian government perceived such a decision as an unfriendly gesture towards Ukraine, as interference in its internal affairs, and moreover, it perceived this project as an attempt to complicity with Russia ...

In addition to the authorities, some political scientists also expressed their attitude to the decision taken in the West of Ukraine. Thus, according to G. Trofimchuk, the first vice-president of the Center for Modeling Strategic Development, such a decision is quite normal and natural, because it happened to almost everyone who had escaped from the so-called Soviet occupation zone. In the end, all this euphoria faded away, because there is no way to go back to the past. Therefore, do not interfere with Lviv "enthusiasts": if they are sure that the holidays need to be renamed or even establish a new holiday - let them do, it will be more interesting to watch them from the side.

Political analyst D.Orlov, who is the general director of the analytical center “Strategy East-West”, says that in the light of the current situation, the Ukrainian head of state is quite unfairly called a dictator. After all, dictators in the event of even the slightest focus of separatism and disobedience immediately surround him and pacify him with weapons. And Yanukovych is still a Democrat, what kind of search is necessary. According to Orlov, Victory Day is a holiday fixed at the state level, and if the head of state ordered to celebrate it, then the task of the local authorities is to execute this order in full, and not make any incomprehensible decisions.

Political analyst L.Savin, the editor-in-chief of Geopolitics, is convinced that the decision of the Lviv authorities is a consequence of the coming to power of ultra-right neo-Nazis, who were supported by the finances of the same Yanukovych. Therefore, such decisions may appear in other areas of the western region, especially in those of them where there is a fairly large percentage of active Bandera nationalists. As a result, a further split of Ukrainian society and new conflicts may occur. Therefore, all free thinking of local authorities must be stopped.

Anyway, the decision has already been made, and one can only hope for the sanity of the government, which will take more stringent measures against the regional authorities. However, there is still a small chance that the Ukrainian neo-Nazis still have at least a little philanthropy and respect for their ancestors, and the decision will not have any serious consequences, although it is unlikely ...

Ctrl Enter
Noticed oshЫbku Highlight text and press. Ctrl + Enter
We are
Day of the national flag of the DPRResults of the week. “A smart face is not a sign of the mind”
380 comments
Information
Dear reader, to leave comments on the publication, you must to register.