"Abrams" for the city: a set of TUSK

6 May 2013
68
During almost all local conflicts of recent years tanks and other armored vehicles had to act in unusual conditions for themselves - in the city. Armored vehicles adapted to defend against attacks from the front hemisphere were in a very difficult position. The widespread use of infantry anti-tank weapons, combined with the ability to ambush any home, made tanks, armored personnel carriers and infantry fighting vehicles fairly easy targets. The world's leading manufacturers of armored vehicles were forced to create a set of measures that could increase the likelihood of a tank surviving during hostilities in the city. 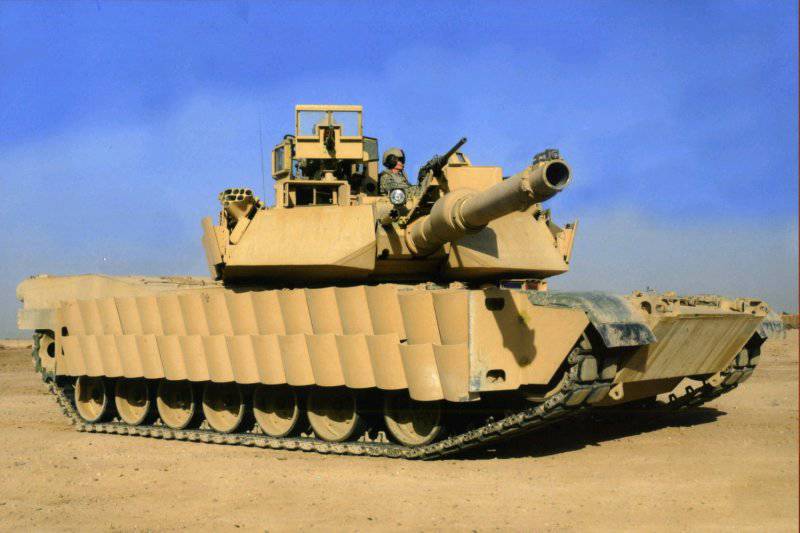 In the United States, such work began after the start of the war in Afghanistan, but prototypes of ready-made systems appeared only after the invasion of Iraq. A set of additional equipment for tanks M1A1 and M1A2 Abrams called TUSK: Tank Urban Survival Kit - "Tank Kit for survival in the city." The first contract for the supply of TUSK kits was signed only at the end of the summer of 2006, i.e. after all the major fights involving American tankers. General Dynamics Land Systems was selected as a contractor. The contract meant the supply of 505 kits with a total value of 45 million dollars.

Since the reservation of all modern tanks was not originally intended to protect the vehicle from anti-tank weapons from all angles, the TUSK kit includes tools that increase the level of defense of the sides and the stern. Thus, the sides of the hull and turrets of the Abrams tanks are covered almost completely along the hinged panels with the ARAT-2 dynamic protection units installed on them. The most vulnerable part of the tank - its feed - is covered with an anti-cumulative grille. The choice of this particular means of protection was due to the peculiarities of its location. On a relatively thin forage sheet, it is impossible to install dynamic protection equipped with an explosive that can damage some units of the power plant.

Also taken some measures to improve the mine protection of the tank. To do this, additional panels of combined armor are installed under its bottom. A characteristic feature of all protection enhancements that are part of the TUSK kit is the possibility of installing them in a military workshop or even by the crew. Thus, it is possible to quickly equip tanks with additional protection systems and immediately send into battle.

It is worth noting that the speed and ease of installation of the elements of the TUSK kit concern not only dynamic, combined, or reshot protection. The same is observed in the case of a weapon upgrade kit. After installing TUSK, the M1A1 or M1A2 tank saves its native weaponbut its combat potential increases significantly. So, for example, the 7,62 millimeter machine gun M240, located in front of the loader's hatch, received several useful "additions". Now loader when firing machine guns protects the new metal shield with an observant device of bulletproof glass. As a result, the tankman is less likely to get injured. If necessary, the loader does not even need to lean out of his hatch. The TUSK kit includes hardware that allows you to control the machine gun M240 directly from the reserved space. It is noteworthy that the new machine gun turret has a two-channel sight with a thermal imaging channel. 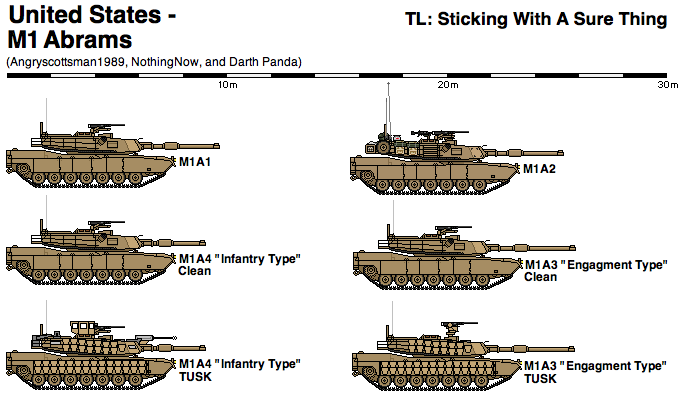 Instead of a standard turret with a large-caliber machine gun M2HB above the commander’s hatch, the TUSK kit includes a full-fledged combat module with remote control, on which a similar type of weapon is mounted. The Kongsberg / Thales M151 Protector system has been used on M1126 Striker armored personnel carriers for quite some time and received mostly positive reviews. If necessary, the combat module can be equipped with a thermal sight, which significantly increases the firing capabilities of the tank. In addition, the M151 design allows you to mount not only a large-caliber machine gun, but also other types of weapons, such as an automatic grenade launcher.

Separately, it is worthwhile to dwell on the reasons why the Abrams' machine guns underwent such serious changes. The first of these reasons concerns the protection of the crew. By controlling all the weapons from inside the combat compartment, tankers do not risk getting wounded or being killed by the enemy’s small arms. The second is the importance of machine guns in urban environments. Since the main danger in urban battles are infantrymen with grenade launchers hiding in houses, rifle and large-caliber machine guns are the most effective means of fighting them. The power of tank guns, with rare exceptions, is redundant for the destruction of enemy grenade launchers, so the machine gun becomes the most convenient weapon.

In urban battles, interaction with the infantry accompanying the tank acquires special significance. In the middle of the last century, on some models of tanks, telephone systems were installed to communicate with the foot units. Despite the development of radio communications, such things still remain comfortable and relevant. Thus, during the war in Iraq, a certain number of US Marine Corps M1A1 tanks, in addition to radio stations, were equipped with simple wired telephones for communication with infantry. Included TUSK such equipment is present initially. 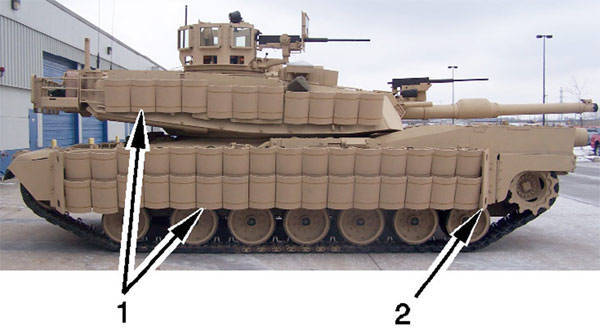 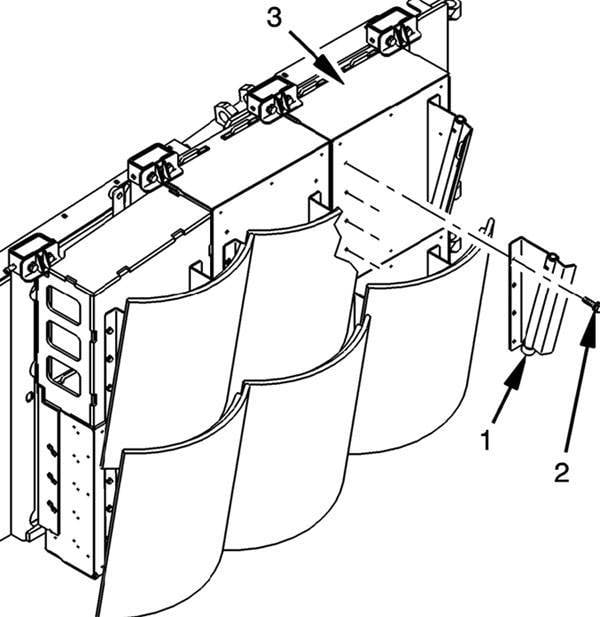 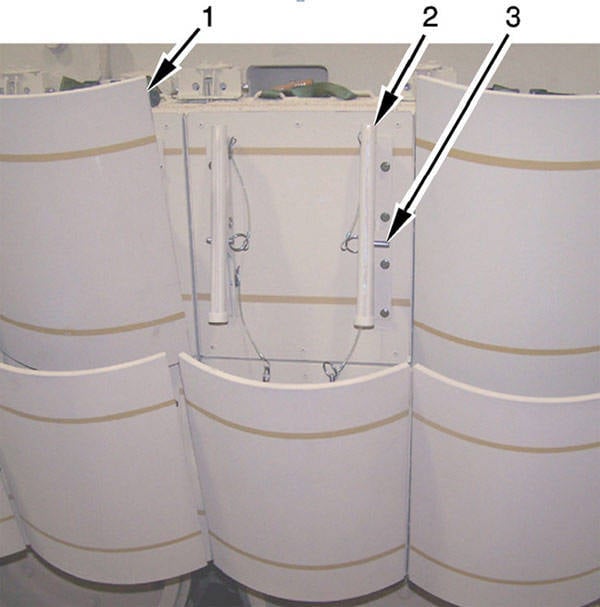 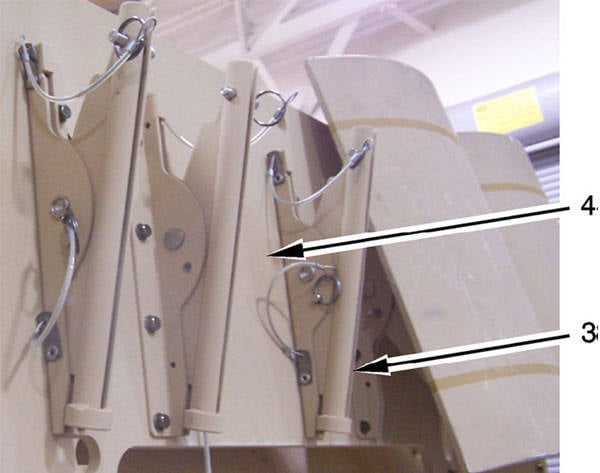 DZ ARAT-2 on the tower

Deliveries under the 2006 contract of the year ended in the spring of 2009. According to reports, almost all delivered TUSK kits were immediately mounted on the tanks available in the troops. It is easy to calculate that the number of tanks upgraded for fighting in the city is only a few percent of the total number of Abrams' troops available. Therefore, in the next few years we should expect additional purchases of kits for action in the city.

During the manufacturing of the first batch of 505 kits, the US Department of Defense separately ordered the development of a new dynamic protection and a number of other systems. All new elements of the TUSK set have already been tested in the army and received approval. As a result, sets from different batches differ slightly from each other in their particular composition. In the future, this process will continue and the TUSK system will be replenished with new components that have advantages over the old ones.

The first converted tanks were tested in real conditions only in the 2007 year, when events in Afghanistan and Iraq were completely transferred to the stage of partisan war. Nevertheless, even in such conditions, it was possible to test the new kits in practice. Before the other components of the TUSK kit, dynamic and anti-mine protection was incurred. Losses and damage to equipment significantly reduced. As for the upgrade of weapons and equipment associated with it, these measures have significantly reduced losses among personnel. The positive experience of using tanks with TUSK kits allows us to speculate about the further development and new purchases of such systems. 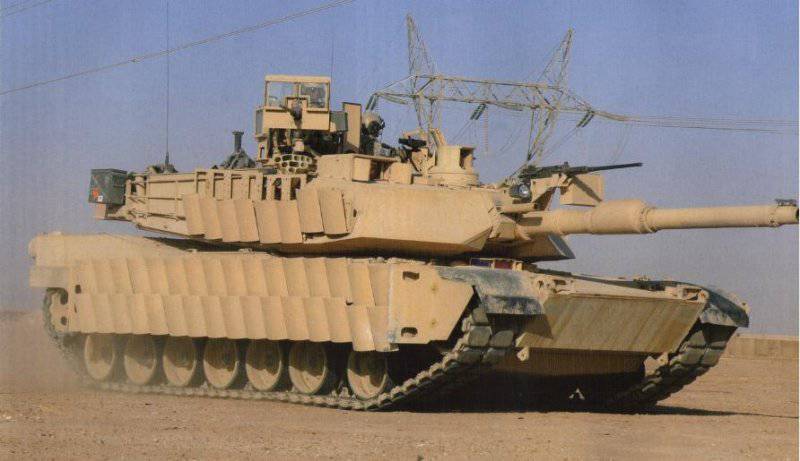 Ctrl Enter
Noticed a mistake Highlight text and press. Ctrl + Enter
We are
On the loss of tanks Abrams"Abrams" without "dill" and embellishment
68 comments
Information
Dear reader, to leave comments on the publication, you must to register.