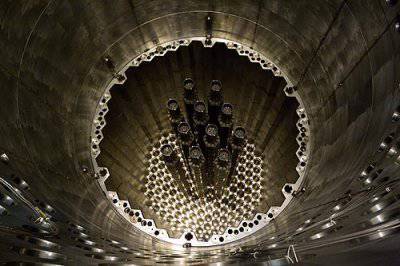 Rosatom is ready to build nuclear power plants everywhere. Ecologists? Seismologists? Economists? No no; today - projects, tomorrow - loans, the day after tomorrow - construction, and let all these comrades come later. The key word in the activities of Rosatom, which cannot be called a commercial or market language — it will not do much the same about praising the nano-successes of Mr. Kiubenko’s ideological associate — the term “credits”.


Rosatom boldly reports: 12 May 2010, during the visit of Dmitry Medvedev to Turkey An agreement was signed between Russia and Turkey on cooperation in the construction and operation of the Akkuyu nuclear power plant. The construction of the first Turkish NPP will be implemented under the “Build-own-operate” conditions. At the beginning, the project will be financed from Russian sources, according to the Rosatom website, and then it is planned to attract investors from both Turkey and third countries.

Investors can not see. Yes, and in Turkey are not very happy. The project has a lot of flaws, считает columnist for the newspaper Milliyet Mehves Evin.

According to Bulat Nigmatulin, the former Deputy Minister for Atomic Energy of the Russian Federation, the Akkuyu project is unprofitable for Russia. If only because Russia "is actually sponsoring the construction of the station from its budget."

As Andrei Ozharovsky writes (bellona.ru) during the visit to Vietnam 7 November 2012, Dmitry Medvedev met with Truong Tan Shang, President of Vietnam, and held talks with Prime Minister Nguyen Tan Dung. Mr. Medvedev talked in Vietnam about the construction of a nuclear power plant by Rosatom. Nguyen Tan Dung later confirmed to the press that the construction of a nuclear power plant would be implemented, and Dmitry Medvedev said: “We have very important basic areas of cooperation. I will mention, of course, the creation of the first nuclear power plant. We have discussed this issue and would also like to state that we will continue to be guided by the highest criteria of quality and safety of the relevant facility. ”

Responding to questions from Russian journalists, Dmitry Medvedev confirmed that construction costs in the amount of up to 10 billions of dollars will be paid through a state loan: “If we talk about cooperation in the nuclear field, you probably mean first of all the creation of a nuclear power plant,” here it’s really very big, a flagship project like this, its cost is high - under 10 billion dollars ... In general, we are in a state of almost complete agreement, and we will work according to the schedule that we the Vietnamese side will offer it, because in the end it will be their nuclear power plant, and it was for this nuclear power plant that we gave them a state loan. This is good for us, because Rosatom's order book is increasing, this is extra money, this is an opportunity to roll in the most advanced nuclear technologies. ”

The construction of nuclear power plants in Bangladesh will start in January 2014. The total cost of the project will exceed 2 billion. Head of Rosatom Sergey Kiriyenko сообщил: “1 January 2014 will begin real work on the site, in the 2015 year, the main phase of the works will begin, which will take about the 5 years, so we are talking about the launch of nuclear power plants at the beginning of 2020's.” Further, the country's chief nuclear scientist cheerfully noted that Bangladesh would also take a loan from Russia for the second stage of work. The amount will exceed 1,5 billion.

Bangladesh’s Russian nuclear choice was in favor of Russia, although negotiations were also held with other major players in this market. Former Deputy Minister of Russia for Atomic Energy, Viktor Sidorenko, employee of the Kurchatov Institute says: “This indicates that the attitude towards the Russian technology that has been formed in recent years gives rise to sufficient confidence so that, along with the technological advantages, we can also evaluate the financial and credit opportunities offered by the Russian side. The advantage that can be attributed to competitive - is that we have a sufficient set of projects implemented in other countries. That is, you can see what is called, touch it, be it China, India or working stations in other countries. This is a demonstration that the technology exists and works reliably. ”

In addition to the “sufficient trust” that Mr. Sidorenko said, it should be noted that the conditions offered by the government of Bangladesh to potential future partners did not look very tempting. You see, this state has almost no money, and we are talking about the construction of a nuclear power plant on credit. (Weaponthat Bangladesh is going to buy from Russia will also be supplied on credit, there is also a speech about billions). Therefore, it appears that the major players did not consider it possible to lend to Bangladesh, nor did they receive approval from their ministries of finance for budget billions. The big question is also whether Bangladesh will return a Russian loan at all. There is no question only that Rosatom, led to a bright future by Mr. Kirienko, will successfully master atomic billions.

NPPs are being built on Russian loan money in Belarus. Under the Agreement of 15 in March, 2011 of the NPP at the Ostrovets site in the Grodno region is being built on a turnkey basis by the Russian side. November 25 2011, the site says Rosatom, an Intergovernmental Agreement was signed on granting the Russian side to the Belarusian side a state loan for the construction of the station.

Construction of the Kudankulam NPP is the same Rosatom in India also not without credit. Wherever you look, everywhere credit.

And Deputy Director General of Rosatom State Corporation for Development and International Business, Kirill Komarov boasts successes: “At the end of the year they had ... 21 block abroad and nine that are built domestically. Only thirty units. This is an absolutely unique situation. Nobody in the world builds that much. Even China, which is now being set as an example for everyone as the most dynamically developing country. They, unlike Russia, have not one, but two state-owned nuclear companies. At the same time, Rosatom is building in China. So, two Chinese companies are building 25 reactors, and we are building thirty. In this sense, we are the champions. And we bypass competitors with whom we are in the same league - I mean the French and Americans. Only today they offer on a par with us nuclear reactors, which can be conventionally attributed to the “three plus” generation.

“Nobody in the world builds so much” ... Why is it so surprising? No one in the world is cut off such pieces from a budget cake.

“The aggregate volume of Rosatom contracts is 69,3 billion (+ 18.4 billion to the level of 2011 of the year),” writes Ivan Lizan ("But"). “It is even planned that the corporation will enter the Latin American market.”

Yes, with such a scale, in principle, it is possible to enter the market of Antarctica. And even Mars.

The leader of the Yabloko party, S. Mitrokhin, calls Rosatom activities nothing more than robbery. In the article "How Rosatom Robs Russia" he's writing:

“For any country after Chernobyl and Fukushima, it is not easy to decide on the development of atomic energy in their country, such a“ pill ”needs to be sweetened. How?

It's very simple: to build these foreign NPPs at the expense of the Russian budget! ”

Ecologists and seismologists, the author continues,

“... horrified by the plans to build the Akkuyu nuclear power plant in Turkey in a seismically dangerous territory.

But who will listen to seismologists if Rosatom intends to pump out $ 4 billion from the RF budget for this construction! <…>

Approximately the same amount ($ 4 billion) will be received from us by India, China, Belarus, Bangladesh and many more other countries, given the seductiveness of the offer.

The full payback period for each NPP is 25-30 years. <...> And who will guarantee that in 20 years the then regime of Bangladesh will not wipe its legs (or some other part of its powerful body) about the agreement with Rosatom?

But Rosatom has not its own money. Our good state is ready to allocate even more to it, taking money from retirees, state employees, infrastructure development projects in Russia. In domestic education and medicine, which are due to "lack of funds" must be commercialized. Imposing heavy tax and insurance yoke on their own small business and individual entrepreneurs. If only our dear Bangladesh would not have problems with power supply interruptions! ”

To this it must be added that the Russian government does not see any particular difficulties in writing off debts, and “international partners” are just as happy with the simplicity of the issue. In the newspaper Kommersant summed up debt write-offs for the last fifteen years.

During this time, Russia has written off debts on loans extended by the government of the USSR and the Russian Federation to various countries in the amount of about $ 80 billion. Here we have Ethiopia, Mongolia, Laos, Syria, Algeria, Afghanistan, Iraq and Libya, and the DPRK, and Vietnam (by the way, a potential customer of nuclear power plants). In 2000, he was written off 86% of debt from 11 billion dollars - 9,5 billion.

It is possible that this list will replenish Bangladesh.

Who is good to live in Russia?

Observed and commented on Oleg Chuvakin
- especially for topwar.ru
Ctrl Enter
Noticed oshЫbku Highlight text and press. Ctrl + Enter
We are
"Sultan" apologizes or not? Prospects for the normalization of Russian-Turkish economic relationsResults of the week. "Go on a horse, a century of will not be seen!"
Military Reviewin Yandex News
Military Reviewin Google News
133 comments
Information
Dear reader, to leave comments on the publication, you must to register.