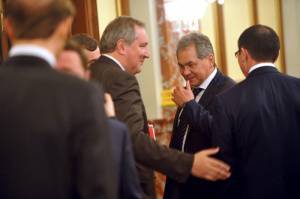 A new grouping of troops should introduce into practice breakthrough ideas in military affairs.


In the near future, according to NG, an experimental group of troops (forces) - EGV will be created in the Armed Forces. In it, together with military experts, including those in the reserve, and regular test-testing centers, representatives of the defense industry and military science will be involved. In the post-Soviet stories Russia is a completely new structure, which, according to the plan of its developers, should ensure the development and implementation of breakthrough ideas in military practice. This was told to "NG" a source in the Russian government. He noted that the project was already supported by the Chairman of the Military Industrial Commission (MIC), Deputy Prime Minister Dmitry Rogozin, giving instructions to a number of ministries, including the Ministry of Defense and the Ministry of Industry and Trade, to consider this issue.

According to the source, the organizational structure of the experimental group will depend on the list of tasks defined by the military leadership of the country. “The main goal is based on the purpose of the formations of the state’s military organization, trends in the theory and practice of military affairs, together with the science of Russia, to provide defense industry enterprises with clear objectives for developing modern means of destruction and control.” In addition, one of the main tasks of the EGV being formed will be the testing of new weapons and the development of proposals for their use.

Including formation in the army and on navy new organizational and staff structures of governing bodies, units and formations that are new weapon will apply.

The fundamental difference between the EGW and previous research systems is that, according to the authors, in the process of developing new types of weapons "combat units will be left alone." And with the participation of the military-industrial complex and the Ministry of Defense, a structure will be created, “which would be able to run through mock-ups and introduce finished products into the troops.”

The author of the idea is the former chief of the General Staff of the Ground Forces, Lieutenant General Sergei Skokov, who in the summer of 2011, together with some other military leaders, filed a report on his early dismissal from military service. NG (see number from 05.11.11) and a number of media then wrote that the early dismissal of the generals was due to their disagreement with the steps to reform the army, which was carried out by the former leadership of the Defense Ministry, headed by Anatoly Serdyukov. Now, it seems, the ideas of General Skokov were listened to both in the government and in the army. These proposals are supported by reputable military experts.

The President of the Academy of Military Sciences of the Russian Federation, Army General Makhmut Gareyev, believes that the EGW is “a new look at the ways of interaction between the manufacturer and the customer of promising models of weapons and equipment, as well as the military community. As a result of the organization of this association, the defense industry complex can fully disclose its capabilities by interacting with the special structure of the Ministry of Defense (meaning EGW. - “NG”), which will not be burdened with any other tasks besides the experimental research functions. ”

The former head of the military industrial complex under the government, the chairman of the board of directors of a number of large high-tech industrial holdings producing modern weapons, Vladislav Putilin is convinced that "it is unpromising to solve the problem of creating sophisticated modern technical systems for the Armed Forces without taking into account the new forms and methods of combat operations decisions, new management procedures, where these systems are supposed to be used. ” To eliminate this contradiction, in his opinion, can be EGV.

According to the head of the interdepartmental commission of the military-industrial complex under the government of General of the Army Alexander Starovoitov, the creation of the EGV “will allow relieving the burden of unusual tasks from the combat units, thus preserving their constant readiness to solve tasks for the intended purpose. Starovoitov in this regard points to the existing problems associated with testing in the troops of the Unified Command and Control System at the tactical level (ESU TZ). His commission last fall checked the state of development of the ESU TZ. This system should have been put into service three years ago. But it is still being improved and developed, since many problems have not been eliminated. Analyzing them, Starovoitov concludes that “a significant negative impact on the creation of the ESU TK is exerted by the insufficient level of its military-scientific and scientific-technical support, the lack of effective mechanisms for determining the quality of development and its implementation in combat practice, as close as possible to the real conditions of its operation in the army. NG once wrote (see number from 12.11.12) that during the Kavkaz-2012 exercises, soldiers of the “digital brigade” who tried to use the ESU TK, who served only 1 – 2 of the month, were simply unable to exploit sophisticated equipment and combat technique. Nevertheless, this system was somehow investigated and evaluated.

It seems that some ideas of creating an experimental group of troops in the army and navy are already being put into practice. As the Deputy Minister of Defense of Russia, Colonel-General Oleg Ostapenko, said recently, the Advanced Military Research and Development System (SPVIIR) is being created in the military department under his leadership. The structure of SPVIIR will include the Main Directorate for Research and Development and Technological Support of Advanced Technologies (Innovative Research), the Information and Analytical Center for Information Collection, Analysis and Preparation, and the Coordination and Expert Department for Research and Development. In addition, it includes the Main Research and Testing Center for Robotics of the Ministry of Defense, as well as the Research Center "Bureau of Defense Solutions", located in Moscow, and the regional department of innovative developments in St. Petersburg.

In the future, it is planned to create similar regional SPVIIR structures in Yekaterinburg, Novosibirsk and Vladivostok.

Corresponding Member of the Academy of Military Sciences, Colonel Edward Rodyukov believes that the framework of SPVIIR will develop "innovative research in the field of defense." And the EGV will be the “proving ground, a kind of bridge between the Ministry of Defense and the enterprises of the Russian defense and science, where these ideas will be brought to mind, tested on the experimental base of the grouping of troops and then put into production”.

Ctrl Enter
Noticed oshЫbku Highlight text and press. Ctrl + Enter
We are
Military reform as an integral part of the security concept of the Russian Federation: Systematic dynamic assessmentDARPA in Russian is not DARPA at all. Instead of a breakthrough technology agency, another bureaucratic structure is being created.
Military Reviewin Yandex News
Military Reviewin Google News
113 comments
Information
Dear reader, to leave comments on the publication, you must to register.