"A military conflict with China is absolutely ruled out" 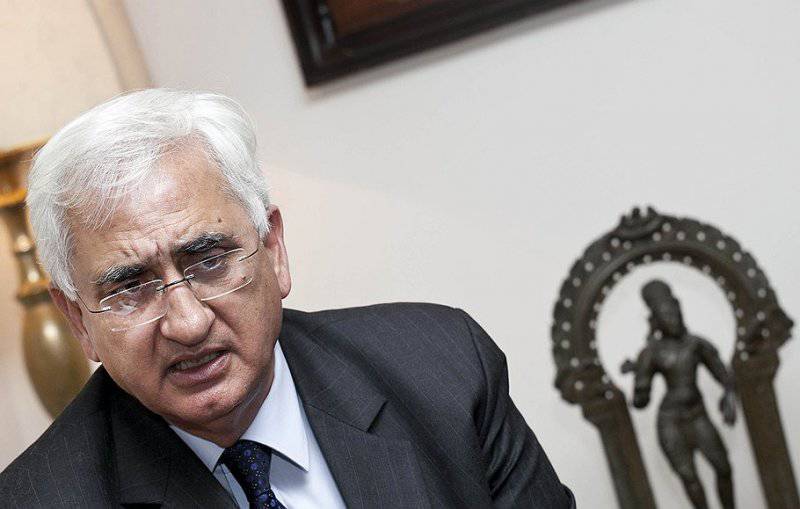 Indian Foreign Minister Salman Khurshid paid a working visit to Moscow. The main event during the trip was his meeting with the Deputy Prime Minister of the Russian Federation, Dmitry Rogozin, co-chairman of the intergovernmental commission on trade, economic, scientific, technological and cultural cooperation. On the eve of the talks, SALMAN KHURSHID, co-chairman of the commission from the Indian side, spoke about promising projects of bilateral cooperation to Kommersant correspondent SERGEY STROKAN.


- Mr. Minister, this is your first visit to Russia. What do you expect from meetings in Moscow?

- There are deep, strong and extensive relations between Russia and India. The strategic partnership provides for holding annual meetings at the top, the content of which is provided by the Russian-Indian intergovernmental commission on trade, economic, scientific, technological and cultural cooperation. For the development of relations, it is necessary to do a huge amount of preparatory work on the whole range of issues. In particular, we intend to deal with this in Moscow.

“But lately, several irritants have arisen in our relations related to the delayed transfer of the aircraft carrier Vikramaditya to the Indian side, revocation of licenses from AFK Sistema in India, disagreements on nuclear cooperation within the framework of the Kudankulam NPP project. Can we say that in the relations of the two countries there are no problems?

- There are no problems where they do nothing. But as relations develop, inevitably questions arise that require a joint solution. We worked closely on issues that have been discussed in the press over the past year and which could be a source of concern. Today we have no feeling that there are problems that we cannot solve. We are waiting for the transfer of the aircraft carrier Vikramaditya to us. As for the Kudankulam NPP, final preparations are underway to launch its first power unit. The second power unit is ready for operation at 90%. In addition, negotiations are underway to build the third and fourth power units.

- In Russia today there are voices calling into question the tendering mechanism for concluding deals in the military-technical sphere. Critics talk about their opacity, the corruption component. Is it time to admit that tenders in the field of military-technical cooperation have become obsolete?

- In a free society there are always different opinions. Some of them are very superficial, some are infected with distrust and cynicism, so do not spend too much time discussing them.

But let me answer you on the merits. We in India, as we move towards a more open market economy, have accumulated great management experience. In the course of this process, a tendering mechanism was formed that implements the principle of free competition in obtaining government contracts.

In this case, the fate of a transaction must always be decided in a specific context. In some cases, transactions are concluded in the framework of direct interstate agreements, in others - on the basis of tenders. But I do not think that in the case of tenders for Russian companies in India any problems should arise. Many of them successfully participate in tenders.

- That is, interstate agreements can not replace tenders?

- There are strategic areas where interstate agreements are still important. But in open societies such as ours, it is important that there is transparency and public control provided by tenders.

- India offered Russia to take part in the implementation of the ambitious project for the construction of the Delhi-Mumbai industrial corridor. How important are Russian investments to you?

- The concept of the Delhi-Mumbai industrial corridor, in which Japan is largely involved, involves connecting many states to it. Implementation of the project by a single state is impossible, so we turned to Russia and we hope that it will respond. After all, Russia has a great experience in India.

- One of the key areas of cooperation is energy. India is seeking Russia's participation in the Sakhalin-3 project; in addition, ONGC Videsh Limited is interested in developing Siberian oil fields. How do you see the prospects for such cooperation?

- The details should be discussed by technical experts, but I can confirm: ONGC Videsh Limited is really interested in coming to Siberia and the Arctic. This is one of the promising areas of investment and cooperation.

- In recent weeks, relations between India and China have worsened due to a long-standing territorial dispute. The current situation is even compared with the year 1962, when an armed conflict broke out. How do you intend to solve the problem, given that Beijing is tough and does not intend to give in?

“I don’t think we should talk about it in terms of" softness "or" hardness. " This is a local, private matter that should not adversely affect the whole complex of Indian-Chinese relations. The differences are associated with different visions of the sides of the so-called Line of Control. So, being aware of the huge public attention to this issue, we should not artificially escalate the situation. The issue must be resolved through negotiations.

- So you exclude the possibility of armed conflict?

Ctrl Enter
Noticed a mistake Highlight text and press. Ctrl + Enter
We are
Narendra Modi: India has always perceived Russia as a close friendNikolay Silaev, Andrei Sushentsov: Georgia after the elections and prospects for Russian-Georgian relations
61 comment
Information
Dear reader, to leave comments on the publication, you must to register.