Moscow turns to the East


What good did the Arab Spring bring to the Middle East? Nothing. The region is slowly degrading. In Tunisia, public discontent is gaining momentum, civil war continues in Libya, rallies and street battles with new authorities are constantly going on in Egypt, Syria has become a proving ground for city battles between the state and mercenary terrorist groups, three million Syrians have left their homes, one million - the country. Behind all these cataclysms are specific customer owners and their puppet performers.

The meaning of the processes that are taking place today in the Middle East as a whole and in Syria in particular should be viewed in the context of the developing confrontation between the two geopolitical systems - the West and the East.

Master class games on the contradictions

In contrast to the East, the West has a clear philosophical basis for action, which is based on the classics of the Western geopolitical school. One of its representatives, Nicholas Spykmen, says: "He who controls Eurasia controls the destinies of the whole world." But for this you need to control all the oil, all strategic communications and key regions. The task of establishing full control over oil and gas fields and transport communications in the Greater Middle East and Central Asia has become a fundamental priority in the strategy of the United States and the North Atlantic Alliance. 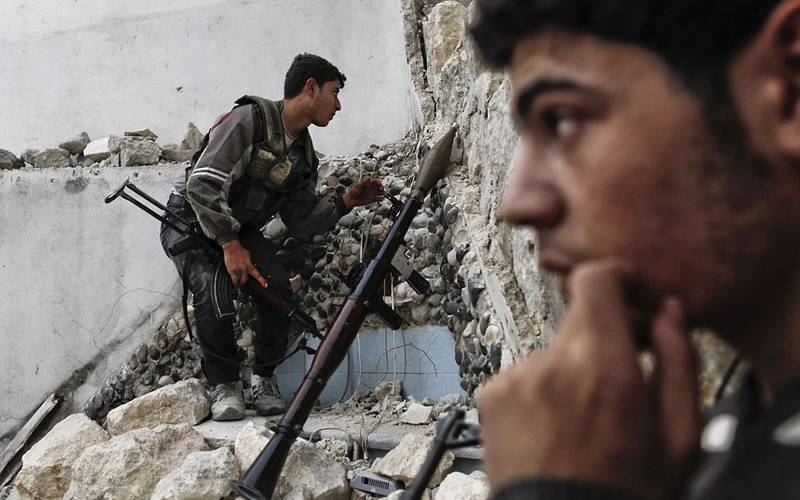 But the main goals are China and Russia. Ex-Secretary of State Hillary Clinton explained in detail the “strategic turn” of Washington towards the Asia-Pacific region, which “logically represents part of our global efforts to secure and strengthen US leadership.” Americans will resist the attempts of any country or coalition to dominate Eurasian territory. Therefore, Russia with its Eurasian project and China are the main targets of the aggressive aspirations of the United States.

Playing on the contradictions of the Asian and Pacific countries and creating them artificially, Washington for a long time ensures its presence in this region. Over the past decades, in the Asia-Pacific region, the United States has been able to acquire new partners in India, Vietnam, Singapore, and Indonesia. Skillfully scaring these countries with the growing power of China and the nuclear threat posed by North Korea, the Americans are increasing their military-technical presence in these states.

With respect to Beijing, America uses the Anaconda Loop plan, which is as follows: surround the PRC with unfriendly neighbors, take control of all sea and land communication nodes, oust from Africa and the Greater Middle East, leave without energy reserves and strangle with economic sanctions. And at the end to launch Islamic extremists into the Uygur Autonomous Region and Tibet for the sake of "democratization", and in fact - the separation of these areas from Beijing.

To do this, urgently needed Islamic revolutions in the Arab Maghreb and Mashek.

General Wesley Clark writes in his book that as early as October 2001, the United States had a plan for five years to settle scores with seven countries, namely Iran, Pakistan, Uzbekistan, Venezuela, Syria, Sudan and North Korea. It should be noted that at that time Afghanistan was bombed and decided to start a war against Iraq.

In 2006, retired lieutenant colonel Ralph Peters, who was on the staff of the office of the deputy chief of intelligence and was responsible for developing ways of waging future wars, called the borders of the New Middle East bloody, unfair, and in need of redistribution. And Hillary Clinton recently hinted that 27 new states should be formed in this region.

Back in 2009, the Pentagon’s official documents preserved scenarios for further invasions by the Americans. But modern information technology has made its own adjustments. There was a change in tactics of foreign policy. Under George W. Bush (adviser to Kissinger), the United States, like Ancient Rome, seized the country, leaving its legions in it to pacify and intimidate the aborigines. Today, this scheme does not work. Under the peacemaker Obama (advisor to Brzezinski), Roman tactics gave way to Lawrence of Arabia tactics, the principle of which says: “Make the Arabs kill the Arabs for the interests of Britain.” And now the Arab world with the filing of the Anglo-American forces engaged in self-destruction.

Turkey, Saudi Arabia and Qatar are at the forefront of fomenting religious and ethnic hatred. Calls to end the Syrian regime or destroy all the Christian churches in the region are from Riyadh. Turkey, having formed the Syrian opposition and supporting terrorist activities on the territory of Syria, is essentially engaged in state banditry under the auspices of Washington. After the seizure of a settlement, Turkish mercenaries dismantle and remove machine tools from factories and plants, raw materials and finished products. Orders are being fulfilled for the robbery of museums and the removal of antiquities from Syria. This can have dire consequences for Turkey. A shocking statement was made by the resigning head of the Turkish Military Academy, Admiral Turker Ertürk: "Syria is inundated with terrorists of all stripes, and Al Qaeda, which has already committed several major terrorist attacks in this country, supports the US government."

The terrorist attacks in Damascus with the use of suicide bombers show that the West and its Arab allies decided to repeat the “Salvadoran scenario” in Syria, making a bet on replacing the opposition with terrorist groups. The operation to destabilize El Salvador with the help of suicide bombers was led by John Negroponte, who later became the US ambassador to Iraq, and the future US representative in Syria, Robert Ford. The observer of the British newspaper The Daily Telegraf, Peter Oborn, said that lately Washington and London have stepped up hidden cooperation with al-Qaeda in a joint struggle against the Syrian authorities. Obviously, Americans are trying to turn Al-Qaida into the official government structure in Syria.

Salafis play a dominant role in terrorist activities in Syrian territory. Their method of struggle brings fear and horror to the entire local population - Christians, Shiites, Alawites, and Sunnis. The country is shocked by the atrocities of terrorists who destroy and desecrate Christian churches and mosques. Today, Syria has become the focus of criminal and terrorist international - people from Afghanistan, Turkey, Qatar, Saudi Arabia, Azerbaijan, Central Asia, the North Caucasus and even the United States. In each detachment, the Syrians make up only two or three percent, the leaders of the terrorist groups are foreigners. Their task is to destroy the borders from Morocco to the Uygur autonomy of China for the free movement of terrorist groups. This wave must pass through Syria to Iran, then to the Caucasus and the Volga region (one branch) and through conquered Afghanistan to Pakistan and Central Asia. The ultimate goal is China.

The decision of Moscow and Beijing to vote against the resolution of the UN Security Council on Syria is justified and reasonable. The position of Russian President Vladimir Putin is the result of our country's disappointment in the policies of the United States and Europe. Moscow turns east. The SCO, BRICS, the Eurasian Union, APEC - the main geopolitical vector of Russia. It is here that a new model of the world is being formed - moral and spiritual, and therefore promising and safe.

Ctrl Enter
Noticed a mistake Highlight text and press. Ctrl + Enter
We are
Interview of President Bashar Al-Assad to the Sunday Times newspaperAlbert Pirmanov. Help, save! ...
70 comments
Information
Dear reader, to leave comments on the publication, you must to register.