April 30 2013
109
The Russian Defense Ministry has decided on the delivery time for the combat units of the new double-barreled anti-tank hand-held grenade launchers - the RPG-30 "Hook", created in the Basalt research and production association. In 2009, the new grenade launcher successfully passed a series of state tests, after which it was decided to supply these grenade launchers to the armament of the Russian army. Production of new RPGs in the troops will begin in November 2013 year. According to the newspaper "Izvestia", the military purchased 1000 grenade launchers. The amount of the contract for the supply of RPG-30 (was concluded at the end of 2012) amounted to 83 million rubles, which means the cost of each grenade launcher is 83 thousand rubles. The first thousand new RPGs will be transferred to the district warehouses of the Central and Southern military districts, from where grenade launchers will be transferred to brigades.


The RPG-30 "Hook" anti-tank grenade launcher (GRAU 7P53 index) is weapon single use, two-pipe. In a cylindrical container of larger diameter is 105-mm tandem cumulative anti-tank grenade PG-30. Below is a smaller container in which the target simulator is located. Its purpose is to activate, when approaching the target, the means of active defense of the enemy and ensuring conditions under which the main tandem ammunition can easily destroy the target.

The new Russian RPG-30 “Hook” grenade launcher surpasses its predecessor RPG-29 “Vampire” in compactness - slightly longer than the 1 meter, against the Vampire’s 2 meters. At the same time, the RPG-29 has proven itself quite well in present-day military conflicts, for example, in Syria, where it has already repeatedly demonstrated tremendous penetrating power. The RPG-22 and RPG-26 grenade launchers that are in service with the Russian army cost the budget about 30 thousand rubles each. A “hook” costs 2,5 twice as much, but this is a worthwhile waste of money. 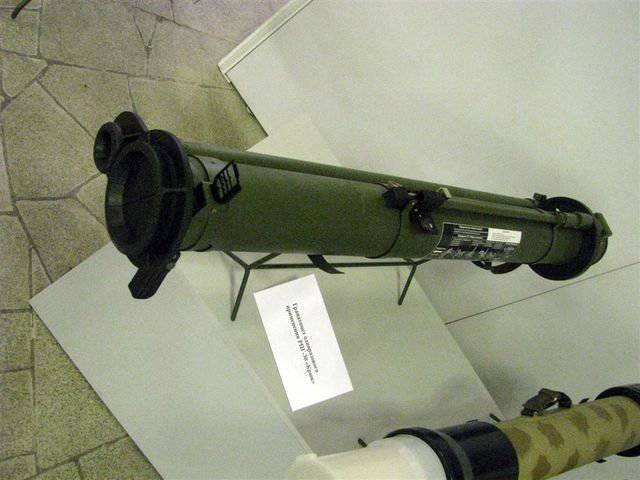 The army notes that the transition to the new RPG-30 grenade launcher should not be accompanied by any difficulties for personnel. Of course, the new grenade launcher, due to the presence of 2-x barrels, requires a special grip and at first it may seem that it is inconvenient to hold it, but soldiers get used to this particular feature after a couple of lessons. The peculiarity of the grenade launcher is that the simulator in it is quite fragile, which means that the RPG-30 must be used quite cautiously, said an officer in the service of the missile-artillery armament of the Southern Military District.

According to Vitaly Moiseyev, the editor of the site "Courage-2004", the acquisition of the latest Russian grenade launcher is another step in the continuation of the eternal confrontation between defense and attack techniques. Russian armed forces must be prepared to fight any adversary that has outdated or, on the contrary, high-tech weapons. It is possible that in the very near future the number of countries that equip their armored vehicles with active protection complexes will multiply. In this regard, the presence of the Russian military of such a weapon as the RPG-30 "Hook" will be in place.

To the development of a new means of destruction tanks and enemy armored vehicles at the state-owned Bazalt research and production enterprise began in the mid-2000s. The latest RPG-30 "Hook" was developed to defeat all types of armed, as well as promising models of armored vehicles, as well as unarmored targets, enemy manpower and protected fortifications and firing points on the battlefield. This anti-tank weapon system is able to overcome all possible complexes of active protection (KAZ) of tanks and other armored vehicles that were developed by the beginning of the XNUMXst century in various countries of the world.

RPG-30 grenade launcher, of course, refers to the new means of dealing with the enemy's armored vehicles. Already for a long time it has been known to use a special type of armor against warheads with a shaped charge. This armor is called active-reactive and consists of exploding plates that form a common detonation chain. At the moment of impact of the projectile on the plate detonation occurs, which affects the cumulative jet of charge. At this point, the jet deviates from the position of the primary contact with the target's armor, which significantly reduces the effect of its impact.

The reciprocal step on the part of the attacker was the use of tandem rocket ammunition. The warhead of such projectiles consists of 2-x parts: the initial charge, which acts as a detonator plates reactive armor and the main charge, which is triggered after a specified period of time at a time when the target is already deprived of dynamic protection.

However, the designers found control and on tandem ammunition. The next step was the development of active protection systems. As an example of such systems, we can cite the well-known Russian Arena, the widely publicized Israeli Trophy system, as well as the promising American development FCLAS. These systems detect a shot approaching the tank and launch a projectile to meet with it, seeking to destroy or undermine the anti-tank ammunition with a shock or explosive impact. For these purposes, dense inert metal elements can be used, which at the time of the explosion scatter in the air like microshape. It is assumed that this kind of protection have a limited radius of destruction and can not harm their own troops located nearby. 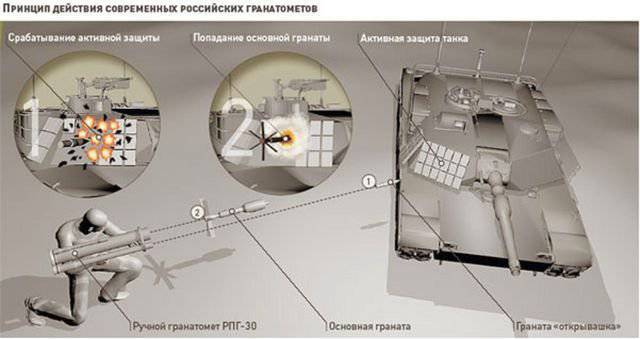 The RPG-30 grenade launcher is equipped with 105-mm tandem ammunition, which is able to penetrate steel armor with a thickness more than 600-mm, which is behind the dynamic protection. The main distinguishing feature of the grenade launcher is the use of the 2 pipe, from which the shot is fired with a smaller-caliber rocket trap. This rocket trap is a part of a real rocket, which is ahead of the main warhead as it approaches the target. The essence of this idea is that the tank's active defense system destroys the missile simulator and cannot immediately hit the second, real threat. According to Russian experts, a known KAZ is able to destroy the second target in a minimum time interval, which is equal to 0,2-0,4 s. At the same time, the PG-30 grenade approaches the target in less time, which leaves all active protection complexes out of work.

The RPG-30 “Hook” grenade launcher was created using a bicoliber design, unique and innovative for hand-held anti-tank weapons, using a target simulator. Structurally, it is a 2-e parallel tubes of different diameters in which missiles are placed. The ends of both tubes are covered with petal rubber membranes, which collapse at the moment of the shot. The grenade launcher is equipped with a single aiming device and trigger mechanism. RPG-30 is equipped with a folding mechanical sight. Bringing a grenade launcher into a firing position is made by raising the scope of the sight upwards and raising the trigger mechanism.

In the larger container is the main 105-mm tandem cumulative reactive anti-tank grenade PG-30, which largely replicates the similar ammunition for the earlier version of the RPG-29 "Vampire" grenade launcher. This grenade launcher managed to prove itself well enough with the defeat of the Israeli Merkava tanks during the second Lebanon war, as well as with the American МХNUMXА1 Abrams and British Challenger 2 during the second Iraqi campaign. In a smaller container there is a missile-simulator of the target. It has an identical trajectory with the main grenade, as well as a radar signature. By means of active protection of a tank, it is defined as an attacking rocket grenade tank and triggers the system. 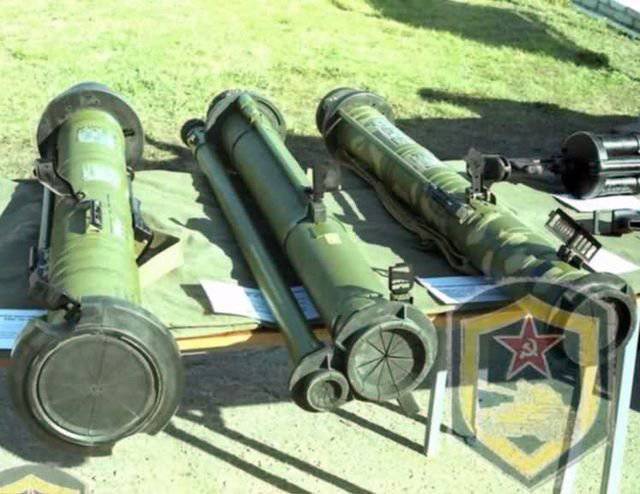 Being at a distance of a shot (sighting range 200 meters) to the enemy's armored object, the grenade thrower aims and makes a shot from the Hook RPG-30. At the moment of the shot, the propelling charges of both shells are triggered. In this case, the target simulator leaves the barrel first, after it, with a slight delay, the main ammunition PG-30 starts. Modern KAZ tanks, firing on a simulator projectile, are not able to react to the main anti-tank grenade following it. As a result, the main cumulative ammunition pierces the main layer of armor, affects the equipment and the crew inside the tank, causing a fire and exploding ammunition.