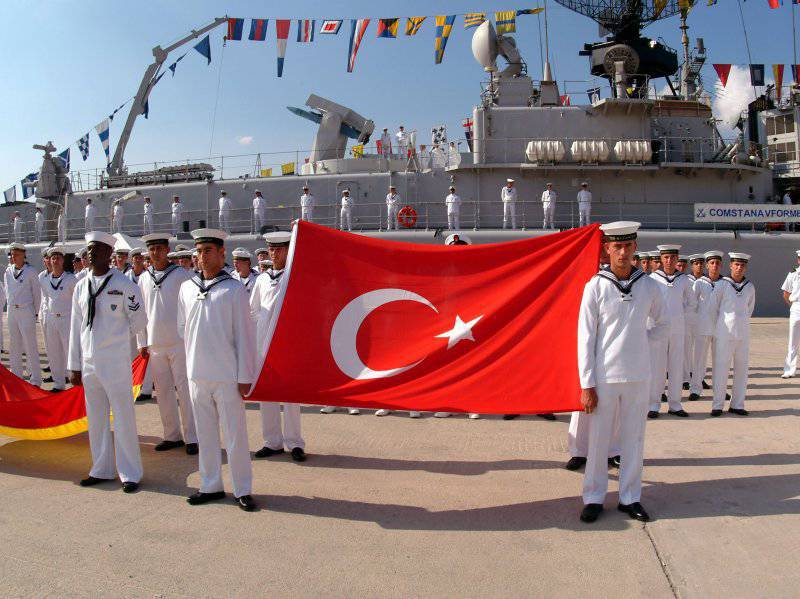 The benefits of joint exercises

... on the calendar is October 1992 of the year. In the Aegean Sea, a united squadron of NATO naval forces is moving. Navigation fires of ships cut through the darkness of the southern night - crews rest from the intense day watch. They do not sleep only on the Saratoga aircraft carrier - American sailors are studying the automated guidance system of the Mk.95 anti-aircraft missiles (a key element of the self-defense system "Sea Sparrow"). Allied ships are used as "targets" - naturally, the allies do not know about it and sleep peacefully, swaying on their bunks.

The Americans deployed a fire control radar, alternately taking on the fly, each ship of the Allied squadron. Target taken on escort, air defense missile system ready for shooting! OK, the exercise is done perfectly, now carefully ... no, I said Carefully ... press the cancel button - and turn the radar in the other direction.

A sleepy finger presses the wrong key - the “Arm and tune” command comes to the control panel for rocket shooting. With a sharp clang the wall of the launch container flies away, two anti-aircraft missiles, driven by the radar beam Mk.95, rush towards the target. Who is the target? Oh shit, it's Turkish destroyer Muavenet! 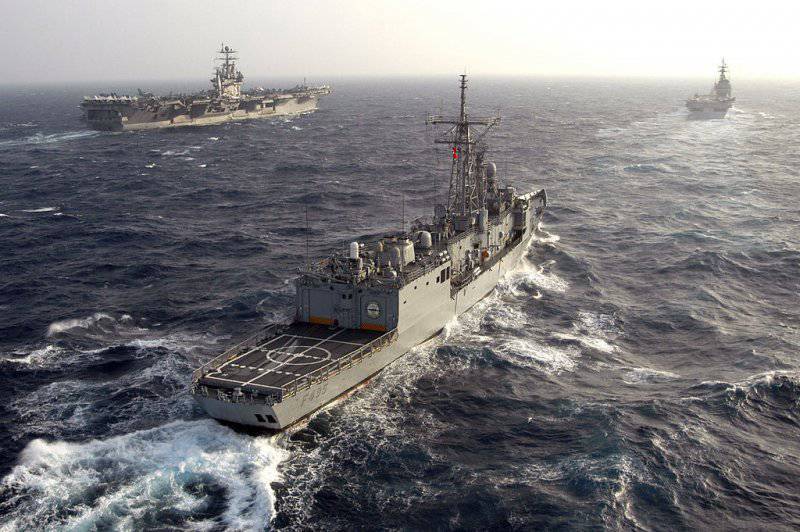 5 dead, 22 wounded - a Turkish warship was shot by the allies at the exercises as a rusty target. A terrible incident. Turks offended look at their suzerain. Uncle Sam presents Turkey with a new ship - instead of the beaten Muavenet (the old galosh, the former American destroyer of the Second World War), Turkish sailors receive the next decommissioned frigate of the US Navy.

Despite its regional status, the Turkish fleet is a well-balanced strike force - a strong argument in a troubled region of the Middle East. Rich traditions (the Ottoman fleet conducts its history from the XIV century). Bright victories (worth the memorable mayhem of the Anglo-French squadron while trying to break through the Dardanelles, 1915 year). Modern technology (new ships and upgraded "second hand" from leading US and European shipbuilders). And most importantly - the increased attention paid by the leadership of Turkey to this type of armed forces. All this has turned the Turkish Navy into the most formidable player in the eastern Mediterranean.

Readers will probably be interested in comparing the Turkish fleet with its obvious rival - the Russian Black Sea fleet. How great are the capabilities of both opponents? Which of the fleets of the two powers is most effective in conducting operations on the expanses of the Mediterranean and Black Seas? We will try to briefly answer these questions.

Nachem, perhaps, from the submarine fleet.

Multi-purpose diesel-electric boats of German design, one of the most common diesel-electric submarines in the world. Submerged displacement - 1285 ... 1600 tons (depending on version). Full stroke - 22 node. Snorkel range is 8000 miles at cruising speed of 10 knots. The range of travel on batteries - 400 miles at speed 4 node. The maximum immersion depth is 500 meters. Crew 30 man. 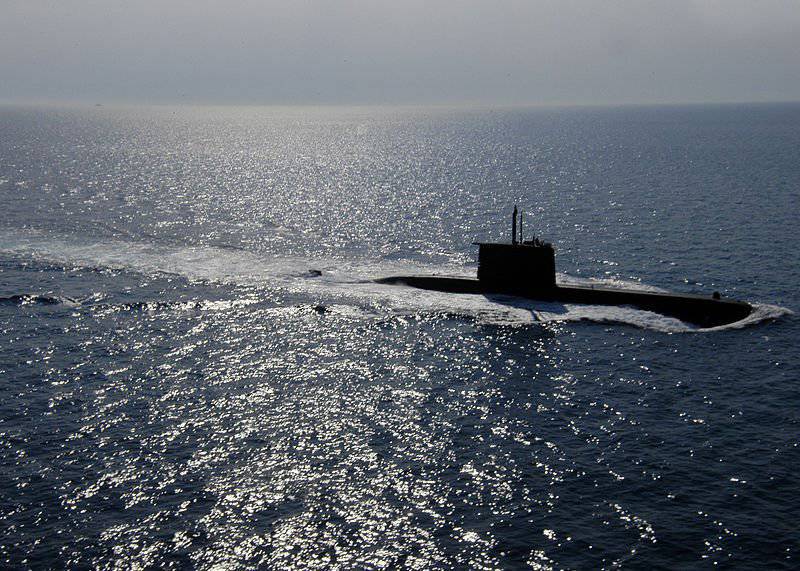 Usually, submarines unfairly stand at the very end of the list of ships - after all the destroyers and frigates. In reality, the boats are the combat core of the fleet, the most powerful and deadly ships capable of solving a wide range of tasks - from disrupting naval communications to conducting special missions: observation and reconnaissance, landing sabotage groups and air correctors, breaking the blockade, delivering special cargo.

The Turkish Navy is armed with 14 submarines - the equipment was purchased in Germany from 1976 to 2007 a year. The last four boats, acquired in the new century, the “Gur” type are a new modification of the Type 209T2 / 1400. In 2011, a contract was signed for the supply of another batch of six Type 214 submarines equipped with an AIP air-independent propulsion system based on hydrogen fuel cells. 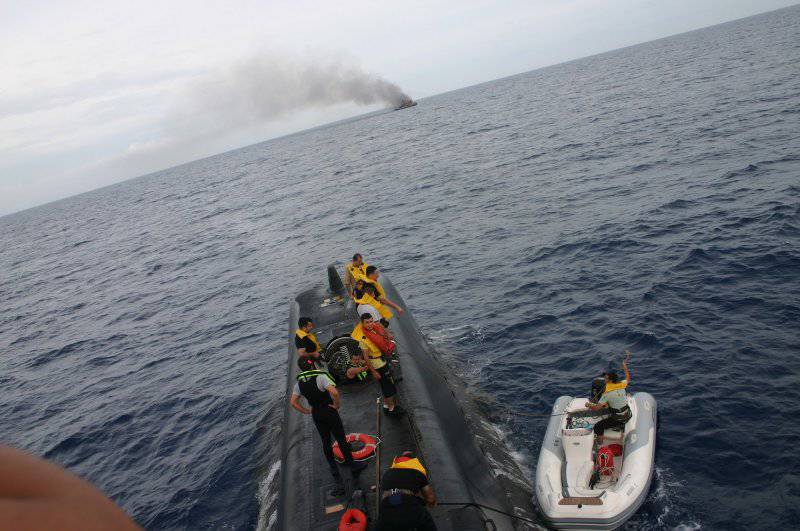 Surface forces of the Turkish Navy

The total displacement is 4200 tons. Crew 220 man. Full speed 30 knots. The stock of fuel on board provides 5000 miles cruising range at economic speeds of 18 knots. 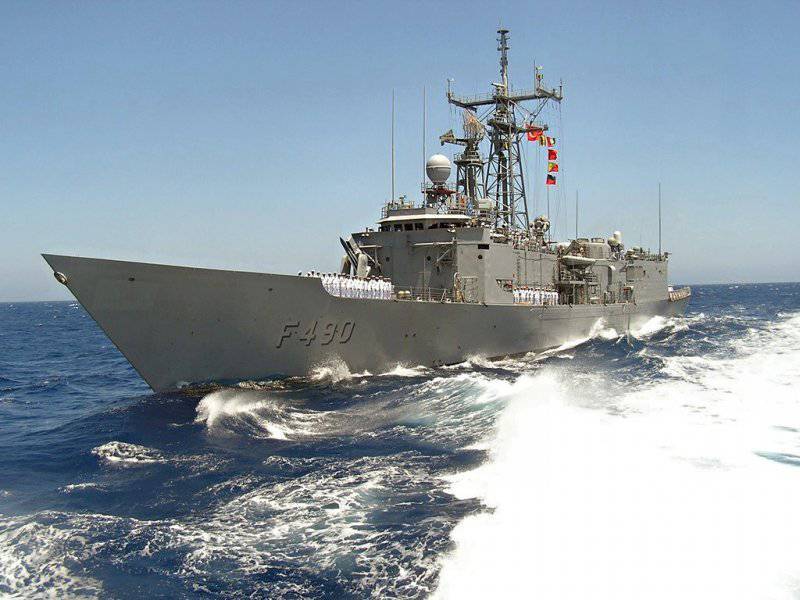 Multi-purpose frigates with enhanced air defense. All 8 units are former American ships of the Oliver Hazard Perry type, transferred to the Turkish Navy under a military assistance program. We have upgraded with the installation of new types of weapons (bow MUP.MN.41 with ESSM missiles) and radioelectronic systems (BIUS of its own design, new MSA Mk.92). A system appeared on the stern helipad to facilitate the landing and towing of an ASIST helicopter.

By the way, the American frigates "Oliver H. Perry" have never been distinguished by high combat characteristics. During its service, "Perry" twice became the victim of actions by the enemy. It is difficult to say how much the air defense capabilities of modernized Turkish frigates have increased, however, 32 modern Evolved Sea Sparrow Missle anti-aircraft missiles (ESSM), capable of maneuvering with 50-multiple overload at 4 speed, should significantly increase the level of protection of ships from air attacks. 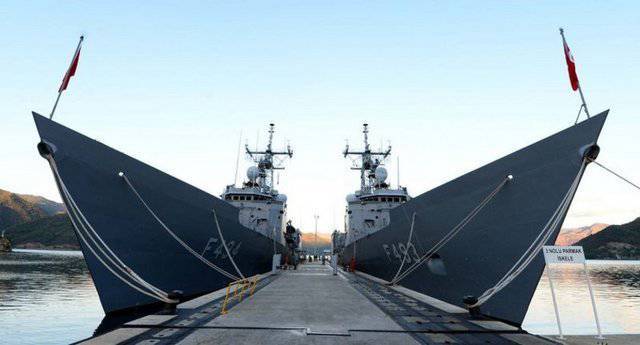 There are no direct competitors for the Turkish frigates in the Black Sea Fleet. The patrol ships "Sharp-witted" (project 61) and "Inquisitive" (draft 1135) are designed to solve completely different tasks. The Russian patrol ships (frigates, according to NATO classification) have a completely different composition of armaments, directed towards strengthening the anti-submarine defense.
In terms of their air defense capabilities, the Turkish G-type frigates are close to the Moskva missile cruiser, however, their strike power is simply incomparable with that of the cruiser.

The total displacement is 3350 tons. Crew 180 man. Full speed 32 knot. The stock of fuel on board provides 4000 miles cruising range at economic speeds of 18 knots. 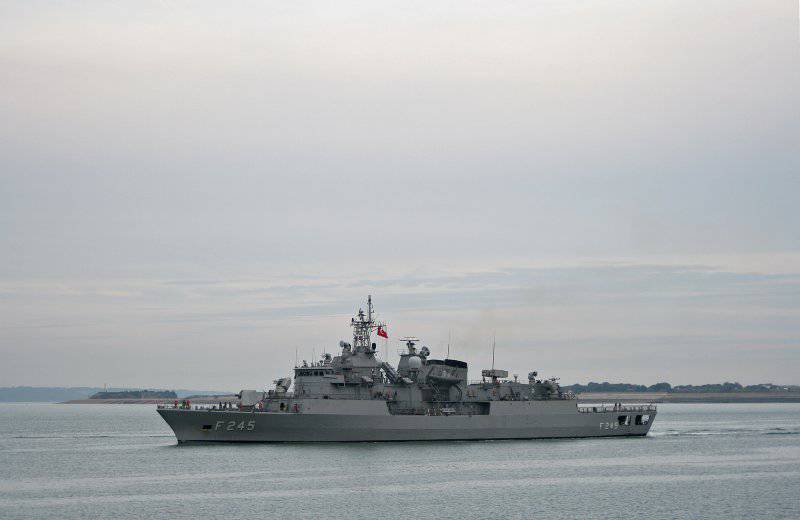 Four German frigates built according to the MEKO project (a family of warships developed by Blohm & Voss) especially for the Turkish Navy. The last two ships of the series, Salih-Reis and Kemal-Reis, received a modern vertical launch unit Mk.41 with the aforementioned ESSM missiles instead of the Sea Sparrow box-type launcher.

Frigates of the "Movenet" type

The total displacement is 4200 tons. Crew 250 man. Full speed 27 knots. The stock of fuel on board provides 4000 miles cruising range at economic speeds of 20 knots. 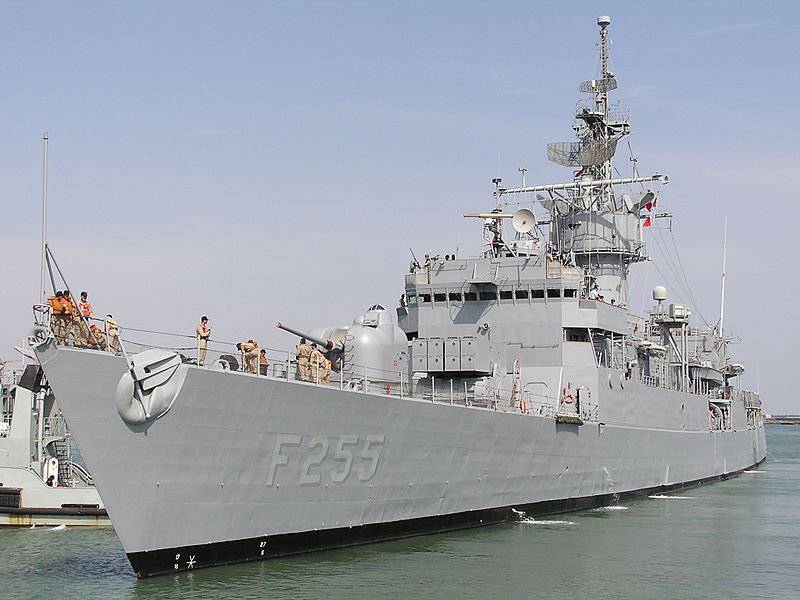 Old American Knox type frigates built at the beginning of the 1970s. Turkey received about a dozen “Knoxes” in various conditions - from relatively combat-ready units to dismantled corps and a pile of trash for cannibalization. To date, as part of the Turkish Navy, there are still three frigates of this type. Suitable for patrols and, to a limited extent, for antisubmarine missions.

A notable feature of Knox-type frigates is the absence of any coherent air defense system. The anti-aircraft capabilities of the ship are limited to the only ZAL "Phalanx". 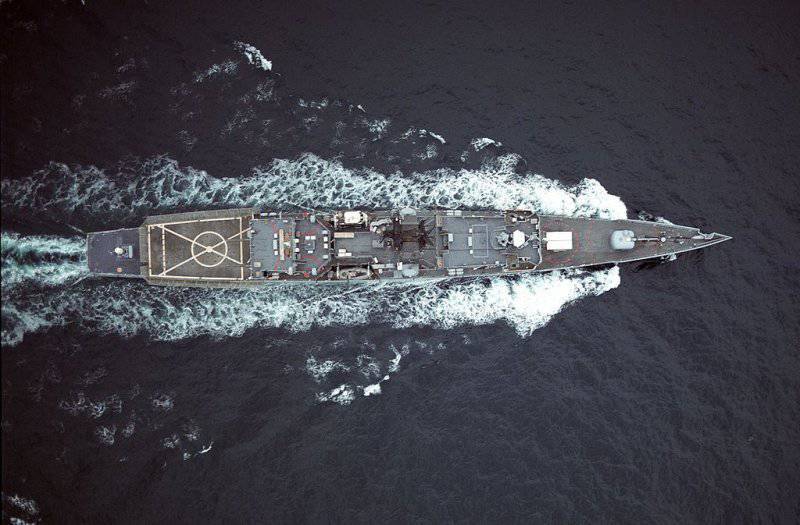 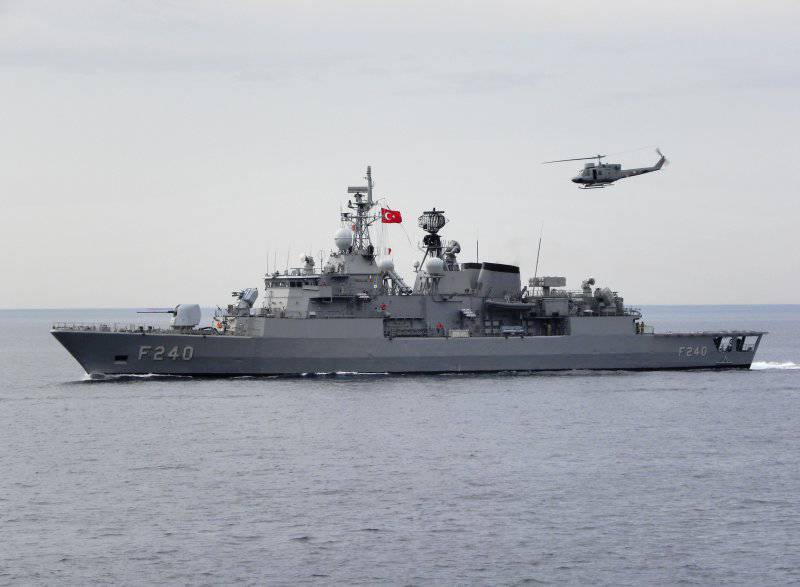 Regular representatives of the German project MEKO previous generation. Four frigates of the Yavuz type were built during the 1985-1989 period. Once were the most modern ships of the Turkish Navy. Currently outdated and need to be replaced. 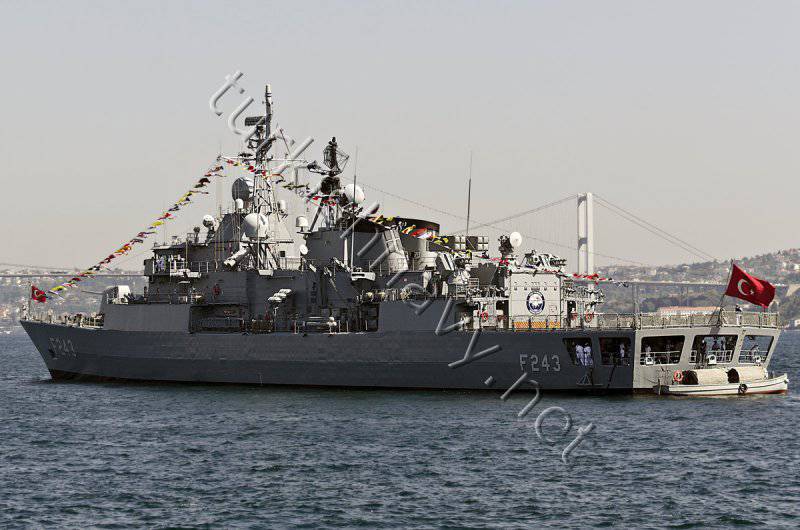 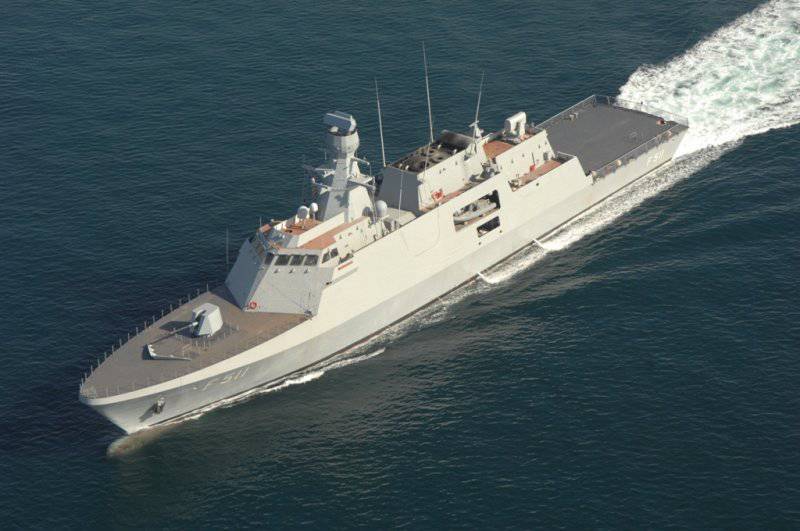 The first attempt of Turkey to create a modern warship "on its own". Quotes are not accidental - German designs are widely used in the construction of corvettes, and all weapons are represented by American designs. Nevertheless, corvettes of this type are built on Istanbul shipyards, more than 50 related Turkish companies are involved in the construction, and all electronic systems of ships are integrated into the combat information and control system GENESIS of its own production.

To date, the 2 corvette for the Turkish naval forces (in the line - one) has been built on the MILGEM project (Milli Gemi, which means “national ship”). Six more ships of this type are under construction, with a total planned quantity of 12 units. The last four corvettes are planned to be built on a modified project with the installation of the latest air defense system based on the OHR and ESSM missiles.

Admittedly, the Turkish shipbuilders managed to create a fairly successful warship, with combat capabilities acceptable for its size. In the future, the delivery of MILGEM corvettes for export is possible. 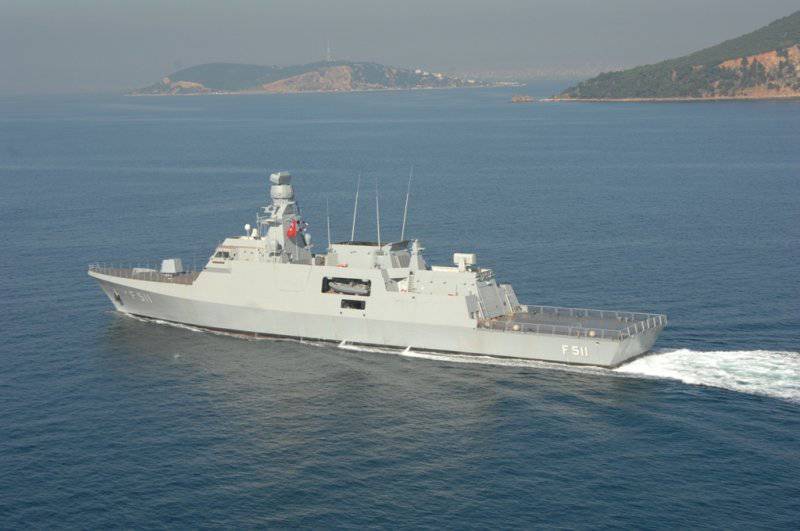 In addition to frigates and large multi-purpose corvettes, the Turkish Navy includes:

- 13 naval tankers for the delivery of fuel, fresh water and other liquids;

- 3 rescue vessel designed to evacuate crews from submarines lying on the ground, as well as to supply air, electricity and rescue equipment to emergency submarines (surface ships) and provide emergency medical care to victims. 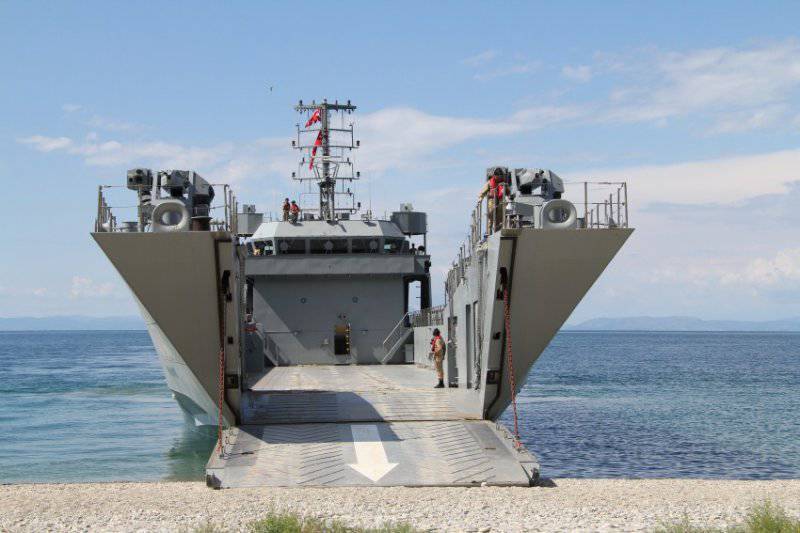 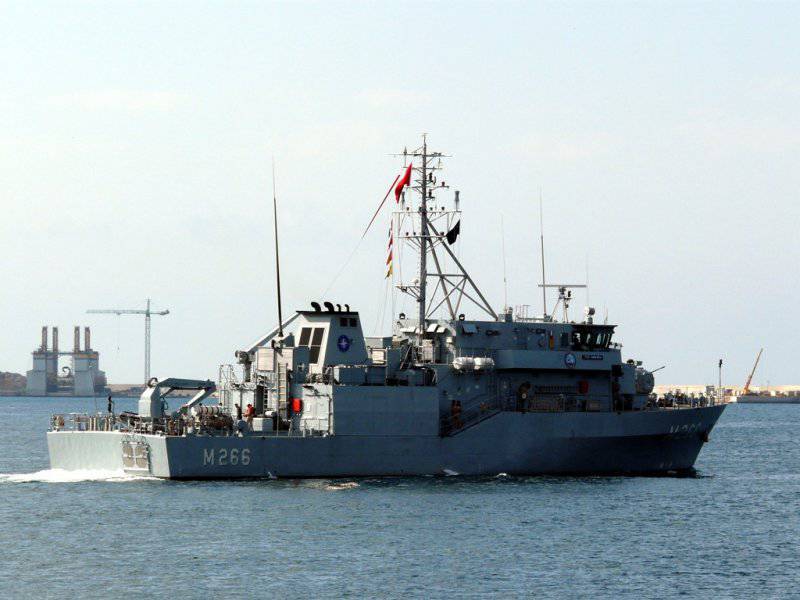 - 50 anti-submarine and multi-purpose helicopters (heavy machines of the Sikorsky company and various modifications of the Iroquois helicopters built by the Italian company Augusta).

In the near future, the Turkish admirals set out for themselves three important goals:

- create your own air defense destroyer, comparable in capabilities with the American Orly Berk or at least with the European frigate Horizon. Work on the project, which received the TF2000 code, has been going on since 2006.

- to introduce into the Navy a universal amphibious assault ship helicopter, similar to the MTC UDKV tactical technical characteristics. It remains only to guess what the Turks needed a ship of this class - all the interests of Turkey lie within a few hours of travel from Istanbul. However, these are just dreams, in reality, the Turks are waiting for the transfer of the next frigates excluded from the US Navy - USS Halyburton and USS Thanch (both are of the type “Oliver H. Perry”).

- ship integrated supply (tanker), designed to provide the Navy in remote areas of the oceans. There are suspicions that the American sailors will mostly use the Turkish KKS - a kind of "contribution" of Turkey to international operations. 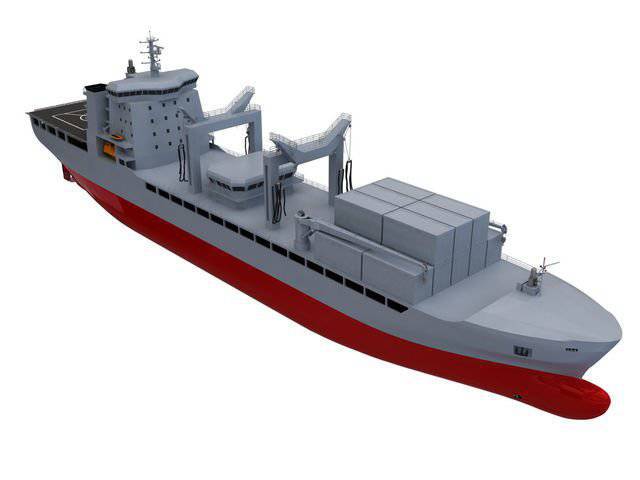 ***
Acınmaktansa haset edilmek evladır - “It’s better to be jealous than to be sorry,” says a Turkish saying. The situation is indeed alarming, the southern neighbor is rapidly increasing its naval power. There is not even a desire to laugh and feel sorry for the “unfortunate Turks” with their second-hand frigates - well-upgraded equipment, especially in large numbers, ensures the Turkish fleet dominance of communications in the eastern part of the Mediterranean. However, the matter is not even in the old frigates and not in the promising UDKV - the situation with submarines is much more dangerous: 14 Turkish submarines against two diesel-electric submarines of the Black Sea Fleet (one of which is under repair from 2000 of the year).

The Turkish fleet is stronger than ever and most adapted for solving local problems in the conditions of the Black Sea and the Middle East. The modern Russian Black Sea Fleet, by contrast, is the skeleton of the once mighty fleet, “sharpened” for solving strategic tasks in the Mediterranean Sea and in the vast world ocean. Just look at the appearance of the cruiser “Moscow” (the playful name is “grin of socialism”) to understand what kind of beast it is and for what purpose this magnificent technique is intended.

Nevertheless, it should be remembered that all the forces of the Turkish Navy (without division by areas of responsibility) are compared with the limited forces of the Black Sea Fleet.

The Black Sea Fleet in the 20th century, for a number of objective reasons, has never been the strongest fleet of Russia. For example, nuclear submarines have never been based here - such questions should be addressed to North Seamen. There is no doubt that with increasing tension, the ships of the Northern Fleet will arrive in the region and the Turkish fleet will simply dissolve against the background of this power. 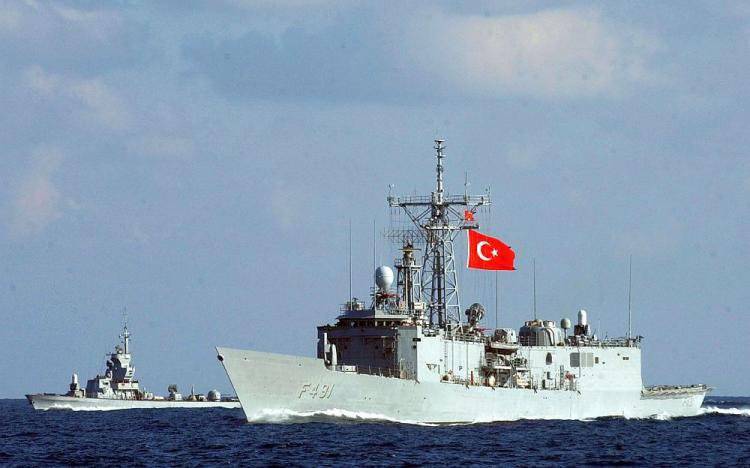