Transport plane crashed at Bagram military base in Afghanistan 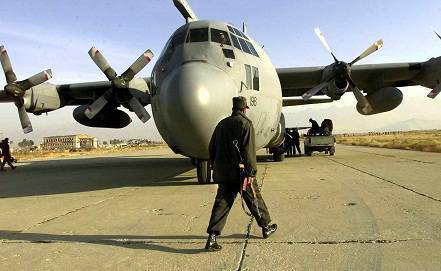 The cause of the crash of a civilian transport aircraft in the area of ​​the American military base Bagram, located north of Kabul, could be a technical malfunction. This was reported by the Afghan news agency Pajwok.
According to him, rescue teams are working at the crash site. The disaster occurred immediately after takeoff. So far there has been no information about how many people were on board and whether anyone managed to survive. Who exactly owned the plane is also not known.
Meanwhile, as the representative of the Taliban movement Zabiullah Mujahid told the agency, the aircraft was shot down by his militants, everyone on board died.
Representatives of the Western coalition immediately refuted the statements of the rebels, pointing out that no militant activity in this area was noted.
Ctrl Enter
Noticed oshЫbku Highlight text and press. Ctrl + Enter
We are
Deck tactical transport aircraft C-2 GreyhoundUS expert community is trying to identify ways out of the Afghan impasse
35 comments
Information
Dear reader, to leave comments on the publication, you must to register.