April 30 2013
10
The very first airfield appeared in Mojave in 1935 for the needs of local mines, where silver and gold were mined. During World War II, the airfield was nationalized and turned into an auxiliary air base, where pilots of the Marine Corps practiced cannon firing techniques. After the Marines liberated the area in 1961, the airdrome would most likely have turned into a desert if it hadn't been for Dan Sabovich, a rancher who is in love with Aviation. He took off on his Beechcraft Bonanza airplane from his personal runway, located near Bakersfield in California. Sabovich was seriously interested in this empty facility. He believed that a civilian test aviation center should be created in Mojave to serve experimental aircraft. The center should be run by an elected council, which could protect the airfield from political pressure and maintain a healthy spirit of adventurism. Sabovich possessed political wisdom, which corresponded to his remarkable ambitions. In 1972, after several years of heavy negotiations, the state authorities decided to create a “special area for the Mojave Airport.” 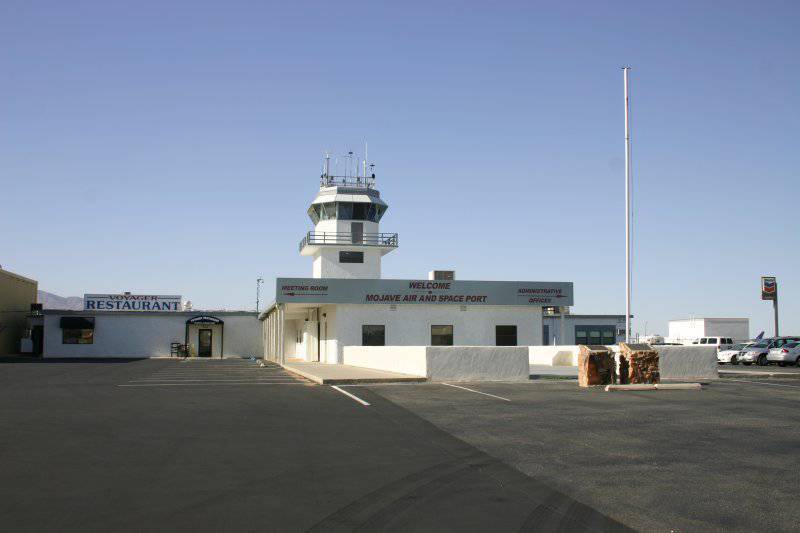 In the northern part of the city, a reticulated fence marks the border of the aviation and space port of Mojave, which occupies the 13 km2 km of the desert. The flight control tower towers over three runways, the longest of which stretched 3200 meters. 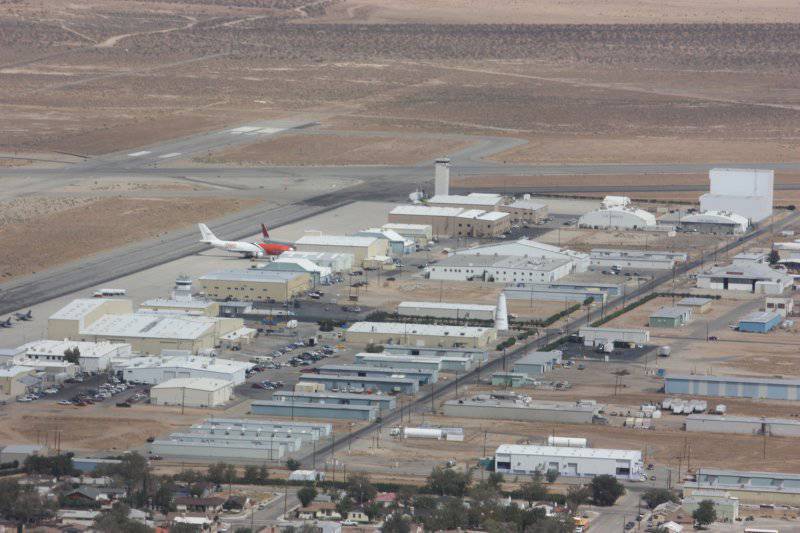 The seen hangars, partially built during World War II, lined up along the main airstrip.
What is happening inside the hangars and in the sky above them makes it possible to consider Mojave as a developing world center for aerospace research. In these buildings, sheathed with aluminum sheets, are created unusual aircraft and private spacecraft, as well as work on secret programs of the Pentagon. Almost all the doors of the hangars are tightly closed. Through those few doors that are open, you can notice large gas cylinders, technicians in oiled overalls and smooth outlines of white fuselages with black “tattoos” “experimental”, as required by the federal aviation authorities. Sabovich managed the airport until 2002, and died at 2005. But the concept of combining private business and public administration continues to live. Nowadays, most directors are tenants and pilots (or tenant-pilots). Mojave Aviation Center, also known as the Civil Aerospace Center, is located in Mojave, California, coordinates 35 ° 03'34 "N 118 ° 09'06" W, at a height of 2791 feet (851 m). This is the first facility licensed in the United States for horizontal launches of a reusable spacecraft, being certified as a spaceport in the Federal Aviation Administration 17 June 2004 of the year. The Mojave Air Center has three main areas of activity: flight tests, development of the space industry, repair and maintenance of various types of aircraft, including the largest aircraft. As well as the storage and disposal of civilian and military aircraft. As a storage base, the number of units of aircraft equipment Mojave strongly inferior to Davis-Monton airbase. 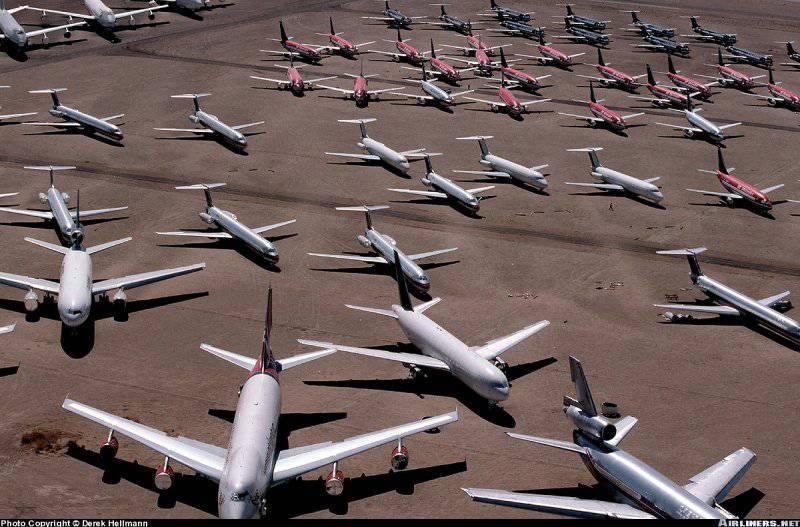 And unlike him, for the most part civil aircraft are stored and disposed of.
But there are exceptions, since until recently, EW EA-3 EW aircraft based on the Douglas A-3 Skywarrior attack aircraft were stored here. Until now, several F-100 Super Saber fighters, C-131 transport, and some other vehicles are stored in single copies.
Aviacenter has a rich history air races. There are races on the restored and upgraded piston aircraft, during the Second World War. In 1970, the first 1000-mile race took place. It involved twenty aircraft. Sherm Cooper won the race on a highly modified Hawker Sea Fury. The following year, the race was shortened to 1000-km, and again Hawker Sea Fury won, this time defeated Frank Sanders. From 1973 to 1979, biplane races were held. In 1983, Frank Taylor set the speed record in 517 mph, on the 15 km route, on the upgraded P-51 Mustang. 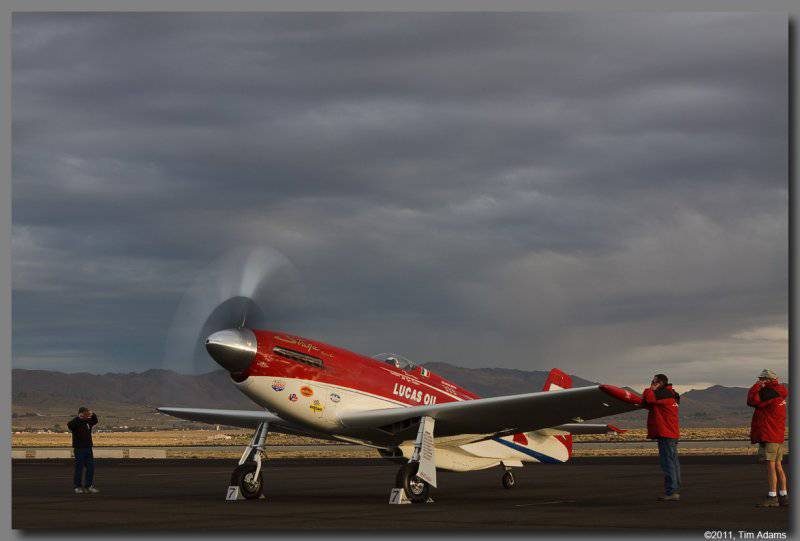 The mojave race was often hampered by constant winds and extreme temperatures. In 2000, the route was extended to bypass the city of Mojave to eliminate possible unpleasant consequences. Over the years, several famous teams were founded in Mojave. The two current racing teams are currently based in Mojave. In the hangars adjacent to the airfield are built airplanes of various projects, including sports, experimental and record. Including such unique ones as Burt Rutan's record "Voyager". 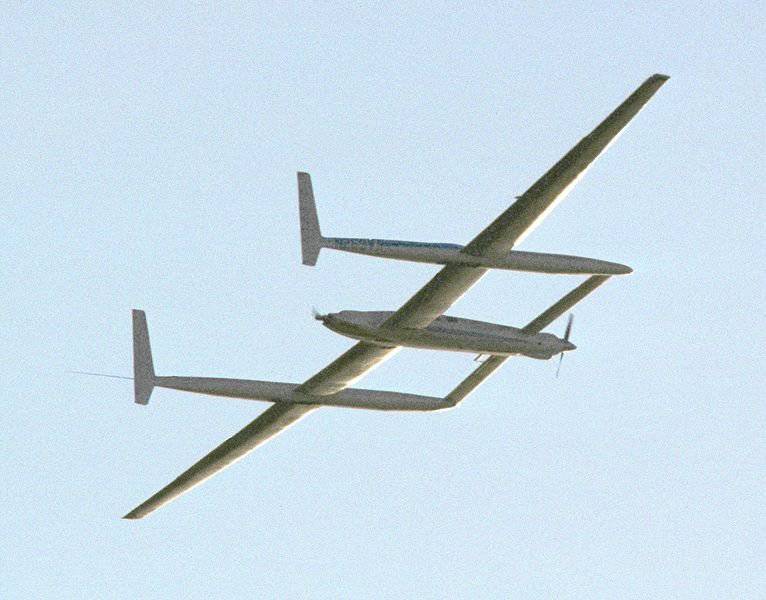 Voyager, the 76, is the first aircraft to fly nonstop around the globe without refueling. The plane was piloted by Dick Rutan (Eng. Dick Rutan) and Gina Eager (Eng. Jeana Yeager). The plane took off from the Edwards 4600 XM base band in Mojave 14 December 1986, and landed safely on it 9 days, 3 minutes and 44 seconds 23 December. During the flight, the plane overcame 42432 km (the FAI scored a distance of 40212 km), at an average altitude of 3,4 km.
This record finally broke the previous one set by the US Air Force crew,
piloted the B-52 and traveled 12532 miles (20168 km) to 1962.
Also on the territory of the Aerospace Center, a variety of aircraft in private collections, including combat MiGs of Soviet manufacture, are being restored and modernized.

flight tests
Flight tests have been concentrated in Mojave since the early 1970-ies, due to the lack of populated areas adjacent to the airport. He also advocates this goal thanks to his proximity to Edwards Air Base. At various times, various tests and tests were carried out in Mojave: SR-71, Boeing X-37, F-22 and many other machines. The aircraft, launched from this airfield, set the order of 30 world records. The headquarters of the National Test Pilot School is based in Mojave.

Space industry development
Due to its unique location, the airfield has become a base and test center for small companies looking for space technology development. The first is Scaled Composites Space Ship One, which conducted the first privately financed sub-orbital flight of 21 on June 2004 of the year. Other groups based on the Mojave Cosmodrome include XCOR Aerospace and Orbital Sciences. 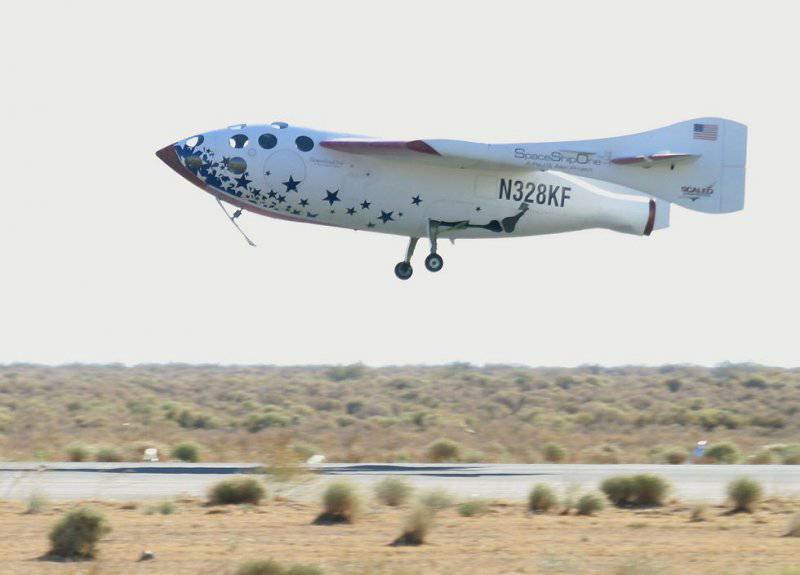 Space Ship One (Eng. Space Ship One) is a private reusable sub-orbital manned spacecraft, the second ever sub-orbit manned hypersonic aircraft after the North American X-15.
Made by Scaled Composites LLC (USA), which has been manufacturing experimental aircraft since 1982. One of the goals of the creation was to participate in the Ansari X Prize competition, where the main condition was to create a spacecraft capable of entering the space with three people on board twice within two weeks. The winner was to receive a prize of 10 million dollars. At the beginning of the flight, the ship rises to an altitude of approximately 14 km above sea level with the help of the special White Knight aircraft (White Knight). 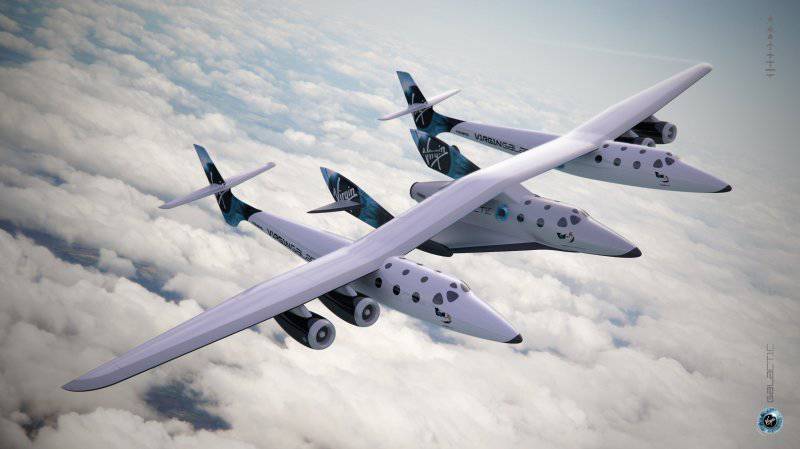 Then undocking occurs, Space Ship One is aligned for about 10 seconds, and then the rocket engine turns on. He brings the ship to an almost vertical position, the acceleration lasts a little more than one minute, while the pilot is experiencing an overload to 3g. At this stage, the ship reaches an altitude of approximately 50 km. The maximum speed of the ship at this point reaches 3 500 km / h (M 3,09), which is significantly less than the first cosmic speed (28 400 km / h, 7,9 km / s), which is necessary to enter Earth orbit.

A further journey to the boundary of the atmosphere (another 50 km) occurs under the action of inertia along a parabolic trajectory, like an abandoned stone. In space, Space Ship One is about three minutes. A little, not reaching the apogee of the trajectory, the ship raises its wings and tail, so that when it falls back and enters the dense layers of the atmosphere, it simultaneously stabilizes the ship and quickly takes it out of the dive into a planning flight. Overloads can reach 6g, but the peak of overloads lasts no more than 10 seconds. In this form, he
It descends to an altitude of about 17 km, where it again assumes the initial position of the wings and flies to the airfield like a glider. When designing the aircraft was used a number of original solutions. The main one was the use of a specially designed hybrid engine operating on polybutadiene and nitrogen oxide (N2O).

The cockpit is a sealed chamber where the necessary pressure is created. Numerous portholes are made of double-layer glass, each layer must withstand possible pressure drops. The air inside the cabin is created by a triple system using oxygen cylinders, carbon dioxide is removed by a special absorbing system.

A separate system controls the humidity of the air. All this allows you to do without space suits.

29 September. In 5 days, on October 4, 2004, the Space Ship One made its second successful test flight (last, 17). Pilot Brian Binnie climbed more than 112 kilometers and then landed safely on Earth.

The flight passed without any failures, the altitude record for manned airplanes was broken, holding 41 year (in August 1963 Joe Walker raised X-15 to 107,9 km). Thus, according to the rules of the competition, the creator of the company “Scaled Composites” became the winner of the program “X Prize” and received an award in 10 million dollars. One of the main creators, Burt Rutan, told people gathered around his house that he was confident of the success of today's flight. The success of SpaceShipOne, according to the creators, opened the space for private flights. 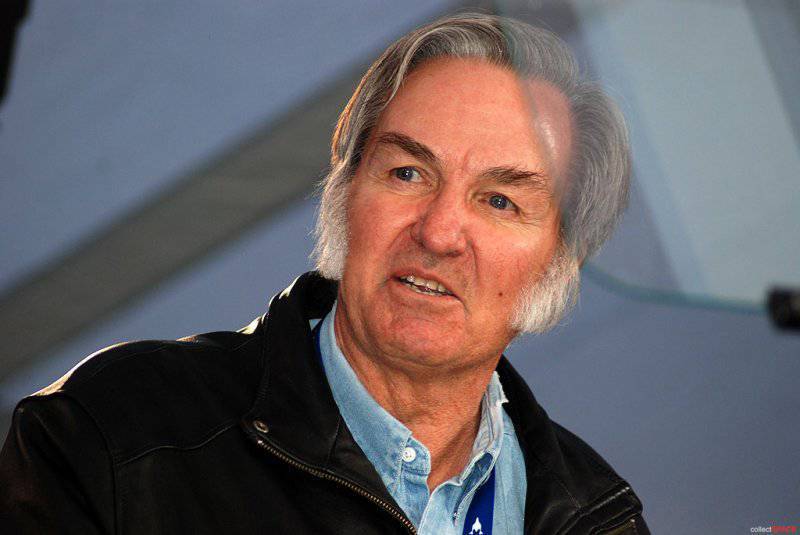 As Rutan said: “I feel well that our program will begin the renaissance of the human age in space.” Richard Branson, chairman of Virgin Atlantic Airways, announced the creation of the new Virgin Galactic space enterprise. The project will acquire a license for Space Ship One technology for commercial orbital flights, tickets for tourists will cost, starting with 200 000 dollars. It is hoped that in the next 5 years about 3 000 people will be able to fly into space.
The Federal Aviation Administration of the United States has granted the eastern region of the Mojave airfield, the status of a space launch center for spacecraft flights with a horizontal launch.

Storage, maintenance and re-equipment of aircraft

In addition to futuristic spaceships, experimental and racing samples on the runway, you can see planes of the Vietnam War. In a huge hangar at the back of the airfield, BAE Flight System redesigns the F-4 Phantom II aircraft into radio-controlled QF-4 targets that will serve as unmanned targets for testing air-to-air missiles at the Florida test site. In fact, "Phantoms" are preparing on the last journey. 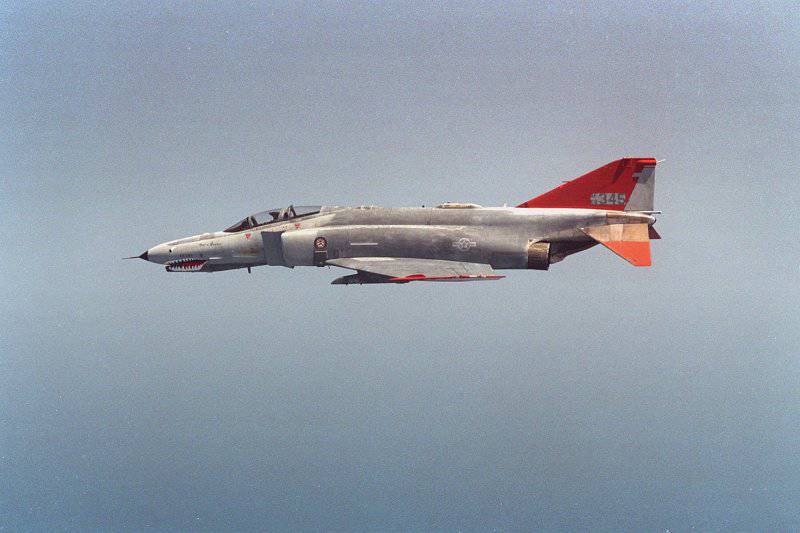 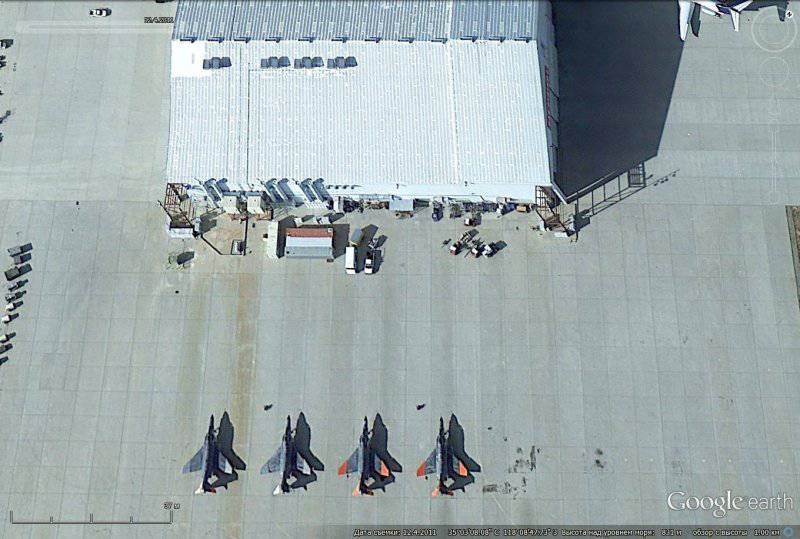 Mojave Airport is also known as a storage place for commercial airliners, due to the vast territory and dry desert conditions. 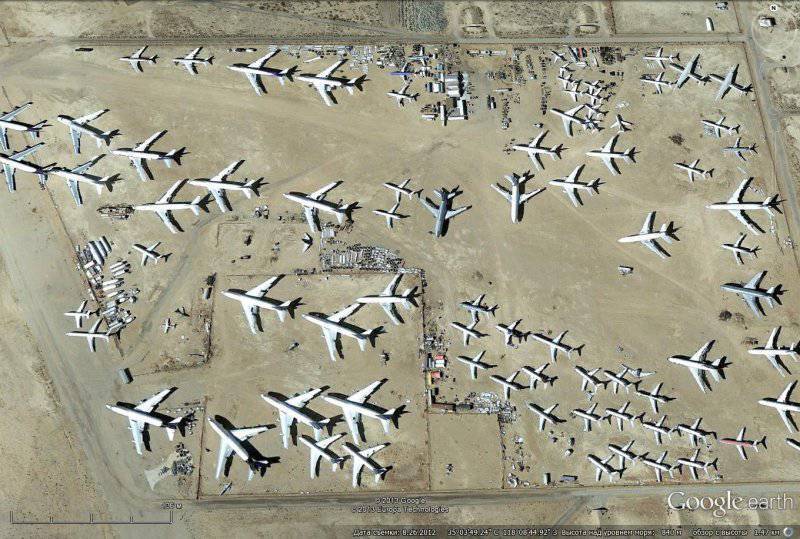 Many large airplanes, produced by Boeing, McDonnell Douglas, Lockheed and Airbus, belong to major airlines are kept in Mojave.

Some planes are stored until they are disposed of or disassembled into spare parts and parts, while others are repaired here and returned to active service.

Ctrl Enter
Noticed a mistake Highlight text and press. Ctrl + Enter
We are
A brief photo essay about the largest US Air Force aircraftAn-12 in Afghanistan
10 comments
Ad