OICW program and its results

April 29 2013
42
I think everyone knows about the most ambitious, in my opinion, failure in the world of manual firearms. weapons under the name of Objective Individual Combat Weapon. This program to create a new weapon has pulled out huge amounts of money from the US budget, which, on the one hand, cannot but rejoice, on the other hand comes an understanding that it’s useless to search for common sense in any country, even in the one where they can count money . The final chord (perhaps final) of this entire event was the adoption of an attempt to somehow justify the money spent, namely XM25 with the big name “Punisher”, “Hangman” in our opinion, although some prefer the “Punisher”. In general, there was a good reason to remember the whole history OICW programs. 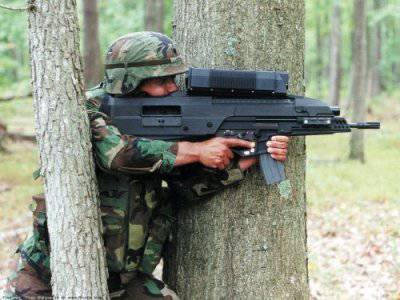 The beginning was the proposal received from Fort Brenning infantry school, the proposal was formulated correctly, but as usual, the idea was refined, distorted and even, one might say, perverted. The main essence of the proposal was to develop a rifle-grenade launcher complex, which would be distinguished by high efficiency, was balanced, in general, it was what the weapon with a rifle grenade launcher mounted under the barrel usually is not. It was decided to adjust the balance of the weapon with the help of a not quite standard layout of the grenade launcher with respect to the rifle one. So the barrel of the grenade launcher is located at the top, and the barrel of the machine gun is at the bottom. The main idea of ​​increasing the effectiveness was that the grenade launcher would explode not on the ground, but in the air near the target, but no one would suggest anything about achieving it. It seems to be all logical and correct, if it didn’t occur to someone that the century of high technologies and electronics was (1986 was the year then) and instead of solving the problem by an easy way, they decided to give the weapons and the grenade launchers themselves “brains” that took a lot of years.

The task of undermining a grenade shot near the target in the air, and not on the ground or in a collision with an obstacle, was decided as follows. The grenade launcher itself has a time-programmed fuse, the weapon has a rangefinder from which the distance to the target is read. Thus, the speed of the missile projectile and the distance is known, well, well, calculate the time and ask it to the fuse is the simplest thing. As a result, it becomes possible to hit the enemy behind a cover, say, a wall or in a trench. It is enough to direct the weapon in the direction of the enemy, measure the distance and press the trigger, the grenade launcher itself will explode in the air, which will not only provide better fragmentation of fragments, but also the ability to hit the enemy in cases where conventional grenade launchers are useless. 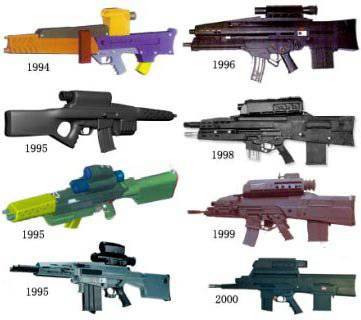 All would be nothing if not one but. But this consists in the fact that the grenade launcher part had to be self-loading, and the weight of the whole complex should have been reasonable, it was still planned to make such weapons basic for the army. As a result of the fulfillment of these simple requirements, it was necessary to reduce the caliber of a grenade launcher shot, and reduce it quite a lot. It was originally planned to create a grenade-shot caliber of the entire 20 millimeters. The result of this reduction was the flawless operation of the system as a whole, but with the defeat of the enemy there were problems. Since reducing the size of the grenade shot and led to a decrease in the total weight, respectively, the weight of the fragments, as well as their number decreased. Thus, on the one hand, it seems that the efficiency by the method of detonation in the air was increased, but at the same time it decreased due to the reduction in weight and the number of fragments.

The basis for the rifle part of the complex was originally decided to take G36, but, of course, not in the original, of course, variant, but there are no significant changes in the design. The most important change was the reduction in the length of the barrel of the weapon, and such a decrease that our "Ksyusha" nervously smokes aside. Naturally, this led to a decrease in the accuracy of the weapon, as well as overheating of the barrel during intensive shooting. If you do not consider these negative qualities, the weapon turned out to be stable due to the weight, but it is well balanced, but if it cannot shoot normally, then who needs these qualities. 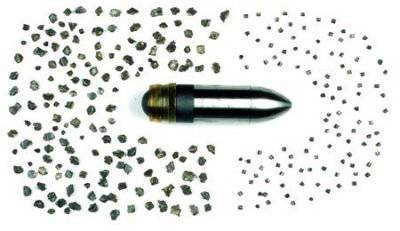 The problem with the rifle unit was decided by installing a barrel of normal length, which increased the overall length of the weapon, but with a grenade launcher it was not so simple. Taking into account the fact that the grenade launcher part had to be self-loading, and the weapon itself had to weigh so much so that the soldier could at least move somehow, then the forty millimeter shots were abandoned initially. Twenty-millimeter dropped due to low efficiency, as a result, it was decided to increase the caliber to 25 millimeters. The effectiveness of this was not equal to the forty-millimeter grenade launcher, but was already above the original version. In addition, around the weapon they were perverted for a very long time, but they did not manage to achieve an acceptable result, although a lot of money was spent, and time should also be taken into account. When it came to the realization that no result could be achieved and the intended weapon would never be perfect, it was decided to draw at least something from the project to justify the money spent. 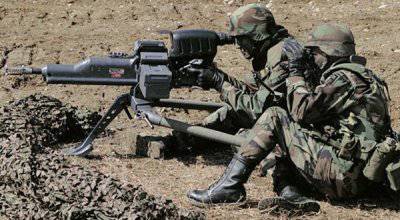 So the automatic grenade launcher HM307 appeared. The idea turned out to be very interesting, especially since with a fairly quick replacement of individual parts, the grenade launcher turned into a large-caliber machine gun for the .50BMG cartridges. The project was almost completed and the final result was very effective, despite the small effectiveness of the grenade launcher used, but the weapon has not yet been officially adopted. The reason was that it could be understood even at the design stage of a manual rifle-and-grenade launcher complex, namely the cost of grenade launchers. Naturally, with the established mass production, the cost of smart ammunition would be lower than with small-scale assembly, but there are two points: the cost would still remain quite high and would be more than the cost of forty-millimeter grenade launchers; during mass production, the quality of products inevitably falls and, in the absence of normal quality control, the defect can go beyond the walls of the plant. In general, they missed with this weapon, although who knows, maybe it will be adopted in the near future and it will be distributed.

Since it was very tempting to throw at the enemy with small grenades that would explode when approaching the target, but at the same time it turned out to be too expensive, it was decided to return to handguns. Since, by definition, such weapons had less ammunition, besides, small dimensions and weight significantly increased the mobility of the weapon, making it more flexible to use, this idea was accepted with a bang and a short work began on creating the first sample, which subsequent escalated into HM25. 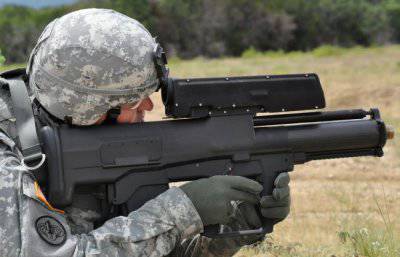 At its core, the HM25 is still the same initial design of a hand-gun grenade launcher complex, but now only in the form of a grenade launcher. The weapon is a self-loading hand grenade launcher in the layout of bullpup caliber 25 millimeters. Automation is built according to the scheme with removal of powder gases from the barrel, the barrel is locked by turning the shutter. Firing on single targets can be carried out at a distance of up to 500 meters, group targets up to 700 meters, which is quite good. Separately, it is worth noting that the weapon can work as the most common grenade launcher, that is, without electronics. But, naturally, this will not be the case anyway, although on condition that the electronics can refuse this is a very useful and prudent feature. The weapon itself is almost completely plastic, which is rather a minus. But the weight of the device, thanks to this, was reduced to five and a half kilograms. According to reviews of those who have had the opportunity to use these weapons, a grenade launcher significantly increases the effectiveness of the detachment, especially in the city. Although the weapon is kicked off decently, but sometimes it can be used to solve problems that would be impossible for another weapon.

In general, in my opinion, it is not practical to use 25 millimeter shots for a grenade launcher, and in general in this case it is ungrateful to go the way of reducing the caliber. All the same, but in the caliber 40 or at least 30 millimeters would be much more effective, although there are some nuances. Unfortunately, this is far from clear to everyone, but some people know how to think with their heads, as evidenced by the very effective result of conducting a similar program to create advanced infantry weapons, which was carried out in Australia, full-fledged grenade launchers of 40 millimeters are used there. In general, the weapon is interesting, some tasks are performed flawlessly, but some points could have been done much better.

Ctrl Enter
Noticed a mistake Highlight text and press. Ctrl + Enter
We are
XM25 semi-automatic grenade launcherHmxnumx
42 comments
Information
Dear reader, to leave comments on the publication, you must to register.