Crocodile tears of the "international community" 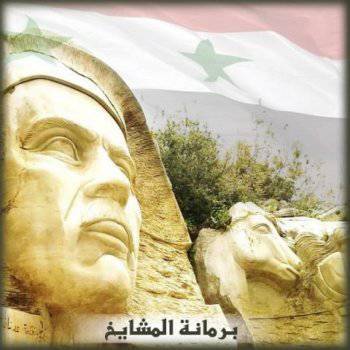 The UN representative on humanitarian issues, John Ging, made a report in which it noted that Syria had been thrown back tens of years ago in its development. He stressed that many streets and houses were destroyed, and they could no longer be repaired, but only rebuilt. Infrastructure objects are destroyed, enterprises are looted. According to him, schools and hospitals in Syria are not working.


Only one “forgot” to mention this UN employee - that this situation is developing in those areas where the so-called “opposition” was rampant. He did not notice that in most of the territory of Syria, life goes on as usual; children go to schools, hospitals treat patients, including those who have suffered at the hands of gangster mercenaries. The government is making truly gigantic efforts to, in spite of the difficult situation in the country, mitigate the suffering of the inhabitants.

Predators who want to take over the country have developed such an information strategy: at first, the structures dressing in clothes of “neutrality” speak of the suffering of the people, but they don’t say a word about those who really are to blame for this. Moreover, such reports contain hints, not even too hidden, of the guilt of the state. Here, in this statement of Ging, which says partial truth, there is a hint of this kind: “Heavy military equipment fired at residential areas: Tanksartillery. " But Mr. Ging “did not notice” traces of terrorist activity, which the Syrians walk every day. Neither the blown up building of the General Staff directly in the most prominent place of Damascus - on the Umayyad Square, nor the apartment buildings that were badly damaged by the explosion of a car bomb on the busiest street - As-Saura (Revolution), nor what the space behind one of the largest turned into after the recent terrorist attack buildings in the Syrian capital - the Central Bank.

And then other structures are connected that are not neutral at all. They use such reports for their own purposes - in order to put the blame on the Syrian leadership and monstrously distort the truth, thereby justifying the help to the bandits. Oh, yes - not the bandits, but the “peaceful rebels”!
There is a real speculation of the sufferings of the people. The Western media blame the Syrian leadership for everything, but they don’t talk about the growing support for gangs, supplying them weapons and other types of assistance. They shout, "Guard, burn, burn," and pour gasoline into the fire to make them even more blazing. To drop Syria in development no longer for dozens, but for hundreds of years ...

Under such an “umbrella” gangsters continue killing and destruction.

Again, their target was a suburb of Damascus Jaraman. On April 25, city halls and schools were shelled from mortars. 12 people died, about 30 injured. Among the victims are pupils.

In the village of Slanfa, in the province of Latakia, gangsters bombarded residential buildings, as a result of which one person died. There are wounded.

Terrorists continue their criminal plan to destroy national cadres. In the area of ​​Baramke, not far from the center of the capital, an explosive device was placed under the car of an employee of the Ministry of Electric Power Industry, engineer Muhammad Abdel-Wahhab Hasan, who was engaged in the issues of advanced training of employees in the energy sector. As a result of the explosion, an engineer was injured, from which he soon died.

Earlier, terrorists killed an employee of the Ministry of Social Affairs of the SAR, Ali Ballan. He was engaged in receiving and distributing humanitarian aid, including that sent from Russia. On one fateful day, he sat in a cafe near the Mezze motorway, where he was shot by criminals. This atrocity showed that gangsters are unprofitable when humanitarian aid is provided to the Syrian people.

Recently, the party of humanitarian aid from the Russian Orthodox Church was brought to Syria. She was accompanied by a representative of the Patriarch, who said that their column was twice fired upon by the militants - April 14 and 20. This was told by Archpriest Nikolai Balashov. But the “world community” is silent about this, although shelling of columns with humanitarian aid is a serious war crime of the so-called “opposition”.

Another information attack against Syria is connected with the UN special envoy Lakhdar Al-Ibrahimi. At first, he, as a capricious young lady, declared that he could resign, like his predecessor Kofi Annan. Then he disavowed his resignation letter - said he was (well, windy head!). But, 19 of April, speaking at a closed meeting of the UN Security Council on the Syrian issue, made a completely different statement (already pretty beaten): it turns out he should not leave at all, unlucky mediator, but ... of course, ATS President Bashar Al-Assad. And not just to leave, but to give up their legitimate right to run for the presidency in the upcoming elections in 2014.

This statement at a closed meeting became known only after a few days. The Syrian Foreign Ministry reacted to such words properly: it is nothing but a rude interference in the internal affairs of a sovereign state. Only the Syrian people have the right to choose their leaders. If the UN special envoy wants to continue his mediation mission, then he should be neutral, - the Syrian Ministry of Foreign Affairs emphasized in a statement.

I would like to ask a simple question: who, where and when from the outside forbade anyone to stand for election in his own country? Those who care so much about “democracy” and “human rights” should have known for a long time that the right to elect and be elected is sacred and inalienable.
Whether or not Bashar Al-Assad will be elected president is only for the Syrian people and no one else. This is democracy. But the fighters for it are now trying to present the situation in such a way that, they say, Al-Asad does not want to leave, and because of this, all the troubles.

But the fact that such “proposals” arise, which are soft blackmail, indicates that the West is afraid of the popularity of Bashar Al-Assad. It would seem, wait for the elections, and let the opposition also nominate their candidate. Already people decide who to choose. But for some reason such a democratic decision does not appeal to those whose interests are represented by Lakhdar Al-Ibrahimi.

And without giving the Syrian people their legitimate right to choose their own destiny, without terrorist threats - all the lamentations about the sufferings of people, that the country has been thrown back and much has been destroyed are meaningless. They are nothing more than the tears of a crocodile that cries when it eats a person.

Ctrl Enter
Noticed a mistake Highlight text and press. Ctrl + Enter
We are
Situational analysis of the death of the MH17 flight (Malaysian Boeing 777), made on the basis of engineering analysis from 15.08.2014Syria: Americans scare themselves, and Asma Asad buys chairs
50 comments
Information
Dear reader, to leave comments on the publication, you must to register.