April 27 2013
14
A combat helicopter regiment with all the infrastructure was stationed in one of the Transcaucasian cities. And we from the city of N drove there our boards to perform the most complex and laborious maintenance work (12 and 24's monthly).


Somewhere in the middle of 1992, when the local regiment was disbanded, we started to make peace there. Two pairs of Mi-24 and a pair of Mi-8. Our task was to air support peacekeeping operations. 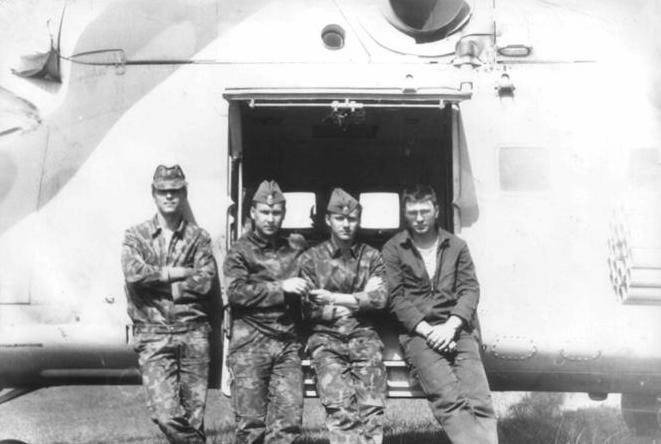 They lived in a database house (combat duty), played billiards for days, they cooked themselves in the field kitchen. There were few departures, so boredom and idleness were slowly disintegrating our brave team, and they were forced to commit acts that were often incomprehensible and even reckless for a normal civilian person.

For six weeks the stew was so fed up that they became perverted - they put the stew through a meat grinder, mixed it with bread, and cooked burgers out of it. It turned out not bad.

Once, a local Ossetian exchanged indo-oil for 40 liters of kerosene. I first heard such a phrase - indooot. More like a regular duck. Our was very thin, so we decided to fatten it. Week held in the closet, fed than they could. A week later, tired, we decided to stop her torment. (...) The process of "transformation" of a living bird into a ready-to-use product will not be described in order not to injure the reader's mind. Let me just say that this process was long and laborious. In short, the indoout turned out to be "rubber."

Near the airfield was an apple orchard. The commander of the paratroopers company, which was guarding the airfield, warned us sternly that the area between the airfield and the garden was mined. As it turned out, he was somewhat exaggerated in order to limit our senseless fermentation on the airfield and not create problems for the posts.

Then one day, having consumed the next dose of red Georgian wine, the helicopter pilots, that is, we really wanted apples. Being confident that the field was mined, and to go around it very far, we began preparations for the sapper-mine transition. Refueled, put on sports shoes, took with them a raincoat (for apples) and a shovel. The navigator remembered that he had seen in the movie how to look for mines and took a ramrod from a machine gun which he called mine detector.

It was getting dark. Tired during the day, the hot sun lazily lowered over the top of the mountain. Four brave heroes, praying and drinking wine to maintain their tone, moved on their way.

Before the cherished goal we were separated by about 150 dangerous meters. Ahead with the "mine detector" was a fearless navigator. Every 10 see, he poked a ramrod into the ground looking for mines. Every time the ramrod rested against something solid, he carefully dug out some stone with his hands and a shovel. Behind him, three helicopter pilots followed, trailing either from the wind or something else. Trailing branches marked the path traveled for return.

After about an hour of 2, we reached the coveted apples, almost in complete darkness, we took a full tent and went back.

Back traveled even longer. For the stress was already quite sober. The usha commander of the assault company and the helicopter pilots remaining in the ambush waited for us at home.

... The apples were unripe and sour.

Odurev from idleness, monotony and heat, once I came across a dump of all junk and scrap metal near our database house. The hands of a techie, as you know, can not do without iron for a long time. Therefore, not knowing why, I began to poke around in scrap metal and sculpt something. I came across an old electric motor, a big fan from an automotive radiator cooling system, some stainless steel sheets, aluminum wire, etc.

Combining all this together with the help of improvised rivets and nails (“military repair” was not in vain), it turned out to be a rather large and heavy windmill, which I hoisted on a small knoll in the parking lot with the help of an iron pin.

There was complete calm - the windmill did not function. All together laughed at my statue and by the evening they forgot about it.

At night, when the aviators slept soundly, a strong wind rose in the mountains. The patrol companies of the assault force, who were on duty at the posts, suddenly heard a terrible rattling and clanking sound, which came as if from somewhere under the earth and that amplified, then subsided. The uncertainty of the origin of this sound and its chaos horrified the young paratroopers, who had raised their weapons in a fighting position, and immediately reported to their commander.

Strengthening the posts, the commander quickly found the source of the alarm, cursed to himself, and fearlessly entered into a fight with him. The landing force won, and the soulless metal idol heroically fell.

In the morning only a lonely stick stuck out of the ground.

Ctrl Enter
Noticed oshЫbku Highlight text and press. Ctrl + Enter
We are
The death of the BOD "Brave"Turntables, Afghanistan. "Eight"
14 comments
Information
Dear reader, to leave comments on the publication, you must to register.