6 May 2013
39
Given the popularity of the pistol GSH-18, past this weapons it is simply impossible to pass. The gun is really very interesting, both with its appearance and design, caused and causes a lot of controversy, which have not ceased to this day. Despite the fact that the weapon is quite famous, there is a lot of gossip around it, and for many even the automation system is a mystery. Let's try to get acquainted in detail with the gun, with his history creation, design, as well as the reasons why this gun did not become the main gun in the army. 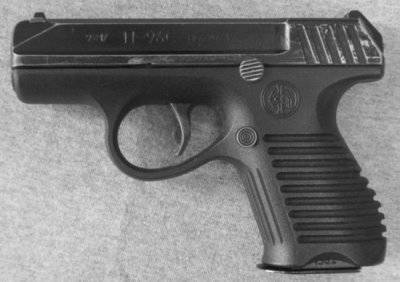 It’s probably worth starting with the fact that the GSH-18 did not appear from scratch, this weapon has a predecessor that, although it is different in many details, is unconditionally a weapon that provided the basis for a pistol. This is a model named P-96. This gun was developed by one of the creators of the GSH-18, namely, Vasily Petrovich Gryazev. This weapon is somewhat unusual, since it uses the unreleased barrel bore locking system, which is not common not only in pistols, but also in the firearm as a whole. The barrel bore is locked when it is turned, by the coupling of the protrusion above the chamber and the window cutout for spent cartridges. Let's try to figure out what kind of weapon they are and what they eat it with.

The gun exists in three versions for three different ammunition. The first option under the name П-96 is powered by 9х19 cartridges, the П-96М variant uses 9х18 and П-96С ammunition "eats" 9х17 cartridges. The capacity of the ammunition stores is 18, 15 and 10 cartridges, respectively. The weight of the gun without ammunition is 570 Gram for a pistol П-96, 460 gram for a pistol П-96М and 450 gram for П-96С. The total length of the pistols in the same order is 188, 152 and 151 millimeters. With tsiferkami finished, now let's figure out how all this mess works, and the weapon works quite interesting. 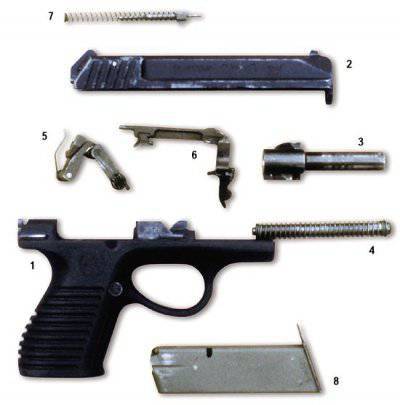 In its normal position, the protrusion above the chamber enters the cut-out of the window for ejection of the spent cartridge case, which makes moving the housing-shutter separately from the barrel impossible. When fired, the powder gases push the bullet forward and press not only on the walls of the bore and the back of the bullet, but also on the bottom of the sleeve, trying to push it out of the chamber. As a result of this impact of the powder gases on the sleeve, the bolt of the weapon comes into motion along with the barrel. In fact, the movement begins at the moment of the shot, but against the general background, we can say that when fired, the barrel and shutter remain motionless. The fact is that the time of passage of a bullet through the barrel is very small, and the mass of the barrel and the housing-bolt are large enough to acquire the same speed as the speed of the bullet. Due to the mass of the barrel and the housing-bolt, enough energy is stored so that the bolt and barrel of the weapon move only after the powder gases cease to act on the bottom of the sleeve. Thus, at the initial stage, the barrel and the shutter-casing move together, but in the process of movement, the barrel begins to turn. Turning 30 degrees to the left, the barrel emerges from the clutch with the casing and the bolt stops, the casing-bolt continues to move further back, removing the gun case from the chamber and throwing it out. Having reached its rearmost point, the shutter-casing changes its direction. Moving forward, the shutter casing removes the new cartridge from the magazine and inserts it into the chamber. Having rested in the breech breech, the shutter-casing pushes it forward, which again leads to its rotation in the opposite direction. In this case, the protrusion above the chamber enters into the coupling with the casing-gate for the window for ejection of spent cartridges. 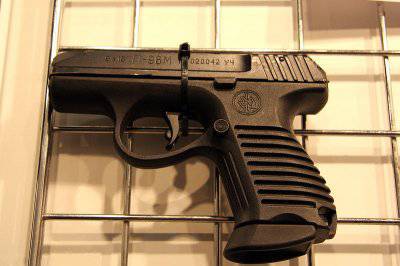 The trigger mechanism of a double-action pistol with a partial cocking of a drummer. That is, when the casing-bolt is retracted, the drummer is not fully cocked, but only partially. Its dovzvedenie occurs when you press the trigger. Quite unusual for domestic weapons are safety devices, or rather the device. So, on the trigger is a safety key that protects against accidental pressing the trigger. I must say that the shape of this safety element was not the most successful, for which the pistols often receive negative reviews. Shutter lag is controlled by a button. Sights consist of a pillar and front sight, which are not regulated. We should also note the plastic frame of the weapon.

Unfortunately, the weapon was not successful, although it was adopted by a number of services. Particularly unlucky model P-96 which simply ceased to be made in view of its low reliability. This version of the gun chambered for 9x19 was positioned as a weapon for the army, but its design was not strong enough and reliable. Everything was aggravated by the fact that 9x19 cartridges of domestic production appeared, with a greater kinetic energy of the bullet. Precisely because for the army this gun did not fit and the development of the GSH-18 was started. 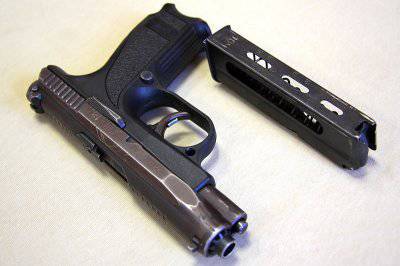 Another parent appeared at the pistol itself, so Gryazev and Shipunov were already working on the weapon. If we consider the GSH as a continuation of the development of the P-96, then it is impossible not to note the tremendous work that the designers have done, since despite the general identical principle of operation, two different samples have come out.

The first thing to note is the reduction in the barrel of the weapon, which made it possible to reduce the impact of recoil when firing, making it more convenient. In order to increase the reliability. The weapons had to rework the system of locking the barrel bore, which became locked on the 11 protrusions and was no longer outside the window for the ejection of the sleeves. In addition, it was possible to reduce the angle of rotation of the barrel when unlocking and locking, which increased the resource of the weapon. So the gun could quite normally transfer work with more powerful 9x19, had quite good ergonomics, a roomy store and could become an excellent sample of weapons for the army. But it did not work out. The reason for the fact that weapons did not become widespread is rather expensive and complicated production, which can be justified only with very large quantities of weapons produced. And in this place the most interesting. It turns out that in order for the pistol to be justified to be produced it is necessary to produce a lot, while arming the army requires just that much, but the GSH-18 is not suitable because its production is not justified. Vicious circle. But mass production in small batches as a premium weapon can be afforded. Here, really, the mind does not understand Russia. 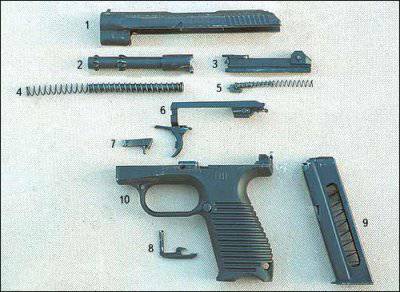 By itself, the gun came out very well, of course, there are certain problems with the reliability of weapons in adverse conditions, but they are not as serious as the opponents of this gun would like. Although honestly, the time for 9x19 ammunition is gone, and it seems to me that it would be more logical to move towards reducing the cost of producing 9x21 cartridges (SP-10, SP-11 and so on) and accordingly switch to weapons for these ammunition. In my opinion, for the army at the moment the best option.