April 26 2013
177
5 April 2013, the Ukrainian President Viktor Yanukovych said that Ukraine is ready to become an observer in the EurAsEC Customs Union. Observer status is a kind of intermediate option between the absence of a state in an organization and its full presence there. The status itself makes it possible to participate in board meetings, allows you to open your representative office, work on documents, but does not give the right to vote on certain issues.


Just recently, the Prime Minister of the Ukrainian Government, Mykola Azarov, announced that the countries participating in the Customs Union (Russia, Belarus and Kazakhstan) decided to meet Ukraine halfway and approve it as an observer in the CU. True, no official confirmation of this information is given by representatives of the leadership of the structures of the Customs Union itself. At least, the site of the CU regarding the provision of observer status to Ukraine is silent. In addition, representatives of the Russian government said that the status of Ukraine regarding its stay in the Customs Union has not yet been determined. 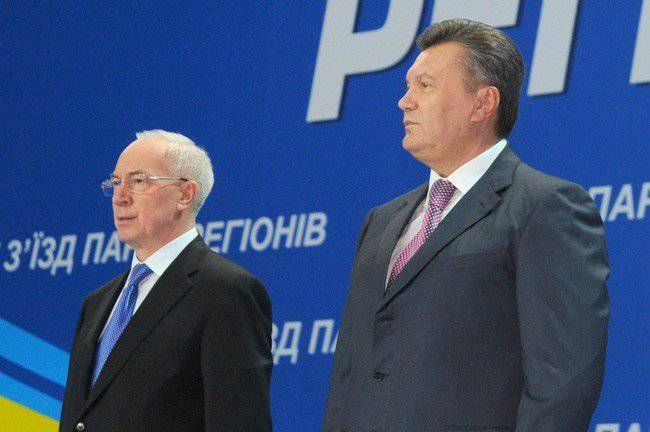 The situation was even more confused by Alexei Likhachev, who is the Deputy Minister of Economic Development of Russia. He stated that he did not understand at all what was going on, since in the Customs Union there is still no such thing as an “observer country”. Likhachev noted that Ukraine has an observer status at EurAsEC, and Ukraine also has a request for observer status with the Eurasian Economic Commission, but it’s impossible to say that Ukraine received observer status in the Customs Union. A federal official noted that all issues related to this clearly entangled integration process may be decided as early as May of this year.
If you believe the official website of the Customs Union itself and the representative of the Russian Ministry of Economic Development, then it turns out that Azarov is clearly running ahead and is engaged in the substitution of concepts. For what purpose? And the goal, obviously, is to somewhat improve the rating positions of both himself and the current Ukrainian president. The fact is that at the same time as talking about the “observation” of Ukraine in the Customs Union in Ukraine itself, certain forces are trying to reach Brussels. This is due to the upcoming signing of a document on the so-called association of Ukraine and the European Union. Only the beginning of this association of Ukraine and the EU is scheduled for the second half of this year (presumably for the fall), but questions about the integration of Ukraine with the EurAsEC Customs Union, according to the Russian representatives of the CU, are planned to be to some extent resolved in May.

Understanding that Ukraine can still turn in the direction of Russia, Kazakhstan and Belarus and, accordingly, turn away from the European Union, the so-called Ukrainian opposition forces decided to start beating all the bells in order to draw the attention of Brussels to the “Ukrainian problem”. In particular, the opposition Ukrainian politician Yuriy Lutsenko (ex-Minister of the Interior) decided to directly appeal to the leadership of the European Union, so that he immediately went to the signing of an associative agreement with Ukraine. They say that if Brussels is delayed with the Ukrainian association, Ukraine will finally be lured onto its side by Eurasian Economic Community, which, in the opinion of the ex-minister, should not be allowed.

It is noteworthy that the European Union has repeatedly spoken out about relations with Ukraine. The last time the words looked like this: if Ukraine chooses integration with the CU, then it, accordingly, refuses to integrate with the EU. Thus, Brussels made it clear that the attempt of President Viktor Yanukovych to sit on two chairs at once, and at the same time still manage to catch the fish in the muddy water of a double game is unlikely to succeed. It turns out that EU representatives make Yanukovych understand that his choice should be the only one: either the course towards European integration, or integration in the post-Soviet space (with Russia, for example).

However, that seems to be the peculiarity of the head of the Ukrainian state, that he does not want to make an unequivocal choice. This, in particular, is evidenced by the fact that in 2012, Mr. Yanukovych immediately after speaking of a course on European integration, unexpectedly declared that at the same time he was following the development of the Customs Union of Russia, Belarus and Kazakhstan. At the same time, the president of Ukraine added that Ukraine is ready to start cooperation with the CU within the framework of the formula “3 + 1” at a certain “sectoral level”. What would this “sectoral level” be? - then could not even explain the major experts in the field of state integration. Translated from Viktor Fedorovich’s language into an open-source language, this “rapprochement” option apparently means that Ukraine inserts the front edge of the boot into the Russian-Belarusian-Kazakhstani common door so that this door does not slam shut before Kiev. At the same time, other parts of Ukraine could also push the European doors. It was in all likelihood that the Ukrainian state, which was led by Viktor Yanukovych, was going to remain in such a strange position, giving the opportunity to squeeze in one door or another.

But in the 2012, neither the “3 + 1” variant, nor the “sectoral level” of Ukraine, the Customs Union did not suit. Viktor Yanukovych was asked to dot the i's and determine the final direction of the integration course of Ukraine. Apparently, after long and difficult deliberation, Viktor Yanukovych decided to make another knight's move: it was not the desire to join the Customs Union that was declared, but the desire to become his observer. If we take into account that such status is not spelled out in the TS Charter, then Yanukovych’s proposal again gives some attempt to keep a backup option for himself.
However, this fallback option looks rather dubious. If Ukraine really receives the status of an observer of the CU, which, it must be recalled, Mykola Azarov has already announced, and if after that Ukraine signs an association agreement with the EU, then these two actions can hardly be called obvious integration processes in two directions at once. The fact is that the association agreement with the European Union was signed by such countries and territories as, for example, Chile, Mexico or even the Palestinian Authority. Well, no one at the same time thinks that the association of the Palestinian Authority and the EU can lead to a real economic (not to mention political) association of these territorial entities. At the same time, observer status in an organization can be, in fact, indefinitely, but this does not add constructiveness in economic or geopolitical mutually beneficial cooperation. There is no need to go far for examples here: Commonwealth of Independent States. Obviously, not all residents of the CIS themselves are aware of the fact that Mongolia, for example, is an observer in certain structures of the CIS. And Afghanistan is an observer in the Inter-Parliamentary Assembly of the CIS countries. So what? Someone thinks Mongolia or Afghanistan are somehow integrated with us? Hardly…

It turns out that the promise of the “observant” role of the Ukrainian authorities in the Customs Union and in association with the EU does not constitute a clear and unequivocal choice. And therefore you can use beautiful words in the style of “sectoral level”, “associative integration” and so on, as much as you like, but the sense of using them is still zero. Whatever one may say, Viktor Fyodorovich and his party will have to decide which direction for Ukraine to choose. And the sooner this unequivocal decision is announced, the better it will be for Ukraine itself.

Ctrl Enter
Noticed a mistake Highlight text and press. Ctrl + Enter
We are
Situational analysis of the death of the MH17 flight (Malaysian Boeing 777), made on the basis of engineering analysis from 15.08.2014Results of the week. “We were sincere in our delusions!”
177 comments
Information
Dear reader, to leave comments on the publication, you must to register.