Death and blood - in the name of Syrian oil 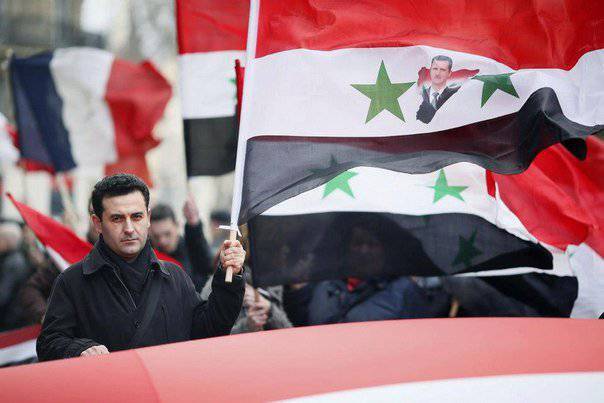 A delegation from Iran visited Damascus. It was headed by Alaeddin Boroujerdi, Chairman of the Committee on National Security and Foreign Policy of the Council of the Shura (Parliament) of the Islamic Republic of Iran.

Iranians received UAR President Bashar Al-Assad. He confirmed that the Syrian leadership is interested in cooperation with Iran in all areas.

The head of state said that what is happening in Syria is part of a plan to destabilize and split the entire region. Under these conditions, all its inhabitants, and especially deputies, have a great responsibility to preserve peace and oppose hostile plans. According to him, the deputies of Syria and Iran are the real representatives of their peoples, and their duty is to protect the citizens of their countries.

Iranian parliamentarians reaffirmed that their country is ready to support Syria in its fight against a foreign conspiracy.

The Iranian delegation led by Boroujerdi also met with the SAR Foreign Minister Walid Al-Muallem and other government representatives. Boroujerdi gave a press conference in Damascus, where he stressed that this visit to Syria is a sign of Iran’s support for the Syrian people and solidarity with this fortress of resistance.

An Iranian politician strongly condemned the United States and its satellites for spending huge sums of money in the name of interfering in the internal affairs of Syria, either directly or indirectly. These countries train terrorists, supply weapon and therefore bear full responsibility for the blood of the Syrian people.

He added that the United States pursues a hypocritical double-standard policy, stating that they protect human rights, while they are grossly violated in Syria, Afghanistan, Palestine, Pakistan and other countries.

The price of "opposition" promises

At a meeting of the so-called “friends of Syria”, which took place last weekend in Istanbul, representatives of the terrorist “opposition” made a statement that seemed sensational (although implausible to any normal person). They stated that they completely abandon the methods of terror. Let the West revise the sanctions it imposed against Syria, so that only the state and its people, but not the "oppositionists", suffer from them.

For whom is such a statement made about the rejection of terrorist methods? For the gullible ordinary citizens of Western countries. Those political decision makers are, of course, sufficiently experienced and cynical to understand that no refusal of criminal methods is planned, but, on the contrary, with the increase in weapons in the hands of gangsters, the bloodshed will increase. But politicians who are outwardly respectable, but in fact unsuccessfully trying to wash off the blood from their hands, do not care: just to put the disobedient state on its knees. The words “democracy” and “human rights” for them are no more than a cloak, under which their leper essence is hidden.

But this cloak begins to crack at the seams. Even in the West, among many ordinary citizens, accustomed to believe what’s in the top News, questions already began to arise: why support outright terrorists? Their atrocities cannot be silenced or covered with a cloak. Truth breaks out. Even the unthinkable demonization of Bashar al-Assad that has reached the point of absurdity does not help to prevent "uncomfortable" issues.
And here comes the statement of the "opposition": they say, we are abandoning the methods of terror, just help us. But then why should militants have weapons or even the so-called “non-lethal” means if they refuse terror? Yeah, well, of course, for "defense." (The First and Second World Wars were also unleashed exclusively “for defense”!) Public opinion can calm down.

So, the solemn promise of the wolves not to eat meat was made on Saturday, 20 of April.

And on the same day, as a result of a grenade launcher attack on the Damascus suburb of Artuz, residential buildings were damaged and civilians were injured. In the metropolitan area of ​​Barze, terrorists shot a minibus, killing one person and wounding 16. In Aleppo, in the Jamilya area, bandits fired a projectile through a sports club, as a result two schoolchildren were injured.

Terror continues, despite all the promises of the "opposition". On April 22, criminals shelled a school in the Dahiyat metropolitan area. 5 people were injured, two of them seriously injured. In the densely populated quarter of Ash Al-Barbarian, near the bakery, another mortar shell fired by militants exploded. Another school was shelled in the Barze area. Her building is destroyed. Two sixteen-year-old girls were killed - they died at the very threshold of youth at the hands of those who promised to abandon criminal methods. Five children were injured.

In the province of Damascus in the village of Mlekha, a suicide bomber blew up a mined car, several civilians were injured. Some of them are in serious condition.

April 23 thugs again "distinguished" in Aleppo. There were abducted two Christian clergymen who were carrying out a humanitarian mission - the Metropolitan of the Antioch Orthodox Church Pavel Yazyzhi (brother of Patriarch John X Yazezhi) and the Metropolitan of the Syrian Orthodox Church Gregory Ioann Ibrahim. The driver who drove them was ruthlessly killed by terrorists.

Even the Pope joined in the liberation of the clergy, who condemned this robber action. Then, the media reported that the terrorists allegedly released them - to calm public opinion. But this message, unfortunately, turned out to be premature. At the moment, the fate of the abducted is not known.

That is the price of the promises of the militants of the so-called "opposition" - they are not worth a penny.

22 April The European Union, based on the false, worthless promises of the "opposition" to stop the terror, decided to partially soften the embargo against Syria. But - in such a way that this mitigation will not bring any benefit to the country and its people, but only to those who, being elected by no one, try to represent the Syrians at the gatherings of "Friends of Syria" who try to impose their will on the people with the help of weapons.

The EU Council decided to soften the sanctions on oil imports in such a way that European companies are allowed to buy oil from Syrian rebels. In addition - sell them equipment for oil production.

Politicians who make such a decision did not think that buying stolen goods was always considered an extremely unattractive and criminal matter. But now they no longer just want to help terrorists free of charge - it smelled like money and oil. Why not cash in? Moreover, no one in the West was particularly worried about the theft of equipment and products of Aleppo’s factories and plants and sending them to Turkey. These are “little things” - they want to rob big.

The MFA CAP, of course, called such a measure aggressive and even pirate. In a statement, the Foreign Ministry stressed that Syria reserves the right to protect its sovereignty and its natural resources from being plundered.

The Syrian side also demands from the UN Security Council to give a fair assessment of this lawless decision, which contradicts all the norms of law and serves only to support the terrorists.

However, US Secretary of State John Kerry, at a meeting of the NATO Council in Brussels, said that he had no evidence that militants controlled the oil fields in Syria.

Then, one wonders, why was this decision made?

Indeed, the real militants now have little control. It happens that for some time they manage to capture strategically important objects. Including oil wells and oil pipelines. There are cases when they set fire to oil wells, causing enormous economic damage to the state (as it was a few weeks ago in Deir ez-Zor).

But the West now wants the rebels to sell him Syrian oil on the cheap. For this, the militants must control at least something. At the same time, the neocolonial powers of Europe are discussing the issue of lifting the embargo on the supply of weapons to terrorists. Apparently, in the hope that these weapons will allow them to take control of such mouth-watering deposits. How much blood will be spilled at the same time — politicians-thieves do not care. For them, this is only the arithmetic of the war, which turns into another war for oil.

Ctrl Enter
Noticed oshЫbku Highlight text and press. Ctrl + Enter
We are
Bashar al-Assad: In Syria, not the “revolution” that the enemies are talking about, but the revolution of the army and the people against terroristsSyria: Americans scare themselves, and Asma Asad buys chairs
Military Reviewin Yandex News
Military Reviewin Google News
98 comments
Information
Dear reader, to leave comments on the publication, you must to register.