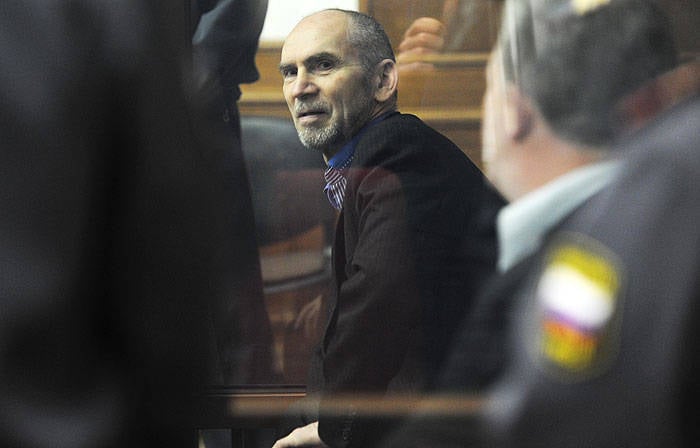 Our appeal to you is the appeal of two adults, accomplished people, who sincerely love our Motherland, Colonel Khabarov Leonid Vasilyevich and scientist-inventor Kralin Viktor Sergeevich.
We were brought up in the Soviet Union on the principles of high morality, selfless love and service to the Motherland, principles of justice, equality, honor and non-indifference to the events taking place in the country.

That is why we boldly, decisively and openly declared to the authorities that failure to comply with the Law or its extreme selectivity of implementation, extreme corruption, a catastrophic state of affairs in industry, economics, science, the collapse of the armed forces, which can now safely be called the Armed Forces, can lead to irreversible consequences. and pose a threat to the existence of Russia.

We were and remain Soviet people who have absorbed all the best, based on the principles of justice and fairness. Because of indifference, the position of an outsider, and, at times, our cowardice and groveliness of ours, we have once lost our homeland - the Soviet Union.

We appeal to you, Citizens of Russia! To the heart of each of our compatriot, as we consider it our duty to be extremely honest and objective. 26 February 2013 of the year was pronounced on a custom-made falsified FSB investigator PA Lukichev. the case of the Ural rebels. This is a criminal case in which FSB agents, two former officers (as is known, there are no former officers, are in reserve, retired, the officer and in the coffin remains an Officer, only sold their honor for the Judean silversmith, stained with dirty, incompatible with the high rank Officer act, become former) commando Botnari II and Gorbachev OS (former special forces - "in the family is not without freaks") used a mentally ill person, who was actively deliberately provoked to stage a preparation for illegal actions, thereby giving the secret services a reason to crack down on patriots, their families and other dissenters who did not agree with the lawlessness created in the country. Not realizing that by blocking the legal ways of the people’s struggle for justice and a decent life, they are pushing the protest movement towards illegal methods of fighting arbitrariness, and this, as a rule, can become unpredictable, because justice cannot be forbidden, as well as the desire of the People for a decent life.

This is completely a fake case collapsed during court sessions, like a house of cards, despite the fact that the state. the prosecutor - prosecutor Abashev D.T., in carrying out the order, did everything to give the court process a clearly accusatory direction to the accused, and by all means, mostly illegal, blocking out, leading the FSB investigator Lukichev PA into the “shadow”, and two introduced provocateurs Botnarya I.I. and Gorbachev O.S. for irrefutable evidence of their criminal acts for provocations, performances, falsifications.
The court sentenced us to 4,5 years of imprisonment each.

We who disagree with the verdict sent the documents to the Supreme Court of the Russian Federation. But, having familiarized with the protocol of all court sessions, we made sure that in Russia our “justice” faithfully observes and executes the ORDER, but not the Law. All the protocols were altered, falsified in accordance with the requirements of the ORDER in a clearly accusatory direction.

Apparently, not counting on our side every word will be recorded during the court sessions, demonstrating a complete disregard for the Law and unshakable confidence in personal invulnerability for the actual falsification of court documents, physical evidence.

And presiding judge Milled D.The. simply rejected all our observations on these falsified protocols, based on the results of the study of which the Supreme Court must pass its accusatory or acquittal verdict.

The circle of absurdity closes. Why, then, eight months went to these court sessions, which confirmed the lack of evidence and the absurdity of all the charges against us?

Which once again proves that in Russia now there is no justice of the Law.

The law is not fulfilled, there is an ORDER that must be fulfilled, no matter what. This confirms that in modern Russia repressions for dissent have resumed an honest expression of their citizenship and, most importantly, disagreement with the line of official authority. In fact, we were imprisoned for the fact that we, speaking publicly for preserving the foundations of the constitutional system, dared to criticize the activities or inaction of the authorities of concrete officials.

We want to wake the society with this letter-statement, to reach the consciousness and heart of every citizen of Russia and remind you that we are the ones who elect the authorities, and she (they) are obliged (obliged) to listen to the opinion of civil society.

We also intend to preempt the authorities from repeating the mistakes that were made in Soviet times against prisoners of conscience — academicians Sakharov, Bolotov, the writer Solzhenitsyn, and many others.

We consider it necessary to convey this idea to a society in which the most honest and active citizens would not be prosecuted under criminal articles by special services with the sole purpose of pleasing the authorities.

Citizens of Russia should have the right to openly express their civil position, which is guaranteed by the Constitution of the Russian Federation.

We do not need to reaffirm our commitment and care for the Motherland, in the name of which we have given our strength and health, being almost 2 for the year in prison dungeons for dissent and criticism of the authorities - specific government officials.

We will not give up and do not retreat from our civil position, what would it cost us, as our grandfather-great-grandfathers had to say, “There is nowhere to retreat — Russia is ours”.

Our only desire-goal is for all citizens of our Russia to live a dignified life, and not just crooks who seize upon power. What would our Russia was a powerful, great, prosperous Power.

Every day, being in prison dungeons, there is only one thought and intention in our hearts: for our beloved Russia to be great, powerful and independent.

We appeal to every citizen of Russia!

Wake up Do not remain indifferent and indifferent to the fate of our Motherland, your future, your children and grandchildren. The people are obliged to declare to the authorities the need to faithfully fulfill the law by everyone from the street bum to the president, the strict observance of the principle of equality before the law of all WITHOUT EXCLUSION Stop the monstrous corruption, the collapse in all spheres of life and livelihoods.

Only the blind can not see that the weak Russia will be instantly torn up by its enemies (currently listed as our strategic partners) and our children and grandchildren will be doomed to poverty, which today has at least a quarter of the country's population.

The country is the richest in the world in natural resources, the country in which one of the most beggars is the People.

Give your vote in support of the fact that the government should change its attitude to what is happening, and not throw in jail those who dare to openly and publicly criticize it.

Express your citizenship in the Internet forums, on the website of Colonel Khabarov L.V., in the media or in any other accessible way, inform your relatives, relatives, colleagues and friends. Let the authorities hear the opinion of the people.
God bless you!

Sincerely yours, Col. L.V. Khabarov and the scientist-inventor VS Kralin.

25 April 2013 will take a direct line with President Putin.

Everyone who supports Leonid Vasilyevich should try to call and ask a question about all this outrage.
- Falsification of the FSB criminal case.

It is necessary to tell him live, if he doesn’t know what kind of lawlessness his power structures are doing, and the prosecutor’s office and the judges cover and support this. All documents confirming this are on the site http://leonid-habarov.com/ in the section "news".

The number for which questions are being asked for Putin, the same for residents of all cities 8-800-200-40-40. Questions are accepted by phone 24 hourly.

Number for free SMS messages to Putin: 0-40-40. The message must be in Russian and no more than 70 characters long.

The address of the site where you can also ask a question to Putin: moskva-putinu.ru or moscow-putinu.rf (choose a section titled “Ask a Question”). The message must be in Russian.

I have the honor, Guards. Major Dmitry Khabarov.

Ctrl Enter
Noticed oshЫbku Highlight text and press. Ctrl + Enter
We are
"All the criminal case of a" military coup "in Russia rests on the provocation of the FSB"Do not plant those!
167 comments
Information
Dear reader, to leave comments on the publication, you must to register.