April 26 2013
50
The Boston script has no final yet. There are no motives for the crime, official statements are implausible. The number of dead indicates amateurs. 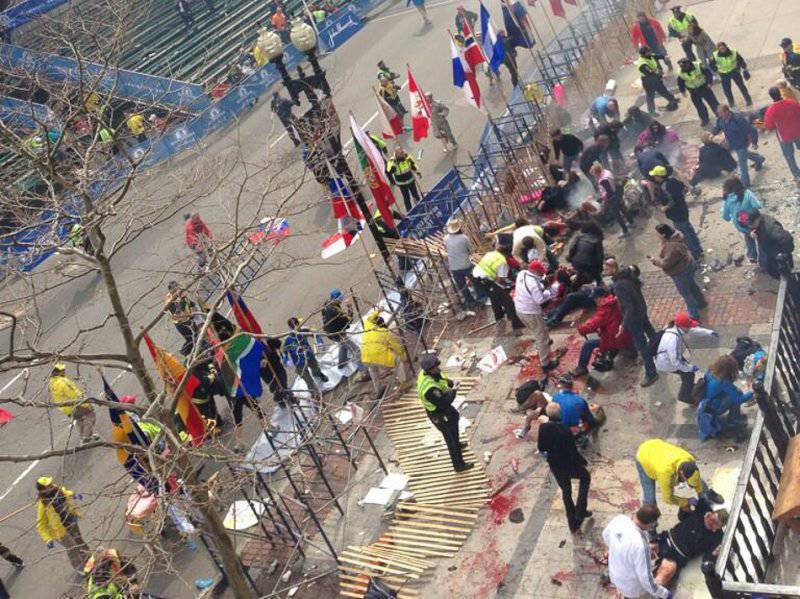 But let's try to draw an analogy, look not behind the curtain, but forward: guided by the trends of today. The first loud attack: the twin towers. It looks like an advance report to taxpayers - a reason to fight al-Qaeda, the invasion of Afghanistan, the elimination of Bin Ladan.

The reason for which can serve as a terrorist attack in Boston?

1. Officially, on the TV screens, we see that the bombers are Chechens.
2. Conclusion: terrorists may come from Chechnya, and they can look like real Americans. Study well, get grants.
3. What to do with it? And here, two options, absolutely opposite, two lines of development of events.

One line - this is a negative attitude towards Russia, whose government cannot destroy the center of terrorism in all these long years, it allows it to be exported. Kadyrov is indirectly to blame, consequently, Putin.

Second line seems more likely, especially said about the request of the FSB for his older brother.

There will be statements by the White House that Russia is fighting against terrorism in Chechnya, the fact that this terrorism is fueled from outside, by Al-Qaeda, that efforts must be united.

Chechnya, from being freely determined and fighting for independence through guerrilla warfare, becomes a common headache, a cause for cooperation. At the same time, funding for gangs in the Caucasus, from London and the United States, stops, and it stops as quietly as it began. At the same time, the Western media give a positive assessment of Russia in the light of the fight against terrorism.

And, for what, is this all you ask? For the upcoming talks of the presidents of the United States and Russia. This is an additional lever of pressure, an incentive to refuse to support Syria. For this, Russia is promised: a calm Caucasus, a “good” Olympiad, a “soft” Tbilisi. If Russia refuses to "merge" Syria, then the opposite is true: the support of the militants is increasing, and the entire Middle East is blazing, with all the ensuing consequences. There will be refugees from Iran, the claims of Azerbaijan and Turkey, the removal of the Caspian shelf.

To this I will add a version about the involvement of two brothers. The elder brother, the Wahhabi, was used in the “dark”: they sponsored with money, planned actions and simply led. He should have an assistant, like-minded person. This role was performed by the implemented agent, if you take the terrorist attack for a dramatization. Therefore, it was not taken alive.

The younger brother did not take part in this, although he knew about the mood of his older brother. Therefore, they took him alive. The older brother was simply set up, and handed over to the authorities, he apparently did not expect it. If he ever blew up these pressure cookers. He could simply be invited under the pretext. Any agent of any special service could do this.

Ctrl Enter
Noticed oshЫbku Highlight text and press. Ctrl + Enter
We are
Revealed the secret of provocation in the American BostonInterview of President Bashar Al-Assad to the Sunday Times newspaper
50 comments
Information
Dear reader, to leave comments on the publication, you must to register.