April 25 2013
26
A few years ago, an unremarkable tank stood in the back of a tank firing range in Kubinka. From the characteristic outlines of the hull, tower and chassis, it was possible to recognize the T-80, which had been in mass production since the mid-seventies. However, this particular instance was of great interest to people interested in Soviet armored vehicles. A closer look at the armored vehicle showed that the engine exhaust pipes were located not on the stern, but on the port side. In fact, only this sign said that there was a non-standard serial T-80 at the test site.


The abandoned and rusting machine was a prototype of the Project 219RD project, which appeared at the very end of the seventies. Adopted shortly before the T-80 had good characteristics, which were provided by a gas turbine engine with a capacity of 1000 horsepower. However, the cost for a relatively high speed and ease of use in winter conditions was too high fuel consumption. The power reserve of the T-80 was significantly less than that of other Soviet main tanks that time. In addition, a gas turbine power plant cost an order of magnitude more than a diesel engine of similar power. Therefore, already in the late seventies, the Ministry of Defense initiated the development of a tank modernization project, the purpose of which was to maintain the driving performance of the armored vehicle, while simultaneously increasing fuel efficiency and reducing the cost of the finished tank.

At this time, the designers of the Chelyabinsk Tractor Plant were working on creating a family of tank diesel engines 2В. It was planned to make several four-stroke X-shaped engines with power from 300 to 1600 horsepower. It was the engine of the 2B family that was chosen as a power plant for a new modification of the T-80 tank, called the “219РД Object”. With the development of new engines was remarkable история. Initially, in the 1976-77, at ChTZ, an 16-cylinder diesel engine with a capacity of 1000 hp was designed. However, by the time the design work was completed, it turned out that the defense industry does not need such an engine. All tanks in which he could work, were already equipped with other types of engines. Therefore, based on the resulting 2B-16-1, they began to create more powerful 2В-16-2 with maximum power up to 1200 hp.

Using the 2B-16-2 engine, Chelyabinsk engineers created the MTU-2 engine-transmission unit, which was an engine and transmission assembled into a single unit. This approach to design was used for the first time in Soviet practice. Of the other features of the installation should be noted hydrodynamic transmission, electro-hydraulic control system, the original cooling units, as well as air filters. A monoblock propulsion system occupies a total volume of 3,6 cubic meters.

In the early eighties, one of the production tanks T-80B underwent alteration, bringing to the state "Object 219РД". He was removed from the original power plant with a gas turbine engine, which took the place of the unit MTU-2. The monoblock engine transmission showed itself well at the installation stage. During the check of maintainability of the tank with him, a team of four repairmen was able to replace the engine and transmission in just 65-70 minutes. It is worth noting that not only Leningrad designers from the Kirov factory who created the “Object 80РД” were engaged in the modernization of the T-219B. At the same time, the Chelyabinsk Tractor Plant was designing the tank “Object 785” with a similar power plant. A characteristic feature of the new Chelyabinsk experimental tank has become a longer hull with seven support rollers on board. Only one instance of such an armored vehicle was built, mass production did not start.

The “219РД object”, which received the new power plant units, turned out to be slightly heavier than the original T-80B and weighed almost 44 tons. Due to the fact that power in 1200 hp was the maximum for the engine 2В-16-2, the driving characteristics of the new tank were slightly lower than the base model. The maximum speed of the “Object 219РД” decreased to 60-65 kilometers per hour, which, however, was compensated by a large power reserve. Because of the less voracious diesel, he was able to overcome at one gas station about 500 km.

The 219РД Object converted from the standard armored car corresponded in all respects the T-80B, not counting the units of the engine compartment. The tank retained the combined armor based on rolled sheets. Due to a slight increase in engine power, the undercarriage also did not change: the former six track rollers with a torsion bar on each side remained. Complex arms "Object 219RD" consisted of a gun-trigger 2A46-2 installation with antitank missiles launching complex 9K112-1 "Cobra", two guns (zenith NSVT 12,7 mm caliber and coupled with the gun 7,62-mm FCT) and smoke grenade. The use of armaments was provided by the 1А33 fire control system, coupled with an armament stabilizer, a ballistic computer, a laser rangefinder, etc. In general, the weapons and electronics of the pilot tank corresponded to the set of equipment installed on the T-80B of the early series. 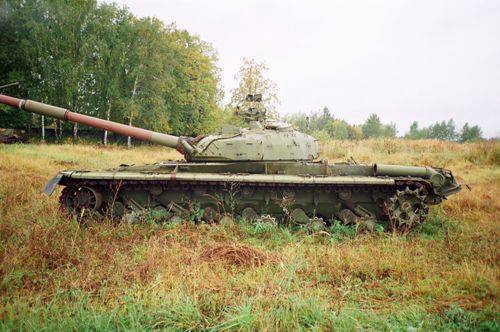 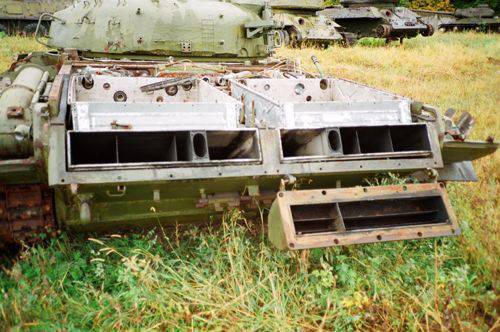 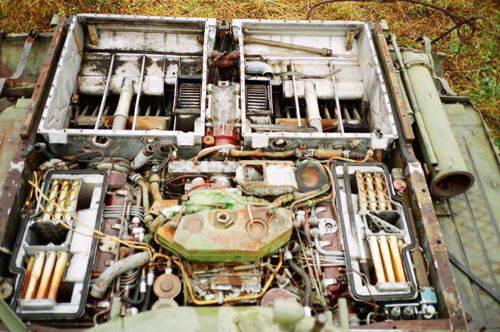 The remains of the Object 219РД in Kubinka

In the mid-eighties, several samples of the 2В-16-2 engines underwent interdepartmental tests, during which each of them worked over 700 hours. At the same time, the ground tests passed the prototype of the “219RD Object”. During the trips to the tankdrome, the armored car almost completely consumed the resource of the engine installed on it. Feedback from testers and customers was generally positive. The lower maximum speed was more than offset by a large power reserve and a significantly lower cost of the diesel engine. However, the fate of the project decided not technical and non-economic features.

The project “Object 219РД” was primarily affected by the views of the military. This tank was considered only as a replacement for the T-80B in case of the need for rapid deployment of mass production. In addition, the relevant departments were not in a hurry to prepare the industry for the production of the new 2В-16-2 engine, and the Chelyabinsk Tractor Plant itself could not master its mass assembly due to its capacity utilization. The end of the history of this engine, and with it the project "Object 219РД" became a few documents issued by the leadership of the defense industry. In 1988, the 2В-16-2 diesel engine and the MTU-2 installation were recommended for serial production, after which all the documentation went to the archive.

Soon after, the customer, represented by the Ministry of Defense, attempted to preserve the 2В engine family and, possibly, the “Object 219РД” tank. Chelyabinsk Tractor Plant ordered the development of a unified power plant for all existing tanks. The 12 X-cylinder 2В-12-2 engine, whose power was brought to the level of the previous 2В-16-2, was taken as a basis for it. However, in the future, the military abandoned these engines. Updating the fleet of armored vehicles was considered unprofitable, as a result of which all the documents on this project also went to the archival shelf. The 2B engine family still exists, but even after 25 years after those events, it was not widely spread.

The tank “Object 219РД” was sent to storage as superfluous. A couple of years ago, photographs appeared in free access, in which the state of the useless experienced armored vehicle was captured. The abandoned tank made a sad impression: some parts were missing, while others were covered with rust. Thus ended one of the attempts to equip the T-80 tank with a diesel engine. It is worth noting that this idea further bore fruit in the form of the main battle tank T-XNUMHUD "Birch". However, this development was not destined to serve for a long time. By the end of the nineties, all the “Birches” of the Russian armed forces were decommissioned due to technical problems.

Ctrl Enter
Noticed a mistake Highlight text and press. Ctrl + Enter
We are
Open Day in KubinkaMiddle tanks in the postwar period. "432 Object"
26 comments
Information
Dear reader, to leave comments on the publication, you must to register.