On the basis of "Almaty", it will be possible to create a training tank

April 25 2013
44
In December 2012, Russian Deputy Minister of Defense Yuri Borisov announced that in 2014 the military department intends to place an order for the purchase of a pilot batch of 16 vehicles on the new Armata platform. On the basis of this batch, experimental military operation will take place. tanks. The current schedule stipulates that Uralvagonzavod will create the first prototype of the promising MBT by the end of 2013, and it will be possible to begin deliveries of new vehicles to the army already in 2015. The technical design of the Armata heavy unified tracked platform was approved in March 2012.


A new unified platform for heavy armored vehicles is being created to replace existing OBTs in the armies: T-72, T-80 and T-90 of various modifications. It is already known that a main battle tank, an armored personnel carrier, an infantry fighting vehicle, as well as various auxiliary tracked vehicles will be created on the basis of "Armata". MBT "Armata" will receive a fully digital SLA, as well as an isolated armored capsule for the crew. The turret of the new tank will be made uninhabitable.

Earlier on the radio station "Echo of Moscow" CEO of "Uralvagonzavod" Oleg Sienko said that the plant is also engaged in the creation of remote-controlled armored vehicles. Already in 2013, the company expects to partially demonstrate the individual capabilities of these combat vehicles, which can be controlled from the iPad or iPhone. Oleg Sienko noted that the engineering equipment with remote control at the enterprise had already been tested and satisfied with the results obtained. 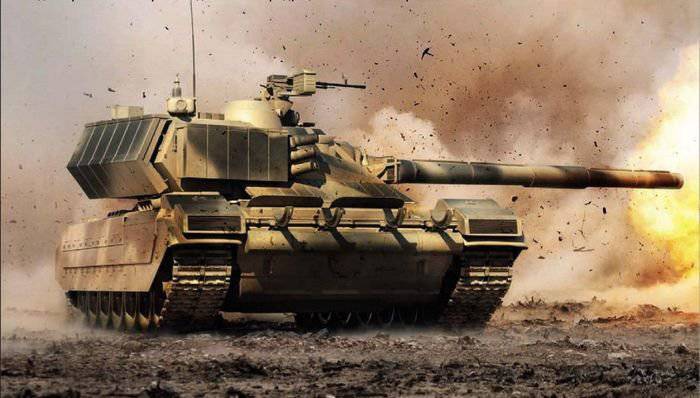 It is assumed that the MBT from the Armata family will significantly surpass all combat vehicles in this class. Perhaps there will be a qualitative leap, which Russian tankers have been waiting for about 20 years. At the same time, a new, significantly increased price of equipment will most likely require a higher level of personnel training, as well as maintenance and operation. Therefore, along with the new tank, modern means of personnel training will be massively delivered to combat units: training manuals, simulators and mock-ups.

It is known that even the most modern electronic simulators cannot completely replace the work in a real tank. On the other hand, to give for learning (“to kill”) a modern MBT worth hundreds of millions of rubles is not the right decision from an economic point of view. At present, in the Russian army, in the role of training tanks, old models of cars are widely used, for example, the T-72, released back in the 70 of the last century. These tanks, soldiers-conscripts mercilessly drive on the tankdromes until they fully use up the service life, after which they are sent for recycling. The benefit of the USSR inherited a huge number of tanks from Russia.

Also in Russia quite actively for the training of crews of tanks and infantry fighting vehicles are used a variety of dynamic simulators. Dynamic simulators for the crews of the T-72 and T-90 tanks, which are a training tool for training the combat skills of the gunner operator, the commander and the driver in the classroom, are widely used. These simulators include tank crew jobs, mounted on a special dynamic platform, as well as an instructor's workplace. 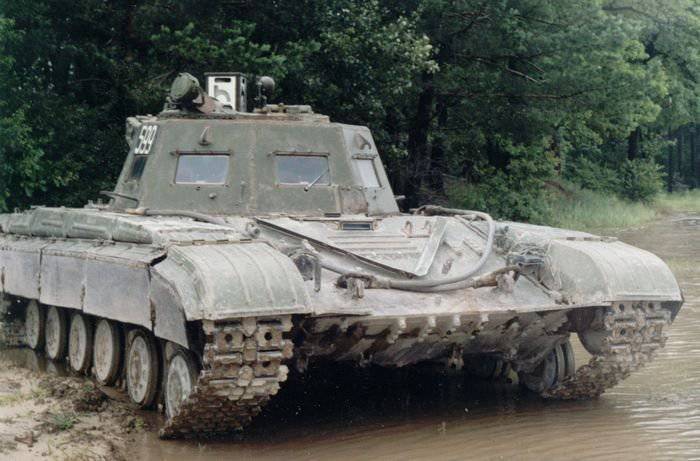 HTV-64 - running driving simulator
The use of training simulators for tank crews allows reducing the time and cost of training mechanics-drivers, gunners and commanders of the OBT, as well as reducing the consumption of fuel and lubricants, the service life of tanks, and ammunition in educational institutions and training units of the troops. Modern simulators provide the effect of presence, which occurs in the learning process. This allows us to achieve a maximum approximation of the training conditions to the working conditions of a real tank crew. Modern cabins of the trainee completely imitate the workplace of the tank driver as regards the placement of viewing and instrumentation, controls, forces and moves on the tank controls.

However, no matter how realistic simulators are, they cannot completely replace training on a real tank. If we talk about OBT "Armata", then the new combat vehicle of the ground forces because of its novelty (accommodation of the crew in a separate armored vehicle, the use of a new transmission, new controls and control devices) will require new teaching aids. The stocks inherited from the USSR equipment will not help here.

For quite a long time in the USSR and abroad, experience was used in the creation of running simulators for tank driver mechanics. For example, in the Bundeswehr, such cars began to be created in those years when the Leopard-1 tank was adopted by the German army. At the end of the 1970-s with the introduction of the German army MBT "Leopard-2" German designers did not abandon this idea and developed running simulators for training future tank crews. 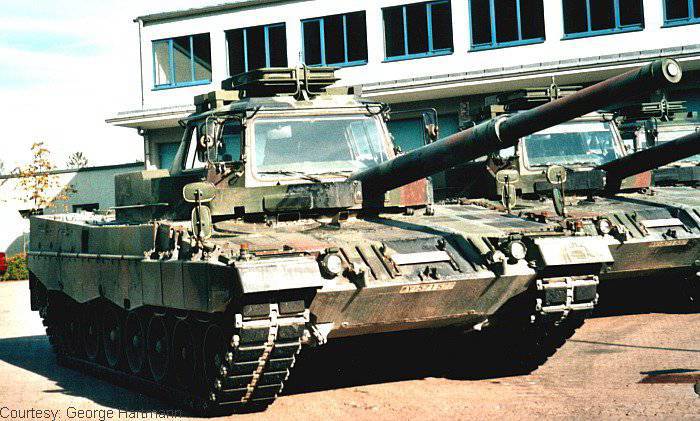 Undercarriage driving simulator based on the tank "Leopard-2"
Similar work was carried out not only in the Federal Republic of Germany, but also in the GDR. Where running simulators were created on the basis of the Soviet tank T-72. In turn, the USSR engaged in these works a little later than abroad, but managed to create a whole family of driving simulators (HTV) - HTV-55, HTV-64, HTV-72 and HTV-80. At the same time, a simulator of a tank gun was available only on the HTV-64 model, it was absent on other training tanks. The collapse of the USSR stopped the work that was carried out in this area, they did not receive further development. And there was no special need for this. Thousands of tanks accumulated on the bases of storage of military equipment, which in principle could not be pitied.

Only in Kurgan a new chassis simulator of the BMP-3 driver was created, since this enterprise produced them in large quantities for export. This simulator was designed to work out the driving skills of the BMP-3, as well as the machines built on its base, at any time of the day, on land and afloat, with the possibility of an instructor interfering with the learner’s actions. The running simulator was equipped with a cabin, as well as all the necessary equipment: built-in dozer equipment, automatic fire extinguishing system in the engine compartment, internal and external communications, an additional heater.

It is likely that something similar will be done on the basis of the Armata platform, which should become the basis for all heavy tracked combat vehicles. Since the tank will be training, its cost can be significantly reduced. On the training tank there is no need for dynamic protection, multi-layered armor, gun, full-fledged SLA. Features of the layout of the new tank (placement of the crew in the capsule) is a great benefit for the training of tankers, as the instructor sitting next to the driver-mechanic will be able to better control the learning process. In the same capsule it will be possible to equip training places for other tank crew members. At the same time, electronic consoles that imitate the target situation can be embedded in the mock-ups of sights. In this case, the learner could see in the sights a variety of purposes. 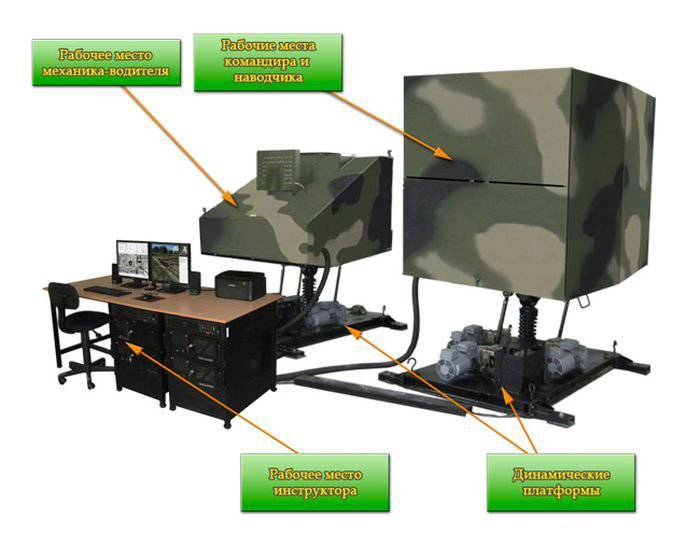 T-72B Dynamic Crew Trainer
To increase the realism of the learning process, new running simulators could be equipped with laser simulators of firing and destruction, which would allow playing full-fledged bilateral tactical exercises between units. All this would play a positive role in the training of tank crews, saving the resource of combat vehicles and increasing the safety of training. So, the likelihood that training tanks on the base of “Almaty” will appear at Russian landfills and tank divisions can be considered non-zero, such tanks can really be needed.