April 25 2013
83
During the last week it became known about several international projects involving Russia. In the near future, our country will begin to cooperate with several friendly states in the field of training the personnel of the armed forces, and with several already it carries out such activities. Training centers with Russian participation will work in the countries of Southeast Asia and Latin America. Their task will be the training of soldiers and officers of the ground forces, air forces and naval forces of several states. 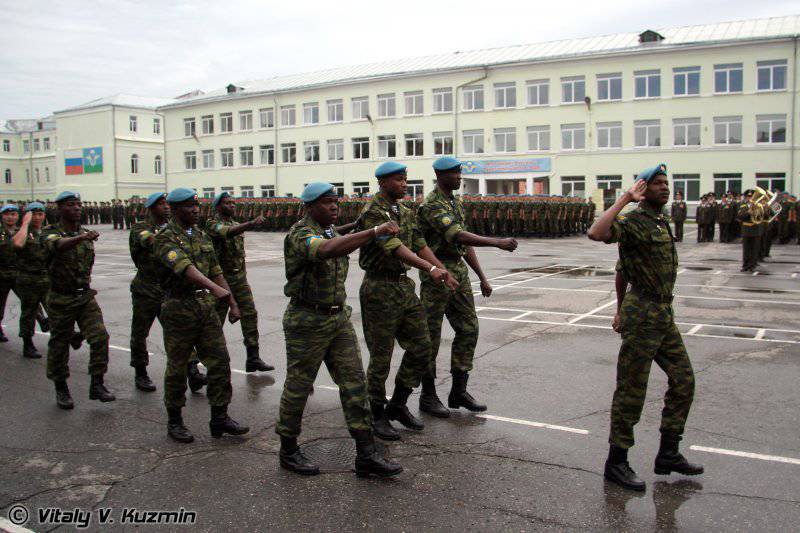 Earlier, the highest circles of the Russian Ministry of Defense claimed that Russia would help Vietnam in the construction of its underwater fleet. Then, such statements concerned only the construction and supply of submarines for the Vietnamese Navy. Now, Interfax-AVN, citing a source in Russian shipbuilding, writes that cooperation between Russia and Vietnam concerns not only the construction of submarines themselves, but also facilities for training their future crews. According to the source, two buildings have already been built, which will house a new training center, and now finishing work, laying of communications, etc. It also became known that in one of the buildings of the center they will install the equipment necessary for training sailors in the struggle for survivability and the use of rescue equipment. In the second building, it is planned to mount a certain complex simulator, first supplied by Russia.

The exact composition of the equipment of the new training center was not named for obvious reasons. At the same time, it is known that the project of the center was created in the NGO Aurora. This enterprise also produces the necessary equipment. Also, information was received in open access, according to which soon, with the start of installation of equipment, Vietnamese instructors and teachers, who are currently completing their studies in Russia, will start working at the center. Installation and commissioning of the equipment will be carried out jointly by Russian and Vietnamese experts. Specific dates for starting a new training center have not yet been announced.

Another similar international contract will unite the efforts of Russia and India. The latter is preparing to put into operation a new aircraft carrier “Vikramaditya” with a group of MiG-29K and MiG-29KUB aircraft and therefore intends to deploy mass training of deck pilots. Last Saturday, MiG RSK and the Indian Ministry of Defense signed an agreement on joint training of deck pilots aviation. The first phase of pilot training will begin a few months before the transfer of the aircraft carrier to the customer. Further, after the transition of Vikramaditya to its new base, the second stage starts. First, future pilots of deck aviation will study in Russia, and then they will go to their homeland, where they graduate.

Already, experts from both countries are building a training complex in India, where pilots will undergo the second part of the training. According to S. Korotkov, Director General of RAC "MiG", along with the aircraft carrier this year India will receive four deck fighters. Thus, the total number of deck Migovs in the Indian Air Force will be 24 units. After all the existing contracts have been completed, the number of MiG-29K and MiG-29KUB will increase approximately two times. In this connection, it is planned to start a joint pilot training project.

While Russian, Vietnamese and Indian specialists are only working on the creation of two training centers, another similar facility was opened in Nicaragua. During the recent official visit of the Russian delegation in this country, the opening ceremony of the Armed Forces Training Center took place. When the brigade named after General Augusto Cesar Sandino, an educational center of the Army named after GK was opened. Zhukov. The new center was built with the active assistance of Russian specialists, who took upon themselves the development and production of most of the equipment. In particular, the Training Center is equipped with several computer classes, target fields and simulators of various types.

The opening ceremony was attended by the head of the Russian delegation, Chief of the General Staff V. Gerasimov. He noted the symbolism of the names of the land brigade and training center. And A.S. Sandino, and G.K. Zhukov, he said, were the real patriots of their countries and did everything possible to protect their homelands.

Another joint Russian-Nicaraguan project aims not to train specialists, but to dispose of ammunition. The Russian delegation also visited the opening of the new plant, which will be destroyed old shells. In the coming years, it is planned to dispose of at least 900 tons of artillery ammunition with expired shelf life. To extract fuses from projectiles of all types, a special platform has been equipped located at a distance from the main workshop. Recyclable shells will become a source of scrap metal, including non-ferrous, as well as explosives for industrial needs. Now explosives for the mining industry are purchased abroad, and in the future, the Nicaraguan government hopes to close this niche through the disposal of ammunition.

It should be noted that Russian specialists took an active part in the construction of the recycling plant. Our country has extensive experience in the destruction and processing of artillery shells. Specialists of the Mikhailovsky Artillery Academy took part in the development of production and training of Nicaraguan specialists who will operate equipment received from Russia.

During the Latin American tour, the Russian delegation also visited Cuba, but from there there were no reports of new treaties in the field of military-technical cooperation. Russian military and government officials visited several facilities of the Cuban armed forces, laid wreaths at the memorial of the country's heroes, and also took part in international negotiations with representatives of the Cuban military department. Nothing is known about the signing of new international agreements, but there is every reason to believe that such news will appear very soon. It may be confirmed by information according to which Cuba and Russia plan to engage in the reconstruction of the H. Marty Airport in Havana and make a full-fledged international hub out of it.

The latest news confirms the fact that Russia is capable of exporting not only finished equipment, but also to benefit from participating in international military-technical projects. The creation of training centers in Vietnam and Nicaragua, as well as the construction of a plant for the disposal of ammunition may well be the first steps in expanding the scope of cooperation with these states. Vietnam, Nicaragua and Cuba are actively developing and therefore are of great commercial interest for Russian and foreign organizations. India can be attributed to developed countries, because of what it turns out to be a no less attractive client for defense enterprises.

Ctrl Enter
Noticed a mistake Highlight text and press. Ctrl + Enter
We are
The state and prospects of development of the naval forces of Romania (2013)Military doctrine of the Russian Federation
83 comments
Information
Dear reader, to leave comments on the publication, you must to register.