The Chinese have not found human rights in the USA 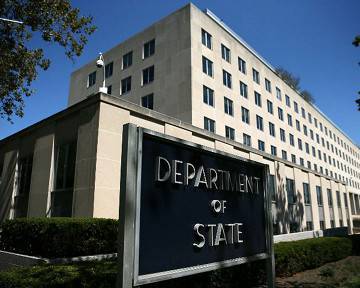 April 19 went online to the next volume of the State Department's boring journalism: “Country Report on Human Rights Practices” for 2012 year. The authors of the document, who still can’t get bored with a carbon copy, did not tell the world community anything new. All the same countries, all the same violations and disgraces with the rights of Homo sapiens - against the background of the complete well-being of the rights of Homo erectus in the United States. If you make a report and compare the "indicators", you should have a standard. Life somewhere in Washington or New York, or, say, in Detroit or Boston, seems to be the State Department's ideal of respecting rights, freedoms and everything else associated with a great country, territory of freedom, earthly paradise and a subject of lust for all those unfortunate, who else has not settled there.

Comrade Dolgov made it clear that the State Department report "suffers from the same shortcomings that have characterized previous similar reports." In the opinion of the Russian Foreign Ministry Commissioner for Human Rights, Democracy and the Rule of Law, the most serious flaw in the report is “frank abuse of humanitarian and human rights topics in favor of US political interests, selective standard assessments and active use of double standards.” Comrade Dolgov also points out that “some of the authors’s controversial conclusions” are based on sources whose origin is “not always clear.”

Of course, the Russian Foreign Ministry could not pass by the Russian part of the State Department document. According to K. Dolgov, the American partners do not want to notice the large-scale work carried out by the Russian leadership in improving the political and judicial systems, reforming law enforcement agencies and correctional institutions, as well as in the fight against corruption.

Special perplexity of the Commissioner was caused by the American passages about the “conflict” that is taking place in the North Caucasus between the federal military, the “rebels”, the radical Islamists and the criminal structures. This conflict led there to numerous violations of human rights and gave rise to "an atmosphere of impunity."

Dolgov reminded the State Department that in the North Caucasus region of Russia, law enforcement agencies are confronting the terrorist threat, which, "as the recent tragic events in Boston show, is also relevant for the United States of America."

In conclusion, the author of the commentary stated that “such a frankly politicized substitution of concepts, reflecting the ongoing attempts to interfere in the internal affairs of Russia, is categorically unacceptable and does not do credit to the authors of the report.” The Russian Foreign Ministry is counting on “to continue on more objective and balanced approaches of the American side in the field of human rights”.

But not only the Russians did not like the typical Gosdepov report. The Chinese also looked critically at this document.

As the "CRI online"22, April in Beijing, the official representative of the Ministry of Foreign Affairs of the PRC, Hua Chuning, stated that the US human rights report is biased and is a demonstration of "double standards" in the area of ​​human rights observance.

Comrade Hua Chuying noted that in the thirty years of its reform and opening up policy, China has achieved notable success in the area of ​​human rights. A spokeswoman for the Chinese Foreign Ministry also said that no country in the world can talk about their ideal position with their human rights.

If in Russia the Foreign Ministry limited itself to the harsh statement of Comrade Dolgov, then the Chinese government went further. It published its report on the situation of human rights in the United States. Uncle Sam's brochure in the star-and-striped top hat.

Announced these materials, the press office of the State Council of China 21 April. The document on the state of human rights in the United States in 2012 was a response to a report published by the US State Department.

As noted in the Chinese document, writes XinhuaThe US government, which considers itself a “defender of human rights”, in the published report unreasonably criticized over 190 countries and regions of the world, including China, but closed its eyes to the problems existing in the field of human rights in their homeland.

The Chinese report reveals US problems in six aspects in the field of human rights: life and personal security, civil and political rights, economic and social rights, racial discrimination, the rights of women and children, and violations of the human rights of other countries.

1. Racial discrimination in the United States. The political, economic and social rights of members of national minorities are not guaranteed equality.

A part of voters of Asian origin in the presidential elections held in 2012 year met obstacles during the voting. Representatives of the UN Human Rights Council have accused the United States that the right to vote of American voters of African and Latin American origin was not fully ensured.

Also racial discrimination is present in the field of employment. According to US Department of Labor statistics, in October 2012, the unemployment rate among “white” citizens was 7,0%, African Americans - 14,3%, and Latin Americans - 10,0%. According to the same statistics from the US Department of Labor, in 2012, about half of the blacks living in New York were unemployed.

According to the US Bureau of Labor Statistics, in 2011, about two thirds of the lowest paid jobs were women.

In the 2011 year, according to statistics, in the United States, the poverty rate for women reached 14,6%. For comparison: among men, the same indicator was 10,9%. Retired women often join the ranks of the poor.

Moreover, American women face the threat of violence and sexual harassment. This mainly concerns those who serve in the army.

3. The United States is responsible for many wars. The United States launched the greatest number of wars in foreign countries after the end of the Cold War. Military operations in Iraq and Afghanistan have led to massive casualties and injuries to civilians.

From 2007 to July 2011, according to the United Nations Assistance Mission in Afghanistan, at least 10292 citizens became victims of the war in this country.

As for Iraq, from 2003 to August 2011, the war there claimed 11500 lives. Military operations led to environmental disaster. After the war in Iraq, there has been an increase in the birth rate of children with developmental disabilities.

At least 484 Pakistanis died from 2004 of the year to June 2012 of the year as a result of military attacks by the American army. This includes 168 children.

According to the US Department of Labor, in April 2012, the unemployment rate was 8,1%, and the number of unemployed reached 12,5 million.

Since the beginning of the financial crisis in 2008, the United States has been impoverishing the population. According to the US Census Bureau, in 2011, the poverty rate in the country was 15%, and the number of people living below the poverty line was 46,2 million people.

Over the past years in the United States there has been an increase in the gap between the rich and the poor.

According to the FBI, more than 2011 million violent crimes occurred in the country in 1,2 year. 67,7% serious murders and 41,3% robberies were committed with the use of firearms.

According to CNN, the American population has about 270 million guns in their hands, every year more than 100 thousand people fall into gunfights. In 2010 alone, more than 30 thousand people died from gunshot wounds. According to the newspaper USA Today, in 2011, the number of violent crimes in the United States increased by 17%. According to statistics from the New York Police, on 2 September 2012, 1000 and 1 dealt with shooting in the city, which is 3,4% more than the previous year. In Chicago in 2012, 2460 of such cases were registered (an increase of 10%).

According to the British newspaper The Daily Telegraph from December 16 of 2012, the death rate of American children who died as a result of crimes involving the use of firearms is 25 times higher than in the other twenty major industrialized countries that are inferior in terms of US industrialization.

According to the US National Center for Missing and Exploited Children, at least 100 thousands of children annually become trafficked.

In the United States, there is a serious situation with sexual offenses against children. 5 November 2012 provided the following data on the Prevention of Cruelty to Children website: 20% adult women and 5-15% adult men in the United States admitted that they had been sexually abused in childhood or adolescence. Only in 2010, the 63527 of American children suffered from sexual assault.

However, neither violence against tens of thousands of children, mass killings, frequent shoot-outs, the growth of banditry, the heavy tread of unemployment, or the killings for which the US military machine is responsible, nor gender-based and racial discrimination that flourishes in the States, does not stop the State Department. - one of the heads of the world democratic hydra - from moral sermons on the topic of human rights, regularly violated throughout the world. Violated in one hundred and ninety countries - that is, everywhere except the United States.

Observed and commented on Oleg Chuvakin
- especially for topwar.ru
Ctrl Enter
Noticed a mistake Highlight text and press. Ctrl + Enter
We are
Day district police authorized. The hard work of the most popular policeResults of the week. “We were sincere in our delusions!”
89 comments
Information
Dear reader, to leave comments on the publication, you must to register.