April 25 2013
20
Shortly after the collapse of the Soviet Union, at the dawn of the formation of an independent Georgian army, which, out of habit, was looking towards its “big northern neighbor”, and not overseas, our helicopter squadron had the crucial task of teaching the Georgian pilots Mi-24 to fly.


It must be said that after the collapse of the Soviet Union, many of the republics of the former Union requested a part of the military equipment in ownership, hoping that they were also tax payers of the Union and have the full right to its property. I don’t know how much the division took place there, but Georgians took the X-NUMX Mi-6 helicopters from us later. The truth is that it should be noted that these were the oldest and almost exhausted helicopters.

Well, back to our Georgians. They were collected from civil aviation, where they flew some on the Mi-2, some on the "corncrackers" and not particularly asking for their wishes, they drafted into the Georgian army. And, quite naturally, we began to call them “Mimino” among ourselves. Moreover, it was not far from the civilian “airport”, where the legendary film was shot.

On the first school day, one of Mimino on my helicopter broke the front landing gear and my board was sent to the TEC for repair. And this event saved a lot of my nerve cells. Since the rest of my comrades continued to lose them hard. Mimino forgot to remove or release the chassis in time, instead of the anti-icing system, they included automatic weapons systems, one "ace" for some reason turned off both engines in flight, since our experienced instructor fell while launching them. In short, it was “fun.” 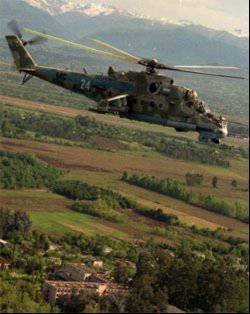 Three weeks later, when Mimino was already flying more or less tolerably, they began to train them in shooting and bombing. Bombs (blanks) dropped directly in the area of ​​the airfield, near the strip. The target was the skeleton of the decommissioned Mi-24. The skeleton was already old and broken, and gaping holes. The first flight, our instructor showed the Georgian "Assam" the highest class: the bomb fell a few meters from the helicopter, jumped up and flew straight into the "target" through one of the holes in its hull.

Then came the turn of Mimino. Bombs fell everywhere, half an hour after the start of flights at the airport there was not a single living soul, everyone hid where they could. With my helicopter I was still in TECH, and this is about 300 meters from the target, and I was not particularly worried about what was happening. In addition to replacing the front desk, we decided to perform several more repairs, so the helicopter was standing in an open area and was all covered with TEC staff.

When the whistle of one of the bombs did not look like the others and sounded more and more distinct from somewhere above, someone shouted “atass” and people began to jump like grasshoppers from a helicopter and scatter in different directions. I saw it all as a slow motion movie. The bomb fell on the concrete in 3-meters from my helicopter and jumped like a frog on the concrete bar away. On this flight that day ended.

After graduation, Mimino flew on our 6-old helicopters somewhere in the direction of Abkhazia, from where they had not returned. And on the fence of our military camp, someone wrote: "Russian invaders, get out!".

Ctrl Enter
Noticed oshЫbku Highlight text and press. Ctrl + Enter
We are
August 2008 of the year. War in the airThe hunt for the Blackbird
20 comments
Information
Dear reader, to leave comments on the publication, you must to register.