The world has a second private space carrier

April 24 2013
10
Last Sunday, April 21, the new American launch vehicle Antares made its first launch from the MARS space center in Virginia. The cosmodrome, located on the island of Wallops, is designed to launch small missiles. The launch of the rocket was originally scheduled for Friday, but 2 was postponed several times, although it went quite smoothly. After 18 minutes after the launch of the rocket, a mass-dimensional mock-up of the Signus container truck was delivered to a near-earth orbit. Thus, in the market of space cargo delivery, the American competition returned to NASA has finally appeared for a long time.


The Antares rocket is intended for commercial shipments of cargo to the ISS. The rocket was designed by American experts, but its Russian engines, the development of more Soviet scientists. Antares is the first private single-use launch vehicle capable of launching cargo up to 5,5 tons to near-earth orbit. During the Sunday test launch, the rocket successfully launched a mass simulator into orbit, which will be replaced in the future by a cargo module that will be docked ISS.

The rocket consists of 2-x steps. The first of them is equipped with 2 Russian oxygen-kerosene engine NK-33. History These engines began over 40 years ago and originates from the Soviet lunar program. For the implementation of this project, light but reliable engines were developed in the USSR that would be able to lift the extra heavy H-1 rocket into space, which was designed to deliver Soviet astronauts to the moon. As a result, a unique engine was developed under the direction of the brilliant Soviet designer Nikolai Kuznetsov, but the H-1 rocket project was closed, and for other missiles of that period, the NK-33 engines were too powerful, eventually dozens of finished engines went to the warehouse instead of the Moon. 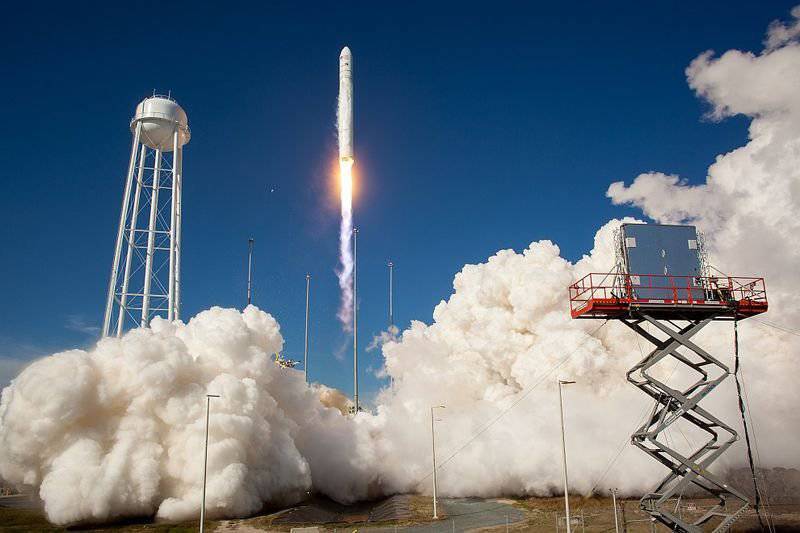 Start rocket "Antares"
At the same time, the characteristics of the engine NK-33 were so good that they could not be surpassed until now. According to Alexander Ivano, Head of the Department of Rocket Engines of OAO Kuznetsov, NK-33 is a very economical engine of a closed circuit. At the same time, Soviet engineers from Samara managed to give it another very good feature - it is very light. Currently, NK-33 is the easiest engine in its class with 150-200 tons. It is very profitable for creators of rockets to use these engines, since they give an increase in the payload being put into space. At the same time, the engine still corresponds to the current level of development of space technology in terms of efficiency.

The second stage of the Antares launch vehicle is already of purely American origin - it is manufactured by ATK based on Castor solid-fuel engines, which are a modification of military missiles of the MX (Peacekeeper) project. The assembly of missiles and control of the entire system is carried out by Orbital Sciences, which also works to build the Singus cargo ship. The total height of the new rocket reaches 40 meters, and the weight of the Antares at the start almost falls short of 300 tons.

The developed cargo ship “Signus” consists of a control module and an airtight container for cargo, the ship is equipped with solar panels. The device got its name in honor of the constellation Cygnus and differs from its direct competitor - the Dragon transport worker - in that it cannot return cargoes from the ISS to Earth. In this regard, its design is much simpler, the “Signus” is a disposable device that will deliver goods at one end, as Russian, Japanese and European transport workers are doing today. 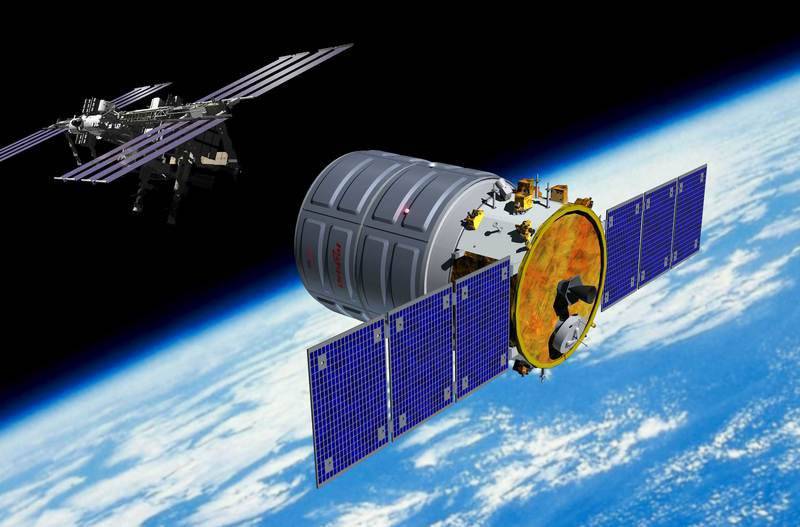 Cargo ship "Signus"
The space cargo ship Signus is planned to be produced in two versions - extended and normal. At the same time in both it will be less than the already created Dragon truck. The Dragon cargo ship allows delivering to the international space station up to 3 tons of cargo in an airtight container and still the same amount in an unsealed one, while the weight of the entire Signus cargo will not exceed 2 tons (in an expanded version of 2,7 tons). At the same time, a cargo ship developed by Orbital Sciences has twice the large hermetic volume, which gives the device some even a specific advantage.

In the first flight of the rocket, the “Signus” role was played by an aluminum model weighing tons in 3,8, which was equipped with numerous sensors and instruments that collect information about flight parameters, including 12 digital thermometers, 22 accelerometers and 2 microphones. The model, which does not have its own solar panels and engines, was launched into orbit with an apogee of 303 km. and perigee 250 km., inclination 51,6 degrees.

Together with the model, the rocket launched the CubeSat standard satellite 4 into orbit. 3 of them were created at NASA and were named "Alexander", "Bell" and "Graham" - in honor of the inventor of the phone Alexander Graham Bell. On these satellites, the role of the onboard computer is played by smartphones running Android OS. The fourth satellite - Dove 1 - was developed by Cosmogia, it will be engaged in shooting the earth's surface.

Back in 2008, Orbital Sciences, as well as SpaceX, received contracts from NASA for delivering cargo to the ISS, with Orbital Sciences having 8 flights. Its competitor, SpaceX, 1 in March, 2013, launched the 2-th scheduled cargo flight to the ISS. If everything goes according to the plans of Orbital Sciences, then the next Antares will be sent into orbit as early as June-July 2013. In the next flight, he will take with him no longer the mock-up, but the cargo ship itself. According to the manufacturer’s company, the cargo, the mass and composition of which are not yet known, is already loaded into the cargo ship “Signus” and is ready for flight.

After performing the 2 test launch of the Antares launch vehicle, it will have to perform another 8 “official” flights to the ISS with a payload on board. The launches are planned to be carried out approximately 2 once a year, therefore, apparently, they will last until 2017-2018's. On the other hand, nothing can prevent NASA from extending this contract if the space delivery service is deemed successful.

In any case, a number of experts believe that Orbital Sciences was a bit late with the launch of the Antares rocket. Its competitor, SpaceX, began launching the Dragon cargo ship almost a year earlier and has already managed to make a successful 2 flight to the international space station. In addition, SpaceX is working on the creation of a module for manned flights. At the same time, Orbital Sciences is not particularly worried about the success of a competitor. Previously, NASA representatives have repeatedly stated that they do not like the monopoly in the space industry, so they are willing to purposefully support competition among companies focused on the production of space technology. In this regard, the Orbital Sciences project has hope for a happy future.