April 24 2013
34
Type 10 is the most modern Japanese main battle tank (MBT). This machine was developed as a cheaper alternative to MBT Type 90 through a thorough modernization of the hull and chassis tank Type 74 and the installation of a tower of a new design on it. The prototype of the new tank was first shown to the public in 2008, and in 2010 it began deliveries to military units of the Japanese Self-Defense Forces. It is reported that the cost of one tank is about 6,5 million dollars apiece. It is planned that over time, this combat vehicle will replace obsolete Type 74 tanks and qualitatively complement the Type 90 tank fleet.


The first show of the new tank took place on February 13 2008 of the year. A prototype of a promising MBT was shown to journalists in the city of Sagamihara at the research center of the Ministry of Defense of Japan. Tank Type 10 has absorbed the most modern achievements in the field of tank building in recent years and was created taking into account the experience of managing local conflicts of modern times. Work on this combat vehicle began in the early 2000-ies, and the individual structural elements were developed in the 90-ies of the last century. The developer and manufacturer of the machine is the company Mitsubishi Heavy Industries.

Tank Type 10 is made according to the classical layout, its crew consists of 3-s people: driver-mechanic, located in the front of the hull, as well as gunner and commander of the car in the habitable tower. This tank is planned to be used in the mountainous regions of the country and in confined terrain. Presented in the city of Sagamihara tank has the following overall characteristics: length - 9,42 m. (With a cannon forward), width - 3,24 m., Height - 2,3 m. The combat weight of the machine is 44 tons, while weight Type 90 - about 50 tons (while Type 10 is shorter in length by 380 mm, in width by 160 mm). Both tanks have the same crew size and are equipped with automatic loaders. The main armament of the tank is an 120-mm smoothbore gun, paired with an 7,62-mm machine gun, and an 12,7-mm anti-aircraft gun can also be mounted on the tank. 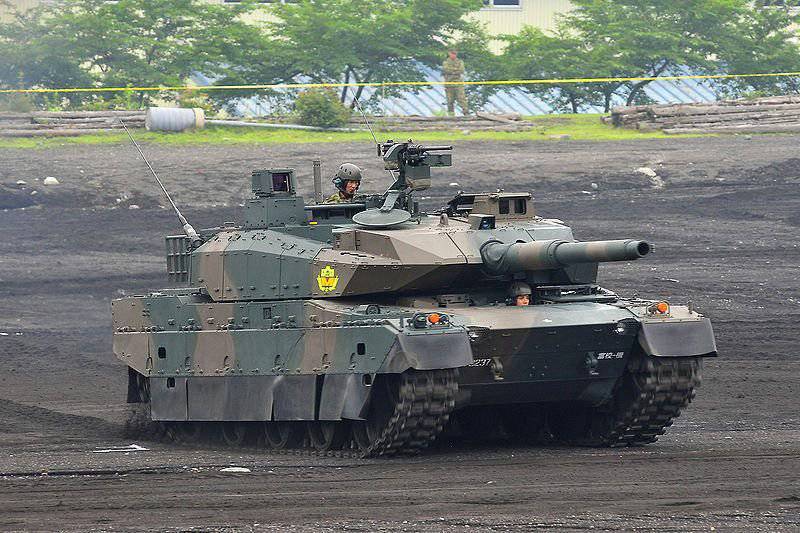 In terms of its appearance, MBT Type 10 is close to such modern Western tanks as the Leopard 2A6 or М1А2 Abrams, however in terms of mass it is closer to the Russian main tanks. The new tank turned out to be quite mobile, it is able to reach speed on the highway to 70 km / h. Like its predecessors, the tank is equipped with a hydropneumatic suspension, which allows you to change the clearance of the car and tilt the tank on the right or left side. Also noteworthy is the reduction in the number of rollers - on the 5 on board (in comparison with the tank Type 90), while the supporting rollers are relatively rarely placed. In general, the appearance of the suspension Type 10 strongly resembles the Type 74.

The main armament of the Type 10 tank is the 120-mm smoothbore gun, which was created by Japan Steel Works (this company produces the 120-mm L44 cannon for the Type 90 tank under license from the German Rheinmetall). Also on the tank can be installed L55 gun or a new barrel length in 50 calibers. The tank is compatible with all standard NATO ammunition caliber 120-mm. In the stern tank niche is a new improved automatic loader (AZ). It is reported that the ammunition of the vehicle consists of 28 shots, 14 of them are in the AZ (tank type 90 ammunition 40 shots, 18 of them are in the AZ). The additional armament consists of an 7,62-mm machine gun paired with a cannon and an 12,7-mm anti-aircraft machine gun on the roof of the turret, which can be remotely controlled.

On the turret of the tank there is a panoramic day and night vision device for the tank commander, which can be easily integrated with the "new Basic Regimental Command & Control System". In comparison with the Type 90 tank, the tank commander's panoramic sight was raised and shifted to the right, which provides better observation and viewing conditions. The modern fire control system, mounted on the tank, allows you to fire at standing and moving targets. The tank is equipped with a navigation system and a digital battlefield control system. 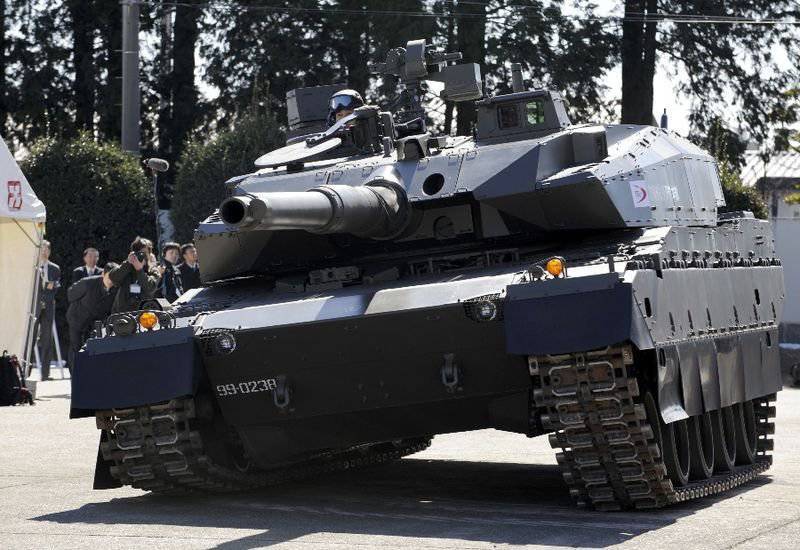 The new Japanese tank has incorporated the most advanced developments in the field of creating tanks. In particular, the machine is equipped with the electronic system C4I - command, control, communications, computers, and (military) intelligence, which combines the capabilities of guidance, control, intelligence and communications. This system allows the automatic exchange of information between the tanks of one unit. According to the assurances of the representatives of the Ministry of Defense of Japan, installed on the tank, the SLA can effectively hit even small mobile targets. This function, along with a modern composite modular booking system, will allow the 10 Type tank to feel equally confident in battle with both armies armed with MBT and guerrilla forces weapons which are anti-tank grenade launchers. In Japan, the "anti-terrorism" potential of the machine is particularly emphasized, as well as its ability to withstand various varieties of the Russian RPG-7.

A great deal of attention was paid to protecting the tank from an RPG during its development. Type 10 is equipped with a ceramic modular composite armor, which is similar to the armor of a German tank Leopard 2A5. The use of a modular booking on the tank has significantly increased the protection of the sides in comparison with the MBT Type 90 and allows for the replacement of protection modules damaged by enemy fire in the field. During the transportation of the tank, additional armor modules can be removed, which makes it possible to reduce the mass of the combat vehicle to 40 tons. The standard combat weight of the tank is 44 tons, with the use of additional booking modules it can be increased to 48 tons. In addition, Type 10 is equipped with an automatic fire extinguishing system (PPO) and a collective protection system (ESD). On the turret of the tank are smoke grenade launchers, which are activated by a signal from the laser irradiation sensors.

The tank has high mobility, which ensures the use of a powerful diesel engine - 1200 hp, power density is 27 hp / t. The tank is equipped with a continuously variable transmission, which allows the car to reach speeds in 70 km / h both forward and backward. Using a hydropneumatic suspension, which allows you to change the clearance and tilt the hull of the tank, increases the permeability of the combat vehicle, and with a decrease in clearance allows to reduce the height and visibility of the tank. Also, this solution can increase the range of angles of the vertical guidance of the gun. 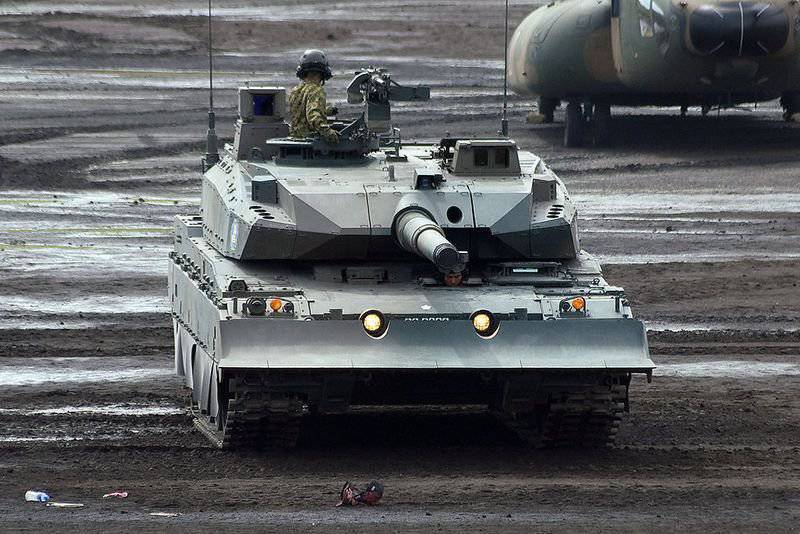 It is worth noting that if the new 10 Type 1989 type tank corresponds to the 90 Type tank adopted in XNUMX, in terms of the capabilities of the MSA and other installed electronic equipment, it must surpass it.

At one time, the main claim of the Japanese military to a tank of Type 90 was its very high cost - about 7,4 million dollars, which is 3 million dollars more than the cost of the American MBT Abrams. Also, they were not completely satisfied with its mass-dimensional characteristics, which prevented independent movement of tanks inside Japan and their free transportation by rail. Due to the relatively large mass of the tank Type 90 (50 tons), its movement on roads outside the island of Hokkaido was fraught with serious problems. Not all bridges could support the weight of this tank. According to the available statistics from 17, 920 bridges of Japan’s largest highways 84% can withstand weight up to 44 tons, 65% up to 50 tons and about 40% up to 65 tons (mass of modern Western MBT).

Based on this, when developing a new tank Type 10, Mitsubishi Heavy Industries listened to the wishes of the military and created a more compact and cheaper version of the tank. The 40-tonne Type 10 was created taking into account the restrictions imposed by Japanese transport legislation. It weighs less than Western MBT and is 10 tons lighter than its counterpart, Type 90. In accordance with Japanese laws that prohibit the use of heavy vehicles in certain areas of the country, the 90 Type could not be used outside of Hokkaido Island, with the exception of a number of training centers. At the same time, the new MBT Type 10 can be transported using the most common commercial trailers. 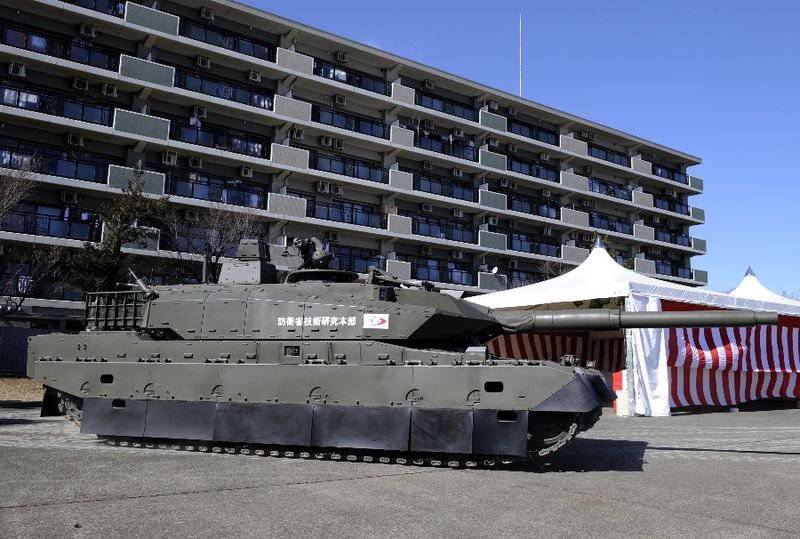 It is reported that from 2010 to 2012 the year the Japanese armed forces acquired 39 tanks Type 10. The first purchased Type 10 tanks entered service in an armored school in Fuji, and the first tank battalion, armed with new tanks, was formed in December 2012 in the city of Comacadcio. Military experts believe that, in the long term, the 10 Type tank can be launched onto the international arms market.