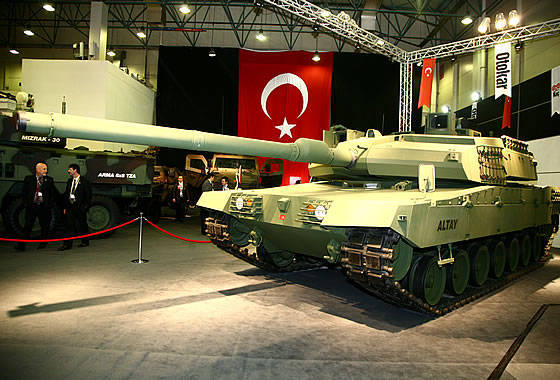 The command of the Armed Forces of Saudi Arabia is considering the possibility of acquiring an arms package in Turkey, the cost of which could be 2 billion dollars.


According to the Tuday Zaman newspaper, the Chief of the General Staff of the Armed Forces of Saudi Arabia, Lieutenant General Hussein ibn Abdullah al-Gabayel (Hussein ibn Abdullah al-Gubayel) during a visit to Ankara last week to discuss the details of a potential agreement with the president Abdullah Gul, the leadership of the Ministry of Defense and the command of the General Staff of the Turkish Armed Forces.

In particular, the delegation of Saudi Arabia expressed interest in purchasing the MALE class unmanned aerial vehicle Anka, developed in Turkey, as well as the main combat tank Altai

Turkey completed the assembly of an Altai MBT prototype in November 2012. As expected, the first production tank will be delivered to the country's Armed Forces by the end of the 2015 of the year.

According to Turkish media, Ankara plans to offer the Altai MBT to the international market at a cost of 5,4 million dollars, which is significantly lower compared to the US Abrams MBT, which is valued at 8,5 million dollars.

Earlier it was reported about the interest of the Armed Forces of Egypt in the acquisition of up to 10 unmanned aerial vehicles "Anka".

According to previously announced plans, taking into account the growth rate of the national defense industry, as well as current and future contracts, the volume of military exports of Turkey in 2016 should reach 2 billion dollars.

Ctrl Enter
Noticed oshЫbku Highlight text and press. Ctrl + Enter
We are
Russia firmly occupies a place in the global arms market 2 and will maintain its position in the foreseeable future.Armored Vehicles Market in the Middle East in 2005-2012 and forecast for 2013-2016
Military Reviewin Yandex News
Military Reviewin Google News
67 comments
Information
Dear reader, to leave comments on the publication, you must to register.