After 15 May, Russia expects a mini-NEP 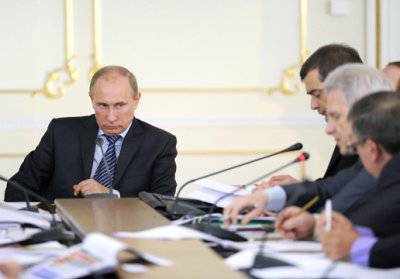 Not so long ago, “Military Review” published material on the deteriorating situation in the Russian economy. Some of our readers met him rather vigorously, bypassing important macroeconomic indicators with their attention, but at the same time stating that the Russian economy would remain as strong as granite even if oil prices fall below the budgeted values. At the same time, the recession of the Russian economy was again connected by some readers with the objective data of the real sector, but, in some incomprehensible way, with the publications of journalists. They say that this is all journalistic hordes are looking for sensations, and therefore publish materials on what is not really.


The position, of course, is interesting, but to agree with it is, at least, naive. If the situation in the Russian economy is really not the most optimistic, then you can blame at least journalists, even the Pope of Rome, Jean-Baptiste Emmanuel Zorg, but the essence of the problem will not change, and the problem itself will obviously not be solved. As the saying goes: you can repeat the word "halva" at least a hundred times, but this will not become sweeter ...

It is noteworthy that President Vladimir Putin did not give what he wished for as real, but acknowledged that a certain negative is manifested in the Russian economy. This suggests that the Russian authorities understand the real price of repeatedly pronouncing the word “halva”, and therefore (I would like to count on it) are switching to an objective assessment of the financial and economic situation in the Russian Federation.

Putin expressed his concern about the possible start of an economic downturn in Russia at a meeting held in Sochi. During the meeting, the topic of how to breathe new forces into the Russian economy was discussed, so that it did not slide into recession. On the hypothetical decline of the economy, by the way, it was not just that. If last year the rise of the economy was fixed at 3,6%, then this year the experts of the Ministry of Economic Development are forecasting a maximum increase of 2,4%. Fears are added by the fact that over the past few days, oil prices have seriously sunk, the level of which today is literally balancing on the budget Rubicon: a little lower, and you want to go to government structures - you don't want to, but you have to curtail one or other programs prescribed in the budget . So, in order to avoid any collapse, Putin decided to listen to the opinions of experts, first in Sochi, and then assemble a mini-meeting already in Moscow.

At the Sochi meeting held, let's say, an assessment of the situation, which describes the current state of the Russian economy. This assessment was presented by the head of the Ministry of Economic Development Andrei Belousov, who unexpectedly for many made a noticeable statement. Belousov said that the problems that have manifested themselves in the Russian economy lately are not generated outside of Russia, but within our country. It is a number of internal factors, according to the minister, that plays a negative role in the development of the state’s financial system.

Such a statement of Belousov is difficult to disregard. In fact, this is the first public assessment by a representative of the government of the Russian Federation of his own activities without any search for those guilty outside the country. Well, what can I say: sometimes we love all “economic dogs” to hang on the machinations of the European Union, China, the USA, the CIS and other territorial associations, and here the minister honestly and frankly makes it clear where to look for the causes of economic negatives.

True, the same Andrei Belousov didn’t continue to engage exclusively in self-lashing, but decided to link the current economic turmoil (virtually zero export growth, rising unemployment, growth in utility tariffs, consistently high interest rates on loans), including the work of former members of the Russian Federation. Cabinet of Ministers.
In particular, the Minister of Economic Development recalled that at one time, Mr. Kudrin promised that if the inflation rate was reduced, the banking sector would go on lowering interest rates on loan programs. However, ”Belousov continued,“ nothing of the kind happened: inflation has significantly decreased in recent years, and the rates are not only not decreasing, but often also rising. It is noteworthy that at this meeting there was also the ex-Minister of Finance Kudrin himself, to whom Belousov indirectly addressed.

A kind of attack Minister Belousov towards Kudrin was supported by President Putin. Here is Putin's phrase:
“... ran into Kudrin. Well, right, not all the same to him to run into us. "

At this stage of the meeting, it turned out that Belousov not only “ran over” Kudrin, but also caught that either in a lie or in unprofessionalism. The words of the Minister of Economy can be interpreted as follows: they say, if someone else continues to pray at Kudrin as an icon, then here is an example when his “far-reaching” predictions and formulas he derived have nothing to do with reality.

It is obvious that after such a Kudrinsky halo in the eyes of those who continued to perceive Aleksey Leonidovich as the main and almost the only economic expert of Russia, it quivered somewhat and partially dissolved in the surrounding Sochi air ...

Kudrin himself immediately tried to defend the still acting head of the Central Bank, Mr. Ignatiev, who attacked already in the direction of Andrei Belousov himself. Ignatiev said that relatively high interest rates on loans are in no way connected with a slowdown in economic growth. Next - Sergei Ignatiev quote:
"The situation with lending we have the one we want."

An interesting movie is obtained. “... which we want” is how? And who are these “we” at all? If Sergey Ignatiev wants Russian citizens to get stuck in mortgage loans at 14-16% per annum, then this is his personal desire. And the pronoun "we" is hardly appropriate to use here. Or Ignatiev has like-minded people who also want the banks to “lomily” interest, which are many times higher than the inflation rates ... Apparently, there is ...

Mr. Vyugin (head of MDM Bank, who attended the meeting) also began to defend the reputation of the freelance forecaster Kudrin. He suddenly decided to remind that Russian lending rates are even lower than in a number of APR countries, where inflation is less than ours.

But if so, and if a decrease in inflation, as the listed experts say, has little effect on the banking sector, and hence on the entire economy, then why are such forces being spent today on reducing inflation barriers? It turns out that someone is still cunning. Inflation simply cannot fail to play a fundamental role in the work of the banking sector, which means that the banking sector itself simply, excuse me, parasitizes on reducing its level. Only here, a number of economists keep saying that banks do not earn anything at all, and therefore they are not guilty of slowing down economic growth. If we take into account how many banks and their branches have divorced in post-crisis years in Russia, they begin to worry about the vagueness that these banks do not earn anything for themselves by inflating the credit sector of the economy.

It turns out that Minister Belousov rightly pointed out one of the sore spots in the non-primary sector of the economy.

After a rather vigorous Sochi meeting, where, in addition to difficulties in the credit system, the growth of the tariffs of natural monopolies and the excessive strengthening of the ruble were attributed to the problems of the economy, a kind of continuation of this meeting took place in Moscow. From the Presidential Administration it was reported that last Monday (late evening), Vladimir Putin summoned Assistant President Elvira Nabiullina, who, by the way, is already preparing to change Mr. Ignatieff as head of the Central Bank, and Deputy Prime Minister Igor Shuvalov.

The meeting continued discussion of economic problems in the country, and touched upon the topic of finding ways to increase the rate of economic growth.

Vladimir Putin at the beginning of the meeting noted:
The problems that we see now associated with the slowdown, but at the same time, the reserves that we have, and the macroeconomic indicators that we have achieved in recent years, give us the opportunity to slowly, in a quiet mode - in a planned I would say, look at what and how it would be possible to adjust in our current economic policy ... I look forward to completing this discussion from you.

The meeting itself turned out to be aimed at giving Putin the task of presenting the final document to 15 in May, which would contain items aimed at bringing the Russian economy to an acceptable growth rate. Vladimir Putin noted that the Russian economy has a certain margin of safety, but it is necessary to hurry with practical changes in economic policy for a full-fledged economic recovery.

It turns out that by May 15 we can learn about a kind of mini-NEP, which will be presented to the president by relevant government ministries and departments, as well as his Administration. Will this economic policy be truly new? - hardly. The government will not take radical measures in the current conditions. However, it is to be expected that in order to achieve at least last year’s level of growth, one will have to take a series of local radical measures. One such step could well be a transparent hint to Russian banks that it would be time to slow down their credit appetites and reduce the burden of percentage pressure on the real sector of the economy. And if we take into account that Belousov’s words about the overestimation of the tariffs of natural monopolies (ЕМ) can also be taken into account, then here we can expect some progress. Just need to remember that opponents of the revision of the credit policy of banks and, especially, EM tariffs will be gained a lot. Namely, these people will hold their hands and feet on the existing economic model, which does not always withstand criticism, but personally suits them completely. So, the primary task of the government is not so much to start creating the final document and submit it to the president, as to step over the personal interests of that category of gentlemen who confuse “personal wool with the state” ...

Ctrl Enter
Noticed oshЫbku Highlight text and press. Ctrl + Enter
We are
Results of the week. “She is not a Jew to me, not a Jean!”Results of the week. "The filtering virus of foot and mouth disease is especially rapidly developing in organisms weakened by nicotine, alcohol, and ... bad blood frills ..."
269 comments
Information
Dear reader, to leave comments on the publication, you must to register.