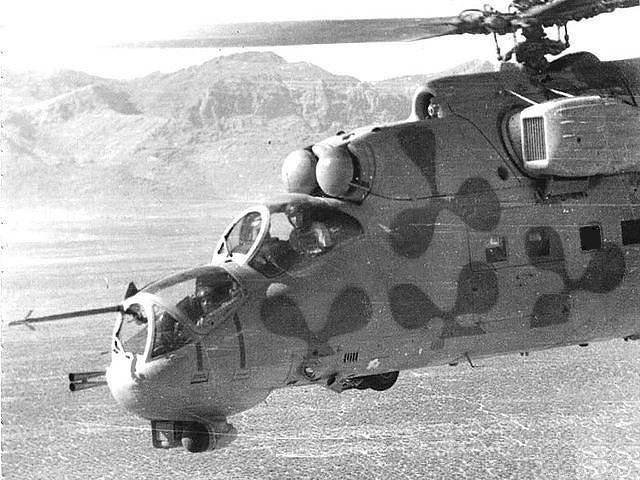 Once, my board had a crucial task - a flight to investigate the weather before flying. This meant that at the beginning of the flight day the squadron commander would fly around our airspace, in which the squadron pilots would then perform various tasks. Then the commander decides on the flight and sets flight missions.

On that day, one of the exercises was planned to land on a self-selection platform. That is, in a given area, the pilot must choose a suitable landing site for the helicopter, determine the wind direction for a steady approach to the site and sit down.

Before the departure, the head of the armament group approached me and handed me some kind of protective iron round can.
“When the commander gives the command, you will insert this figovin into this hole, then you will strike this bullshit here and throw it out,” he rattled quickly, gesticulating.
-?!
“What is incomprehensible, you set fire to the wick — it will smoke, drop it immediately,” the gunman explained and rushed off to the other side.

I must say that I, as a young graduate of a military school, recently admitted to independent flights as a helicopter airborne equipment, was preparing for the first time to fly out on weather reconnaissance, and especially for the first time I had to “strike out” and “throw out” from a helicopter. At the school and on an internship, such "figoviny" did not show us and did not teach them to handle.

I realized that this jar was apparently called a smoke grenade, a “figovina” that needed to be inserted into a hole resembled a big match, and a “bullshit” that needed to be struck on the head of a match was a small rough penny-sized puck.

The flight took place, as they say, in normal mode. The squadron commander, a tall, lean, elderly lieutenant colonel in invariably ironed camouflage overalls and a protective helmet, performed aerobatic exercises at a very low altitude in one of the zones, as a result of which breakfast in my stomach began to think about releasing. Then the commander went in search of a suitable landing site with a self-selection.

Choosing a site in a picturesque valley between two small mountain ranges, the commandment commanded on the intercom:
- Onboard get ready!
“Ready,” I responded cheerfully from the cargo compartment, opening the porthole, squeezing a saber between my knees and preparing myself for setting it on fire.

Arriving at the site, comhesca gave the command to reset the checkers. I struck the fuse once - the wick did not ignite, once again - nothing, a few more times - the result is zero. Worried about the awareness of the huge responsibility for the success of the flight mission, in which I was a direct participant, I shook the lighter with shaking hands, the benefit was smoking, and somehow still arson this evil wick. Checker bullet flew into the "window".

After turning the helicopter for landing, we did not see any smoke at the site. Comesca turned his head towards me and looked questioningly. I was embarrassed, with an expression of bewilderment on my face, shrugged.

The commander correctly determined the direction of the wind, for some reason only to him, as the landing and takeoff were successful. We began to gain altitude to return to the airfield and suddenly, right behind a low mountain range, we saw an interesting picture.

In the rays of the bright morning sun of the Caucasus, a picturesque vineyard scattered its green bushes through the valley. Closer to the ridge, among the vines, stands a small wooden house of the watchman, from the windows and doors of which thick smoke erupts acrid orange smoke. In the direction of the house, a short, old man of “Caucasian nationality” runs, skipping and, somehow unnaturally bent over.

I think that the watchman, who in his long life was accustomed to constant armed conflicts in the region, thought about the start of a “new round of interethnic tension”, which for some reason began at his vineyard.
Yes, well, flight. Sorry countryman.

Ctrl Enter
Noticed a mistake Highlight text and press. Ctrl + Enter
We are
Conversations with Timofey Panteleevich Punev. “No air force had a bomber similar to the Pe 2.”Turntables, Afghanistan. "Eight"
13 comments
Information
Dear reader, to leave comments on the publication, you must to register.