Hagel and Ya'alon: a talk for three billion

April 24 2013
76
On Monday this week, while in Tel Aviv as part of a Middle Eastern tour, Pentagon chief Chuck Hagel made it quite straightforward to the world’s public that the administration of Barack Obama would support Israel’s military superiority in the Middle East. According to him, which leads InterfaxThe United States will allow Israel to purchase new types of weapons, including missiles and advanced radar for fighters. Hagel confirmed that the United States is letting Israel itself decide whether to attack Iran and, if necessary, when. 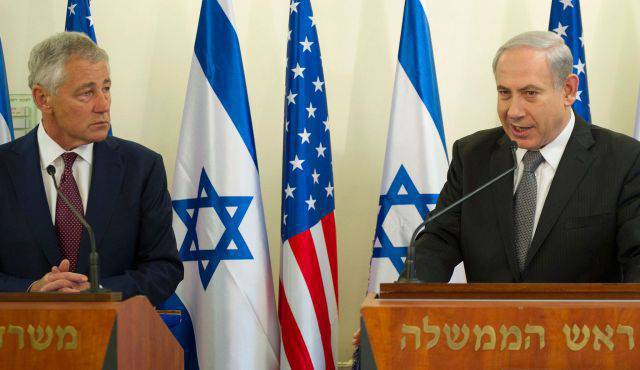 Weapon supply the United States are going to not only Israel. Speaking at a press conference in Tel Aviv after talks with his Israeli counterpart Moshe Ya'alon, the American defense minister called the planned arms shipments to US allies in the Middle East a clear signal to Iran, demonstrating the possibility of using force to neutralize the nuclear threat.

10 billion-dollar contracts involve the sale of V-22 Osprey military transport converters to Israel, KC-135 tanker aircraft, anti-radar missiles and radar equipment for installation on combat aircraft to Israel. The UAE will receive F-16 fighters and missiles for them. The same air-to-ground missiles of the United States are going to sell to Saudi Arabia, which has previously purchased American fighter jets, reports Rosbaltreferring to online media.

Chuck Hagel said: “I don’t think there can be any doubt that this is another very clear signal to Iran.” According to him, the use of military force should be the last means of deterring Iran on the path to the possession of nuclear weapons. Currently there is still time for diplomacy.

The upcoming arms supply contracts should, first of all, strengthen Israel’s high-quality military superiority in the region, C. Hagel said. He added: “Every sovereign state has the right to self-defense and self-defense. Iran’s nuclear program is a threat, and Israel itself decides how to protect itself from it. ”

Scott Bobb ("Voice of America") quotes the words of the head of the Pentagon that the US government intends to maintain the status of the dominant Israeli military power in the Middle East: “We are ready to provide Israel with any necessary support so that Israel can maintain its military superiority over any state or coalition of the states of the region. This also applies to non-governmental organizations, if we take into account the complex security challenges that the United States and Israel have to solve in the region. ”

Israeli Defense Minister Ya'alon, in turn, noted that so far there are non-force options for solving the Iranian nuclear problem, which should be given priority. “We believe that the use of military force, which has already been discussed enough, should be the last resort,” said Mr. Yaalon. “Other tools should be used now.” Among them, he singled out diplomacy, economic sanctions and "moral support" of the opposition forces on the eve of the close presidential elections in Iran.

Chinese agency Xinhua highlights a different aspect of bilateral negotiations. Citing the words of Chuck Hagel, Chinese journalists particularly dwell on his statement that the agreement on the supply of weapons between the American and Israeli sides is an important step towards strengthening bilateral relations in the field of national defense, thanks to which in the next few decades Israel will be able to secure a military air superiority.

Also, the Chinese point out that the parties paid attention to the negotiations on the situation in Syria, pointing out that the use of chemical weapons in this country is unacceptable.

Israeli edition "Cursor" quotes the words of an unnamed senior Pentagon spokesman who said in an interview with The New York Times that the United States continues to aim at maintaining Israel’s high-quality military superiority in the Middle East, especially in the face of the Iranian threat. "Our task is to ensure that Israel has the best army in the region to contain Iran," he said.

The “Cursor” also tells us that combined aircraft — convertible planes combining the design features of an aircraft and a helicopter — were tested by the IDF General Staff Head during his last visit to the USA. The impressed Ganz expressed the wish to purchase this equipment for the IDF.

Yuri Paniev ("Independent newspaper"), referring to the Israeli edition of "Globes", writes that the total value of the US contract with Israel is approximately 3 billion dollars. The purchase of equipment is expected to be made at the expense of the annual US military assistance to Israel. In 2012, the amount of such assistance amounted to 3,1 billion dollars.

Speaking with an NG correspondent, President of the Middle East Institute Yevgeny Satanovsky said: “Just look at the range of military equipment that the US will sell to Israel to conclude: the war with Iran is on the nose. Barack Obama, who recently visited Israel, received a promise from him for three months not to beat Iran. This period expires at the end of June, after the presidential elections in Iran, and from the middle of July anything can be expected in the region. Polishing of the military operation is already underway, and further depends on Iran. ” The expert also noted: “Paradoxically, Saudi Arabia, Qatar and the rest of Israel’s enemies from among its neighbors are most interested in Israel bombing Iran’s nuclear facilities. They themselves will not be able to cope with Iran. Their encounter with Iran is a meeting of a pack of poodles with a Caucasian shepherd dog. The Senate resolution, which obliges Washington to enter the war on the side of Israel in the event of an Iranian-Israeli conflict, is a clear signal. ”

This is the second clear signal in April. The first should be considered information that the American experimental laser will travel to the Persian Gulf. On "InoSMI" The note of Dion Nissenbaum from "The Wall Street Journal"who told the general public that the US Navy is going to deploy experimental laser weapons in the Persian Gulf, and there it can be used to prevent Iranian small landing craft from attacking American warships.

The system, worth 40 in millions of dollars, will be installed aboard the USS Ponce, the amphibious assault ship that is used for mine detection and clearance, as well as humanitarian operations. The laser weapon system, a demonstration model assembled by the Naval Systems Command, is now temporarily installed onboard the USS Dewey missile destroyer in San Diego, California.

The laser showed successful results during testing, destroying all 12 targets: UAVs and small ships. The system uses directional energy to neutralize sensors or burn holes in the surface of an airplane or a ship. The weapon cannot be used against missiles or jet planes (due to limited coverage), but it can be effective in the fight against Iranian speedboats and local UAVs.

This is what Sergey Vasilenkov tells about this miracle laser (Pravda.ru):

“This is a real combat use of directional energy weapons. The new combat laser can perform many tasks - ranging from “blinding” enemy sensory devices without physically affecting people and ending with the destruction of UAVs and strike boats. While this weapon is not capable of hitting supersonic fighters, as well as missiles on approach, however, development continues, and it is a matter of time. The main advantages of the new laser include the almost endless “warhead” (the gun works while the ship generates energy) and the low price (one shot from the gun will cost about one dollar). Such weapons can cause serious damage to the Iranian army, if, of course, it comes to a military operation. "

Own comment of the current situation around a possible conflict between Israel and the United States with Iran was given on the resource Iran.ru.

According to observers, Washington has begun to implement the plan of the current White House administration to consolidate American positions in the Middle East on a new basis, taking into account the withdrawal of the contingent from Iraq, the upcoming withdrawal from Afghanistan and the upcoming tasks of “restraining” Iran.

“... The issue of $ 10 billions from arms contracts, for all the grandeur of this amount, is quite secondary. By investing this money in a strategic partnership, the United States does not risk anything, partners are fully solvent, even Jordan and Egypt, for which the same monarchies of the Persian Gulf are guaranteed (and, as it turns out, now also “democratic” Libya). ”

Much more important, analysts say, is the achievement of political goals. There are three of them.

1. Washington needs to dispel the fears of Israel and the monarchies of the Persian Gulf that they have lost the status of strategic partners of the White House. Tel Aviv and Riyadh can build such fears on the basis of reducing the US military presence after the withdrawal of contingents from Iraq and Afghanistan, reducing the US's dependence on energy imports from the region, the financial crisis in America, and at the same time the strategic "Asian turn" of the United States.

2. The United States is interested in strengthening the regional anti-Iran coalition. The fear of the monarchies of the Persian Gulf before Tehran, the hatred of Tel Aviv and the regional ambitions of Ankara fit almost ideally into this anti-Iranian coalition, according to the authors of the material.

3. The White House administration needs to provide external support for the internal stability of the allied monarchies of the Persian Gulf and Jordan. This is of particular importance in the formation of the Sunni coalition, designed to break the emerging "Shiite crescent" from Kuwait and Bahrain to Pakistan.

There are smaller tasks that can be solved by creating such a coalition and its weapons. This may include the "Syrian knot", and the consolidation of Egypt in the alliance, and the alleviation of the problems of Turkish-Israeli relations.

According to analysts of Iran.ru, the strategic goal of the Middle East coalition is quite obvious: to ensure US dominance in the region through a system of alliances and alliances. Coalition building is easy. The case remains for small - “reformat” Iran ...

Thus, the US arms of the Arab countries and Israel, the organization of the coalition along with the laser plans is nothing more than the intimidation of Iran. Bullying is the most outspoken, straightforward, as evidenced by the deliberate bluntness of Chuck Hagel at a press conference in Tel Aviv.

If you need to unleash a war, the peacemaker Obama will not ask anyone, even Congress. However, this time speech not about Libya, and most congressmen who do not want to “lose” the Middle East will support the president, and at the same time he will be rehabilitated by hawks like the old white-haired McCain. Presumably, the issue with Iran will be clarified very soon: after the June presidential elections in this country.

Observed and commented on Oleg Chuvakin
- especially for topwar.ru
Ctrl Enter
Noticed a mistake Highlight text and press. Ctrl + Enter
We are
Projection of forceResults of the week. “We were sincere in our delusions!”
76 comments
Information
Dear reader, to leave comments on the publication, you must to register.