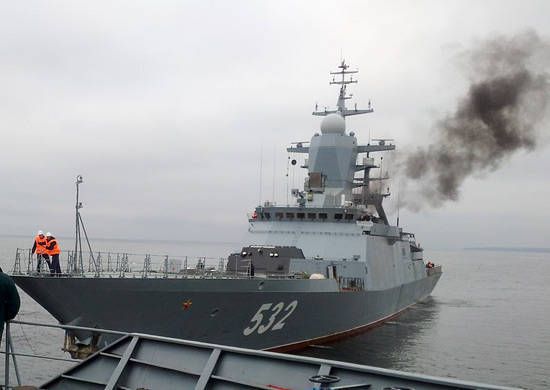 
During the first stage of the GHI, which lasted just over a month and ended on April 11, representatives of the factory test team, together with the crew of the ship and members of the state selection committee, conducted maneuverability and speed tests of the corvette, tested the operation of all units, systems and components, navigation and radio equipment, also weapons "boiky".

In particular, missile and artillery firing at surface and air targets were carried out, a complex of torpedo firing and depth bombing was carried out, the tasks of landing an anti-submarine Ka-27 helicopter on the deck of the corvette and the anti-aircraft defense tasks were worked out.

The ship passed the test program successfully, it is now preparing for an audit, after which the acceptance certificate will be signed.

After the audit of the ship’s technical equipment is completed, work on its final finishing and painting will be carried out. All work will be completed within a month.

The second production Boyvet corvette of project 20380 was laid down at the Severnaya Verf shipyard in July 2005 and launched on April 15, 2011. The lead ship of the series, the “Guardian” corvette, was handed over to the Baltic the fleet in 2007, the first serial Corvette Corvette was transferred to the BF on October 14, 2011.

The ships of this project are intended for actions in the near-sea zone and for conducting combat with surface ships and submarines of the enemy, as well as for artillery support of the amphibious assault forces during amphibious landing operations.

Ctrl Enter
Noticed a mistake Highlight text and press. Ctrl + Enter
We are
The action “Military service under the contract is your choice!” In Rostov-on-Don: future contract servicemen, exhibitions and “Russian Knights”Corvette "Boyky" proceeded to state tests
14 comments
Information
Dear reader, to leave comments on the publication, you must to register.