Be able to recognize and destroy enemy tanks 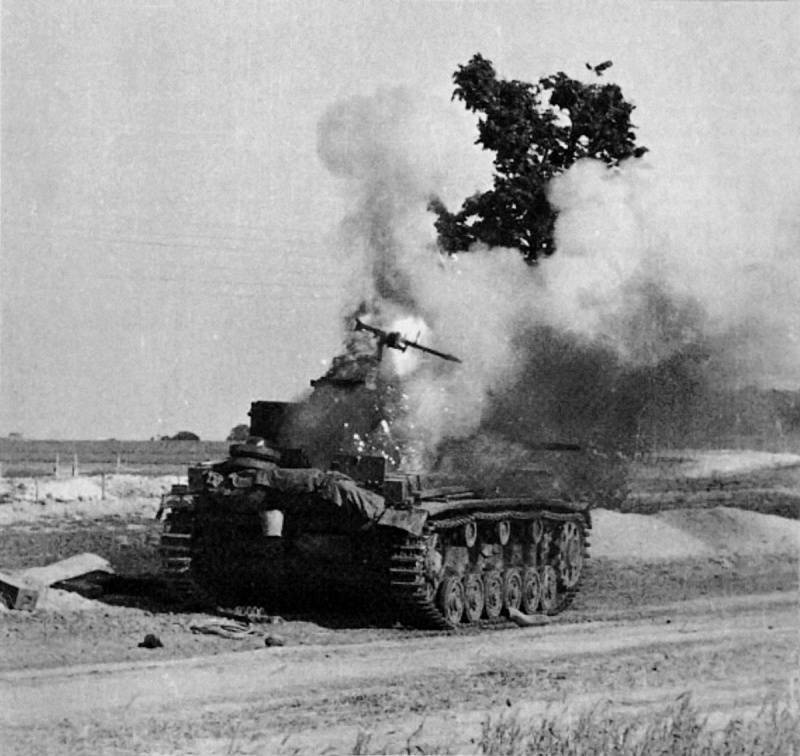 Burned down German tank PzKpfw III in the USSR in June 1942.

NATISK of the fascist armored hordes of the Red Army opposed the mighty force of its weapons and the selfless heroism of the fighters. Germany lost over 24000 during the year of World War II tanks. The experience of the war showed that fascist tanks can be successfully destroyed by individual soldiers.

However, in order to destroy enemy tanks, you need to be able to recognize them and know their most vulnerable points.

From the anti-tank guns it is best to hit the cracks and the bottom of the tower. If the tank passes along the front, it is best to aim at the side of where the driver is, the gas tank, or the back of the engine.

Bundles of grenades and anti-tank grenades are best thrown under the tracks, under the bottom and on the roof of the tower. Incendiary bottles to throw at the tower of the tank, so that the combustible mixture, spreading, flooded the inspection gaps, got into the motor group, into the gaps of the hatches and burned the crew.

The fascists in the war against the USSR use not only German tanks of various systems and tanks of the countries occupied by Germany. This article lists the ten most common types of tanks with which fighters are most often encountered in combat.

Most of the tanks in the German light-weight army. Light tank "T-2" (Fig. 1) weighs 8 tons. Armed with a 20-mm cannon and one machine gun, the crew is three people. The most vulnerable places are shown in the figure by arrows.

In the attack, the fascists use the medium tank T-3 (Fig. 2) to cover the light tanks. Tank weight - 20 tons, weapons

- three machine guns. The speed of the tank to 40 kilometers per hour.

(The style, figure captions and spelling of the article are preserved. Ed.) 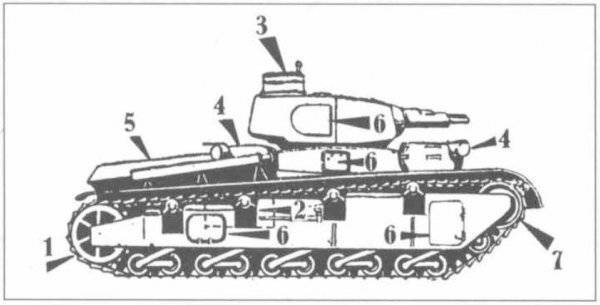 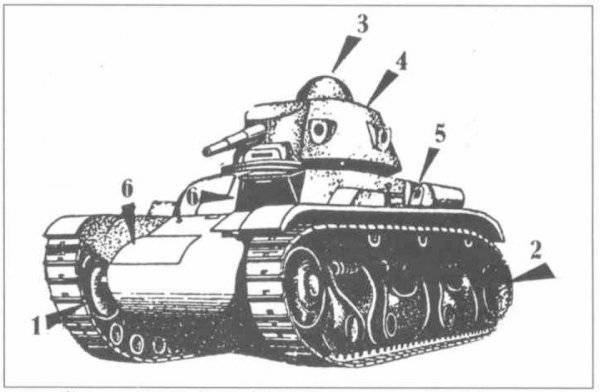 Each fighter should also be well aware of the tanks of the occupied countries. The French light tank P-35 (fig. 4) weighs ten tons. Armed with a 37-mm cannon and machine gun. Team - two people. The thickness of the frontal armor -45 millimeters, side and tower - 40.

There is also a French medium tank B-1. It weighs 27 tons, armed with two guns and two machine guns. The speed of the tank is up to 40 kilometers per hour. The French 3-C heavy tank is a huge land dreadnought. It weighs -75 tons. Armed with one 75-mm cannon and one 155-mm howitzer. In addition there are four machine guns. Team - 13 people. But the speed does not exceed 13 -15 kilometers per hour.

In the southern parts of the front, our infantrymen meet with Italian tanks. These are imperfect machines. The most common Italian tank L-6. Weight - 6,5 tons, speed - 36 kilometers per hour, weapons - one 20-mm cannon and one machine gun. Crew -2 man.

During the fighting, every soldier realized that with a bold attack on a tank he could destroy any enemy vehicle.

Material provided by A. Dzvydenkov, Yaroslavl
Ctrl Enter
Noticed oshЫbku Highlight text and press. Ctrl + Enter
We are
Service history "Admiral Lazarev" - "Red Caucasus"What you need to know the warrior of the Red Army about the fighting receptions of the Germans
15 comments
Information
Dear reader, to leave comments on the publication, you must to register.