April 24 2013
116
Anyway, whatever they say, there are samples weapons, which can be considered “eternal”, such a weapon has not been used by the army and police for a long time, but still it is popular, it is known, and it is not forgotten. So, one of the most prominent representatives of such weapons is the Mosin rifle. His weapon has definitely served, and should have retired a long time ago, but the rest of the rifle only dreams. Well, in any way the simplicity and characteristics of the weapon do not allow the fans of the weapon to sleep in peace, for which companies that are engaged in the release of additional adaptations to the weapon, as well as its tuning, are extremely happy. At this time, the company Archangel Manufacturing took a breath of new life. As you know, the gods do not mold pots and do not cast bullets, let's see what the archangels are able to do. 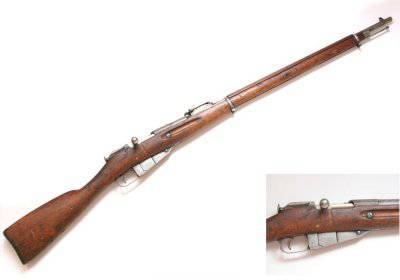 The company offers to breathe new life into an old rifle by replacing all wooden with modern polymers and light alloys. I’ll say right away that after such a replacement, the weapon becomes not so unrecognizable, but an uncrowded eye may not recognize the creation of Mosin. It seems like a familiar weapon, but some not so. The main reason for doubting that the updated Mosin rifle is the well-known “Masyanya”, for me personally there was a detachable store, an old bolt giving out giblets, they did not shove iron, for which many thanks. As the manufacturer claims, the updated weapon will become more accurate, which we naturally do not believe. More convenient is possible, and only because of this can the characteristics improve.

A rather remarkable detail in all of this is that the Mosin rifle in the US became the best-selling rifle in the 2012 year, that is, the company’s target audience is quite large. In this case, it is noted separately that it is possible to upgrade not only the original weapon, but also what is created on its base, apparently, it means a remake of various companies. Let's try to figure out what is so unique in the proposed weapon upgrade. 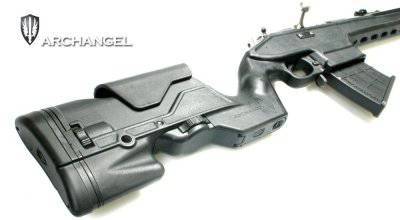 First of all, the presence of a full-fledged handle, to the bottom of which the rifle butt is attached, is striking. The butt itself is governed by its length, which is important for hunters, since the thickness of clothes in different seasons is different, so now the weapon can be adjusted more accurately. In addition, the rifle is adjustable emphasis on the cheek, which is also a useful function, especially when using an optical sight. Adjustments are made using adjusting nuts protruding on the sides of the butt, so that the process of fitting the weapon is fast enough and can be performed without detaching the butt from the shoulder. In addition, there is a place for mounting bipods, which, of course, are not included. Ideally, of course, I would like to see a modern seat for optics, but there already requires a deeper intervention in the design of the weapon, rather than just replacing wood.

As mentioned above, the update allows the use of detachable stores. The manufacturer offers shops with a capacity of 5 and 10 cartridges. It is difficult to say whether such an improvement will turn out to be a good thing, although other tuning options for adding detachable stores are in most cases quite successful. This is probably the only node that I doubt. Also confuses the weight of the proposed product. According to the manufacturer, the weight of all this happiness is only 228 grams. On the one hand, the maximum reduction in the weight of the rifle is good, and if even these grams have invested sufficient strength, then it is generally wonderful, but you should not forget about such a phenomenon as recoil when fired. It seems to me that in this case the heavier version of the weapon will have greater accuracy, although everyone here is already free to choose what is more important for him.

Well, finally, the most important moment. The price of this improvement is almost $ 200, 20 will have to be paid for a magazine with a capacity of 5 and 25 dollars for a shop with a capacity of 10. It is clear that prices are not so high, but if you think about it, then a toad would strangle me personally. Yes, and to make a modern rifle out of legend, the hand would probably not have risen, although no one bothers to change the plastic for a tree.

Ctrl Enter
Noticed oshЫbku Highlight text and press. Ctrl + Enter
We are
Berthier rifle - a rifle for the Zouav and all the restSVT. Career rifle
Military Reviewin Yandex News
Military Reviewin Google News
116 comments
Information
Dear reader, to leave comments on the publication, you must to register.