Syria - a stronghold of resistance 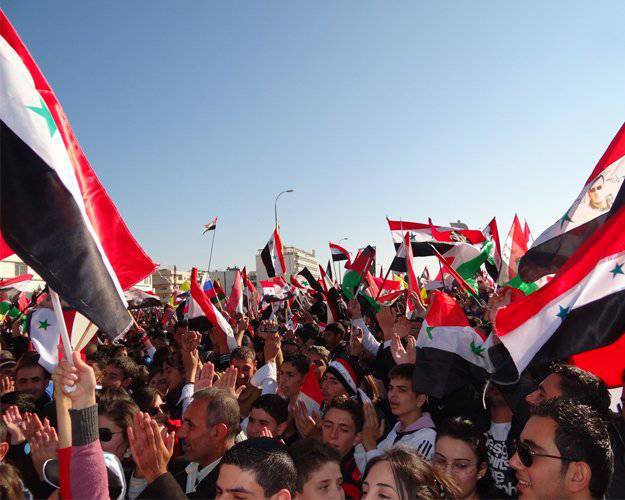 21 April Syrian President Bashar Al-Asad received a friendly delegation from Lebanon. Among the guests were representatives of the patriotic parties and movements of this country, public figures.

Speaking about what is happening in Syria, the head of state stressed that the situation in the country is already improving. This is because the people retain their steadfastness, they are united around their fighting army. The president said that there can be no reconciliation with the terrorists, and Syria will fight this monstrous phenomenon. At the same time, the country's leadership will continue the implementation of a political program to resolve the situation, drawing into the dialogue all those who wish to conduct it.

He noted that there are great similarities between Syria and Lebanon - both countries have enormous cultural wealth, the society in both states is diverse. All this should help these countries to preserve their originality and successfully resist foreign forces that wish to split the entire Middle Eastern region into small states, torn apart by religious and national contradictions.

ATS President said that new unifying ideas are needed at this stage. He recalled that Syria and Lebanon were the first to repeatedly come up with such ideas. Now, when all the inhabitants of the Middle East are faced with attempts to split the region - and we are actually talking about the new Sykes-Picot plan, which at one time already divided the Arab nation into many small states subordinate to someone else's will, to counter such plans it is necessary to update and implement into life unifying ideas.

Friends from Lebanon thanked Syria for its heroic resistance to the foreign conspiracy. According to them, Syria today protects the entire Arab nation, and therefore, for its part, all Arabs must stand up for it in order to thwart hostile plans.

The Lebanese delegates said that Syria remains a stronghold of resistance. And the names of all the soldiers and civilians of the country who died in the fight against terrorism - the Arab nation can justly be proud.

In the world support the struggle of Syria

The resilient resistance of the SAR to the plans of the new colonialists enjoys great support in many countries of the world. Citizens of many states join Syrian communities abroad, who express loyalty to their homeland.

In Russia, 21, April, was a celebration of Independence Day. Syrian students, representatives of public organizations and ordinary citizens who support Syria and come to congratulate her on the holiday gathered in the building of the University of Friendship of Peoples in Moscow. The SAR Ambassador in Moscow, Riyad Haddad, thanked the participants and assured that his country would still stand firm against the terrorists and the forces that support them. On behalf of the Syrian people, he expressed gratitude to Russia for its position.

In Bratislava, the Syrians, together with the citizens of Slovakia, held a joint prayer for the restoration of peace in Syria. It was attended by representatives of all religions, science and culture. Many of them were holding Syrian flags.

In France, a conference was held at which the Syrian-French relations were discussed. Its participants sharply condemned the policy of the current leadership of France, which aims at a new colonization of the SAR. They noted that France, along with the monarchic regimes of the Gulf, obediently obeyed the orders of the United States and supported the terrorists. Syrians, French, and citizens of other countries participating in the event expressed solidarity with the struggle of Syria, its people, army and leadership. They took the initiative to assist the families of soldiers and security forces who were martyred at the hands of bandits.

In Argentina, a rally was held under the motto "Syria for all." Its participants condemned the support of terrorists from abroad and the dirty smear campaign against the SAR, launched by the Arab and Western media. The speakers spoke ardently about the exploits of the Syrian Arab army, who defend the country and stand in the way of foreign interference in its affairs.

In Tunisia, a mass demonstration of solidarity with the Syrian people took place. Despite the treacherous policy of the “son of the Arab spring” Gannush, the simple people of Tunisia understand that Syria today stands guard over the entire Arab world. Thousands of demonstrators marched through the capital with Syrian flags and portraits of Bashar Al-Assad.

So far, Syria’s true friends are arranging events in its defense, and even come to Damascus to meet with the President - there are also those in the world who rebuke the sacred word “friend” itself.

A regular meeting of the so-called “friends of Syria” took place in Istanbul - you look at these - and it is immediately clear: God bless, from such friends, and somehow deal with the enemies ourselves. In this gathering, US state secretary John Kerry took part - it is immediately clear what kind of "friendship" he is looking for.
However, these "Friends of Syria" led by the United States fused not only the holy word "friends." They even managed to shat out the famous slogans “Freedom, equality and fraternity”, announcing a stinking Russophobia statement. This “document” expressed open hatred against Russia for the fact that it did not want to participate in this sabbath, for the fact that Russian Foreign Minister Sergey Lavrov criticized this meeting (and he said in extremely correct formulations that it would not go on benefit of a peace settlement).

In a statement, the “oppositionists”, in particular, said: “Since Russia dissociated itself from the“ friends of Syria ”from the group that includes more than 100 countries, it isolates itself from the international community and opposes values ​​such as freedom, equality, fraternity and against fundamental human rights. "

Only one thing is forgotten by the Syrian “oppositionists”: it is against them that most of humanity stands. Yes, the club allegedly "friends of Syria" includes more than 100 countries, but this does not mean the whole world community. The population of only the BRICS countries, opposing such a strange notion of friendship, exceeds the population of these 100 small states - the puppet of the United States and the West. And then there are many other states that even more strongly condemn anti-Syrian politics - for example, Latin American countries, Iran. Even in the West, there are more and more voices against the support of militants.

Warmed by an anti-Russian statement, the “opposition” went into even greater fury and called on the “friends of Syria” to bomb the country and introduce the so-called “no-fly zone” over it. But they tried to douse this barbaric appeal with a sauce of humanity: they said that the supposedly no-fly zone was necessary for refugees to return to their homes without fear of government air strikes aviation.

Of course, this humane “sauce” was originally prepared from rotten components: the whole world saw that the so-called “no-fly zone” over Libya actually resulted in air strikes by NATO forces that did not spare anyone, in the destruction of the country, in the ruthless bombardment of residential buildings, hospitals , power stations, schools - everything that the people have been creating for many, many years through hard work.

Even the dregs of humanity did not want this - Vlasovites. They helped the Nazis after they invaded, but did not call them to bomb their own country!

And then at the “friends” sabbath, John Kerry spoke. He promised to double the help to gangster groups, which, in turn, made a promise ... to abandon terrorist activities. Sensation: the wolf refuses to eat hares and carry sheep - he undertakes to eat only grass and flowers. He only asks to sharpen his blunt teeth - apparently, it was easier to chew grass.

Kerry said that the help of the "opposition" will include the so-called "non-lethal" equipment - not only food rations and first-aid kits for militants, but also bullet-proof vests, night-vision equipment, communications equipment. But if the militants ’desire to abandon terrorist activities against the army and the people of Syria were sincere - then why would they need all this equipment? At the negotiating table in a flak jacket to sit?

The US Secretary of State not only promised to allocate an additional amount to help the gangs - he urged other countries to do the same to bring this amount to 400 billion dollars.

Firstly, there is an unfortunate regret - how much useful things could be made with this money for the hungry children of other continents, for these countries themselves, where social problems have not gone away, but only driven into the depths.

Secondly, I want to ask those who allocate money to criminals and demand this from other countries: are you a suicide club? After all, no one ever knows and can not know what thoughts these terrorists — the fighters against the “infidels” - will strike tomorrow, and how many more Boston criminals can organize with money allocated by the West itself!

Ctrl Enter
Noticed a mistake Highlight text and press. Ctrl + Enter
We are
Bashar al-Assad: In Syria, not the “revolution” that the enemies are talking about, but the revolution of the army and the people against terroristsBashar al-Assad: Captain does not run from the ship
74 comments
Ad